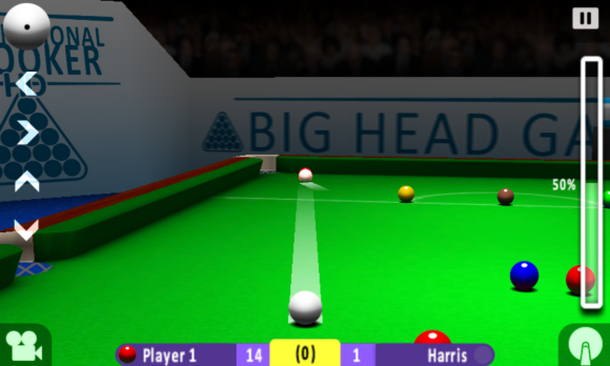 I don’t consider myself to be a major snooker fan; but for whatever reason, the game of snooker has always fascinated me. The snooker game of Archer MacLean transfixed me and so far, very few snooker games have come close to this one. That is until the launch of International Snooker.

Before I get into the specific details of this game, I will do my best to describe what Snooker actually is. You can probably guess that Snooker is similar to pool, but has 21 balls and the scoring system is somewhat progressive.

Big Head Games is behind the development of this Windows Phone based game. This offers a digital recreation of the sport, based on the tournaments that gives away multi-million dollar prizes to winners…real money!

International Snooker offers several modes of play, with the option to play mini-tournaments as well. Without heading to the local snooker hall, this is probably the closest you can get to playing snooker virtually. International Snooker is so realistic, you actually have to really contentrate and focus on angles, and even selection your shots.

When you first get started, you will notice that controlling the game with your fingers can is a bit tough. However, as you progress things will become easier. You can bring changes to the various settings available as well.

You need to earn the most number of points before your turn ends, so that you can unlock the numerous achievements of International Snooker. For lining up shots, different controls are there to help you out. A guide is always there to help you when you try to make the shots; however, you can disable them as well. Position the camera in the direction in which you want the cue ball to take, add weight or spin, and finally apply power on your shot.

You will find several digital opponents on your way to success. Each of them has his own strengths and weaknesses, just as it is in the real world of snooker. Your chosen skill level will often decide how hard you find it to defeat those players. However, with a bit of practice, all of them are beatable.

International Snooker is a premium game, but is not compatible with Xbox Live. The game is really good (Actually better than many other games which have this integration enabled), so this is really a shame!

A game that deals with sticks and balls more than likely finds it tough to create an exciting gaming experience for the players. Luckily, with International Snooker you don’t really have to worry too much. Be it striking of the cue ball or travel of the other colored orbs, everything looks pretty convincing. With different shot strengths, you will get different end results. The same can be said when you use various angles to strike the cue ball.

The visuals may not be amazing, but I still feel that it’s good enough for a mobile game. The game comes with a theme tune. There are in-game soundtracks for things such as: one cue ball hitting another or the cheering of the audience. The balls can be a little clattery at times, but that’s how International Snooker manages to capture the atmosphere of a real snooker game.

For many, the game looks like a simulator, but believe me it is fun and tactical. The game can easily turn intense within a few hours of play. There are many games which have better gameplay, visuals and controls, but remember, International Snooker is pretty much dedicated to fans of a single sport only. The game is not free to download, but comes at a small price of $2.99. If you are a real fan of Snooker, the price should not deter you from trying International Snooker out. Once you play it, you will fully understand you made a good game investment.