Injustice: Gods Among Us Review

Injustice: Gods Among Us is a game that will delight many. It will also infuriate some. On one hand, it is a slick and accessible fighting game in which you get to play as a variety of heroes and villains from the DC Universe. On the other hand, hard-core Mortal Combat fans will no doubt have complaints at the game’s forgiving gameplay and simplicity. But hey, that’s such a common theme of debate within the gaming industry these days I don’t really want to dwell on it too much here. That said, NetherRealm Studios has created a fun and brutal fighter that will be enjoyed by most. 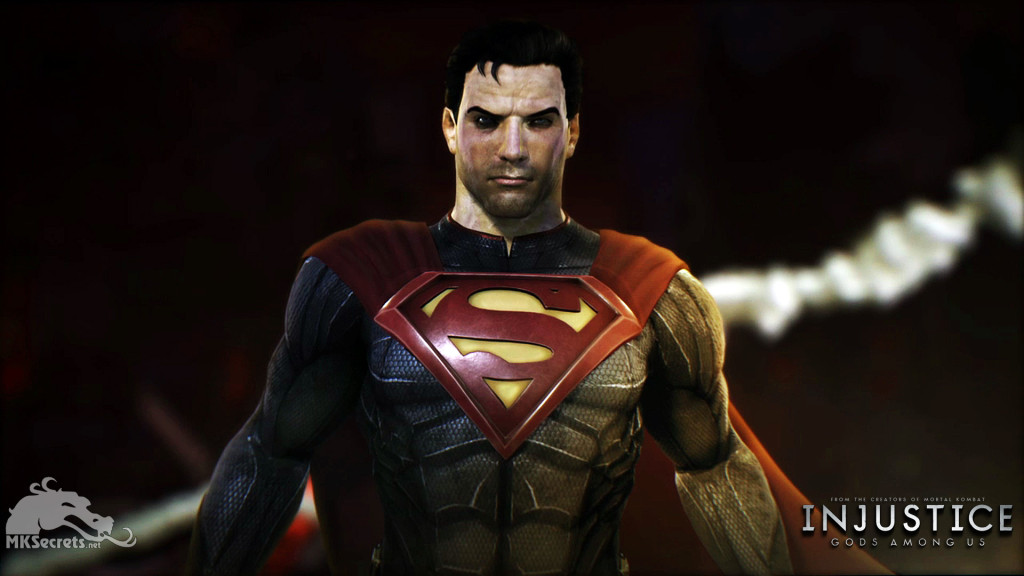 Great Story in Injustice: Gods Among US

The first thing you may notice when playing Injustice: Gods Among Us is that it has a story. Yes, this beat ’em up has a proper story, far beyond that of any fighting game I’ve ever played. It runs something like this: in an alternate reality Superman has gone mad with grief and rage after being tricked by The Joker into killing Lois and his unborn child (Rather macabre, I know). In an effort to end violence and to bring about world peace, Superman creates the ‘One Earth Government’ led by himself. The road to hell is paved with good intentions however, and Superman’s regime turns out to be rather despotic and totalitarian.

Superman demands absolute subjugation and kills anyone who disagrees with him. In this alternate reality, every superhero has joined Superman – or is dead. Except one that is. Can you guess who? You play as heroes from another reality who have been dragged through to this world to help fight against Superman’s regime. This leads to some entertaining fights as your heroes face off against their doppelgangers. It’s all slightly ridiculous and feels like a rather contrived method of getting the player into battles and I’ve found that the cut-scenes in between to fights to be overly long at times. That said, it is kinda nice to be given a reason and context (however token) to the individual fights.

But let’s be honest, you’re not going to base your decision on whether to pick up Injustice based on how solid the story is, so let’s take a look at the gameplay. In some regards, Injustice does feel like a re-skinned Mortal Kombat.  The staccato nature of the fighting feels immediately familiar. From the way you juggle opponents in the air  to the feel of the combos and special moves – NetherRealm Studios haven’t moved far from the  Mortal Kombat formula. And who could blame them? Mortal Kombat is one of the most successful fighting franchises of all time, with a dedicated, hard-core following. It makes sense to attempt to recreate the same success here. 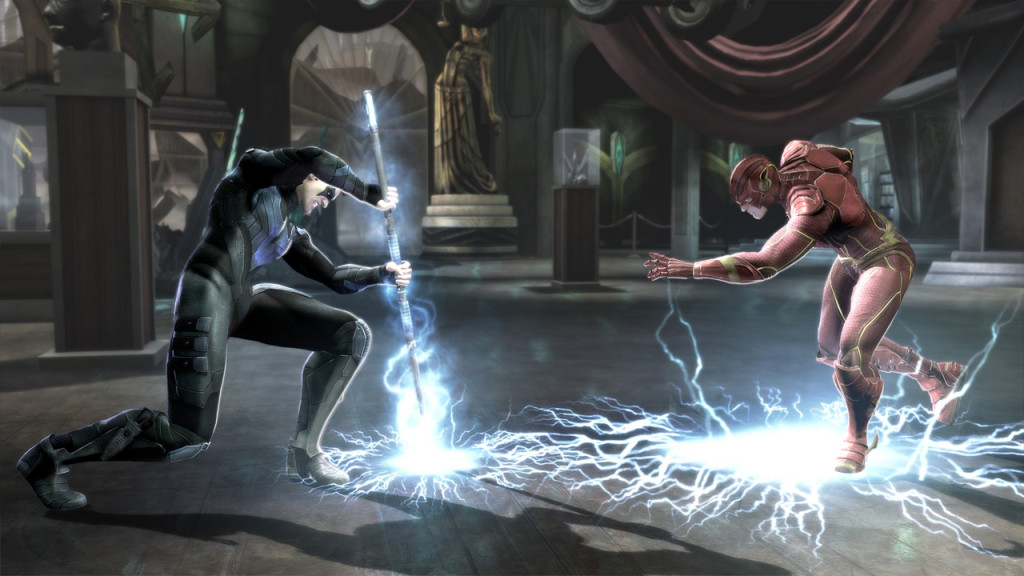 There are obvious differences to the gameplay, however. The first, and probably the most talked about is how accessible Injustice is to new players. Special moves are blindingly straightforward to pull off. Once you have filled your power bar, all you need to do to activate a special is press both triggers – this unleashes a devastating attack. Although its possible to dodge or block the first attack of a special move, thus deactivating the whole thing, they are so incredibly effective that they serve as a massive leveler between beginners and more veteran players. Injustice: Gods Among Us is also very lenient in terms of its combos. In essence, these powerful combos are remarkably easy to pull off and require a very low execution barrier. In previous fighting games, Mortal Kombat in particular, these barriers are far higher – requiring much more skill and precision. For these reasons I cannot see Injustice becoming a popular choice in the competitive gaming world.

Injustice is all about attack. While you can block by holding back, you rarely find the need to do so. This is probably fitting for a game that pits super-heroes against each other. But it also makes it really, really fun. Battering your opponent around the environment is immensely enjoyable thanks to a couple of new features.  Players can use objects from the environment to gain the advantage against their opponent. So you can throw cars or fire missiles. These cause a great deal of damage compared to normal attacks and means you have to give far more thought as to where your characters are positioned. Different characters utilize the environment in different ways. The lighter, quicker characters like Green Arrow may use an overhanging chandelier to swing gracefully over the head of their opponents. On the other hand, beefier characters will just bring said chandelier down on their enemies’ head. 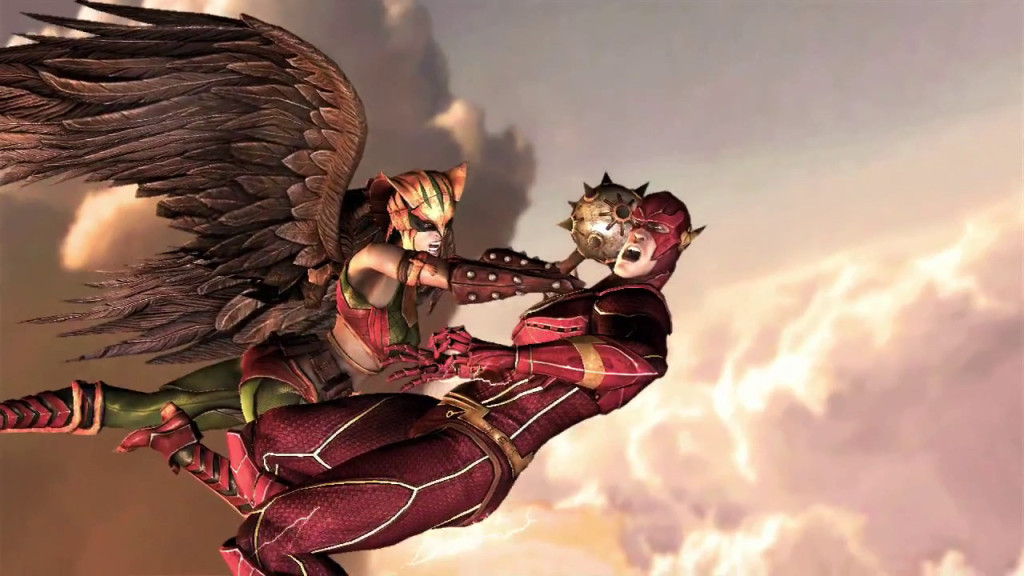 On top of this, you can smash your opponent through to other sections of the map. This, combined with the way the scenerary slowly degrades and turns to rubble as you fight, serves to give the arenas a fluid and dynamic feel. They are not simply pretty 2D backgrounds but are interactive and provide tactical options during the fighting.

Injustice: Gods Among Us has a plethora of features to be enjoyed. Although some are perhaps more enjoyable than others. The single player campaign is sporadically broken up by quick-time events and mini games. Does anyone actually like quick-time events? I’d much rather do the fighting myself, in real time, than press random buttons while prompted in what is, essentially, a cut-scene.  I mean, either have a cut-scene or let me play the game! The mini games are pretty … well, meh also. There doesn’t seem to have been much effort put into them.

There are more mini-games and fun to be had in the S.T.A.R labs challenges. While the single player campaign will take about 3 hours to complete, these challenges provide a wealth of single player content. Each challenge is unique and can be a fun diversion from beating super-heroes senseless. And there’s lots of them to play through. 240 in fact. Some of them seem ridiculously and unfairly hard but maybe that’s just me.

Injustice: Gods Among Us – Online Issues

There are a couple of problems with the online component too. Although the characters seem fairly well balanced, on the whole, although Sinestro’s magical ranged attacks do seem to be a mite bit powerful. Also, Cyborg and Hawkgirl seem a little underpowered. That said, the characters are generally well balanced which is impressive for a game like this in the first week of its release. The real problems with Injustice’s online mode stem from NetherRealm’s servers and performance issues. Lag and a stuttering frame rate is common place and this really kills any kind of competitive online gaming – screwing up your combos, dodges and blocks.

Injustice: Gods Among Us is a good, fun, and brutal beat ’em up. It might not speak to the group of hard-core, competitive gamers out there – but this should not detract from a generally solid game.

– Lag is common during online play