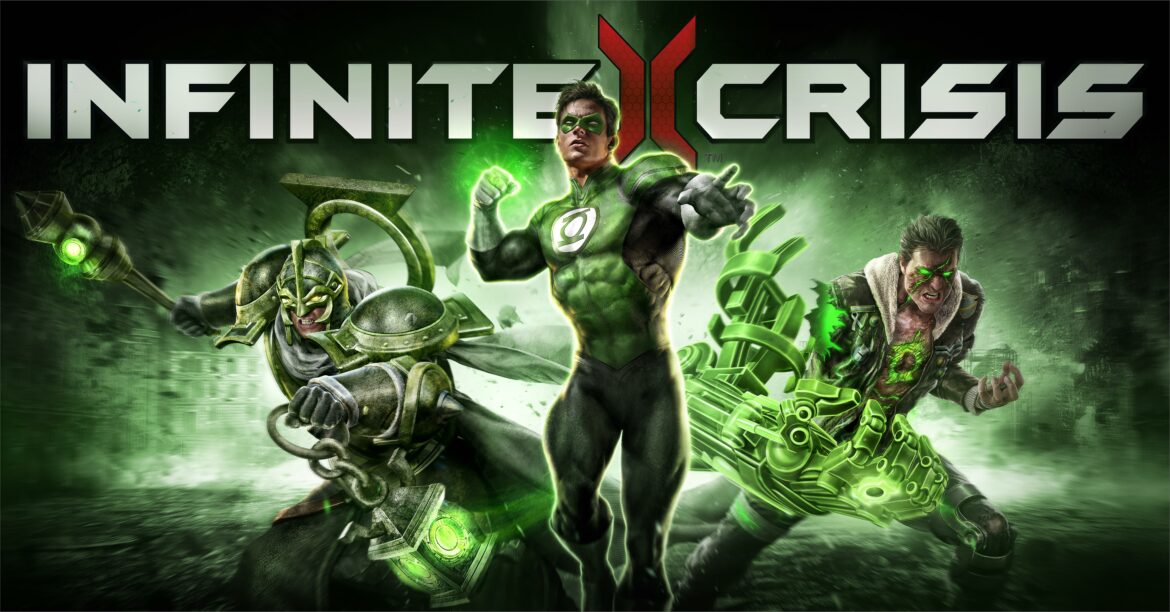 If you like comics and MOBAs (Mobile Online Battle Arenas) then you might have heard about DC comics newest game Infinite Crisis. It takes the typical MOBA formula and slaps a super hero inspired coat of paint. You get to take control of your favorite DC super heroes and villains as they battle it out for control of the city. Infinite Crisis’ access to popular comic characters gives it a chance to set itself apart from the typical sword and magic MOBAs that clutter the genre.

A Typical MOBA plays in a pretty specific way. Each team of heroes has a base that they have to protect from destruction. Between the two bases runs three lanes dotted with defensive towers down which minions will periodically march in an attempt to destroy the enemy. In between all of the lanes are jungle areas filled with neutral monsters whose only purpose is to be slaughtered for gold, experience, and buffs. As the heroes slay minions, monsters, each other, and towers, they will accrue more power in the from of items and experience. First bast to be blown to pieces loses the game. This is a formula you see in just about every MOBA that is out there today.

Infinite Crisis has decided to cast off the three lane design in favor of two lanes and a doomsday device. This is a game about super heroes and villains after all, so a doomsday device seems mighty fitting. There are also three control pads around the map that can be controlled in order to spawn more powerful minions for your side. If you have ever played the Twisted Treeline map of League of Legends then you have a clear idea of how the pads work. The Doomsday device is guarded by a meanest creature In the jungle, which must be slain in order to gain access to the device. 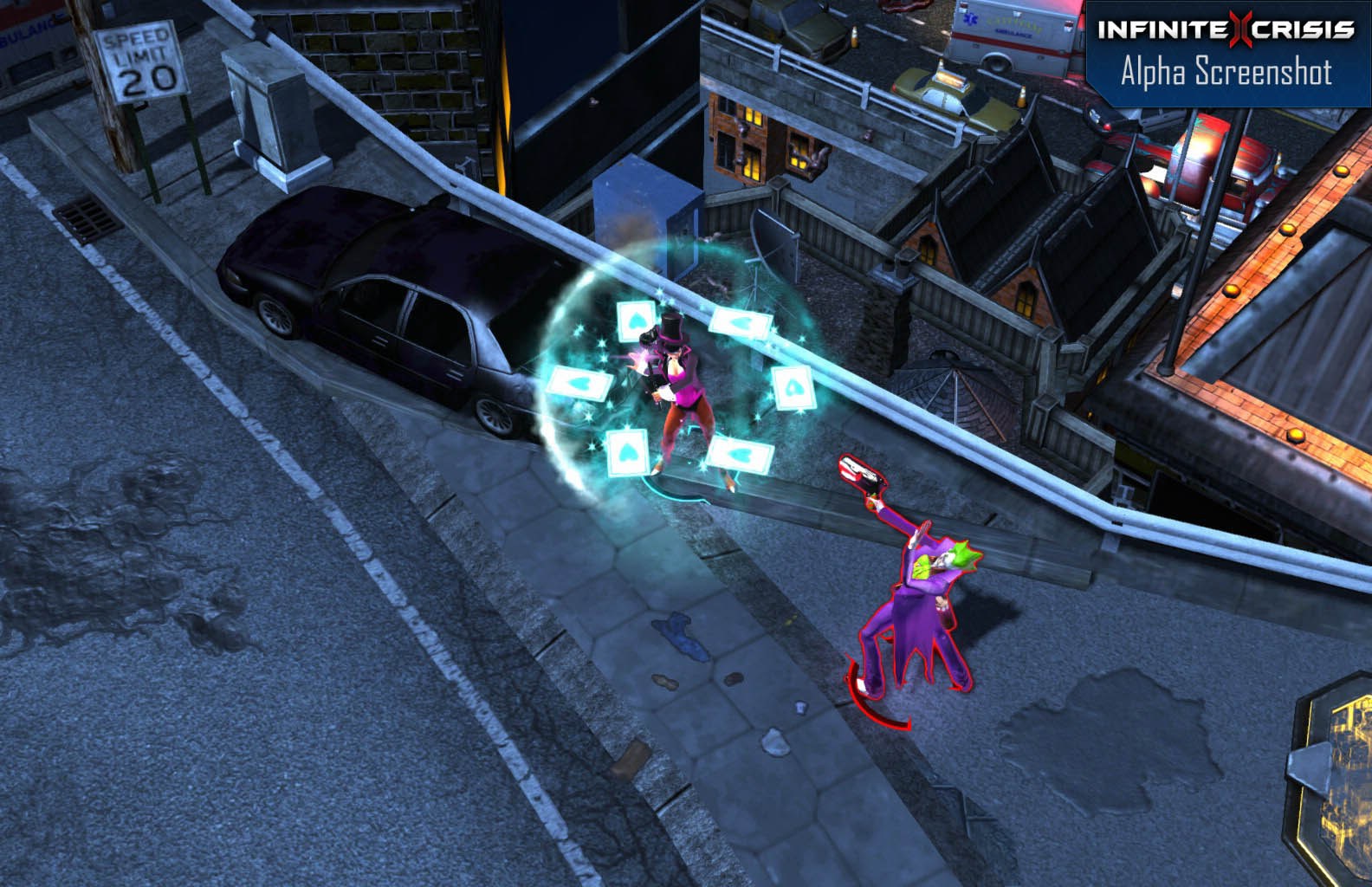 For some reason all of the pads and the doomsday device entrance are nearest to the top lane. When playing in the bottom lane you feel almost isolated from the objectives in the jungle. The two lanes plus jungle does encourage a balance team split of two top, two bot, and one guy in the jungle, but the limited access to objective from the bot lane leaves you feeling like you should be focusing power up top. I think the decision to go down to two lanes is nice because it opens up a huge jungle, and it doesn’t actually feel strange to have no mid lane.

Now that we have the whole boring gameplay overview out of the way, let’s talk super heroes (and villains). There are a number of DC Comics’ most famous characters on offer to play as in the game. So far the ones that you can utilize are:

As you look over that list some questions might pop into your head. Things like, “Where’s Superman?” and “Why are there four Batmans (Batmen?) and a Gaslight Catwoman but no normal Catwoman?” Well Superman has been announced as a playable character for the game, he just hasn’t made it into to it quite yet. This does feel very strange considering there are 3 Batman variations and his nemesis Doomsday is in it. These variations on Batman and others or NOT just skins, they are entirely different heroes. I honestly question the decision to put in variations on heroes without even covering all the bases on well known DC characters like Superman, Martian Manhunter, Lex Luthor, and Green Arrow.

Each character comes with a passive ability, 3 normal abilities, an ultimate, and two “stolen powers.” If you have played League of Legends then it’s easiest to just imagine stolen powers as summoner spells. They can be selected at the beginning of the match, but unlike summoner spells they have a unique twist depending on the hero. Everyone can call down a meteor, but if Green Lantern has the power then his does more damage. The Flash’s super speed is even more speedy than everyone else with the power. This is a cool idea, but it makes you feel like you kind of have to take the power that’s custom for the hero. 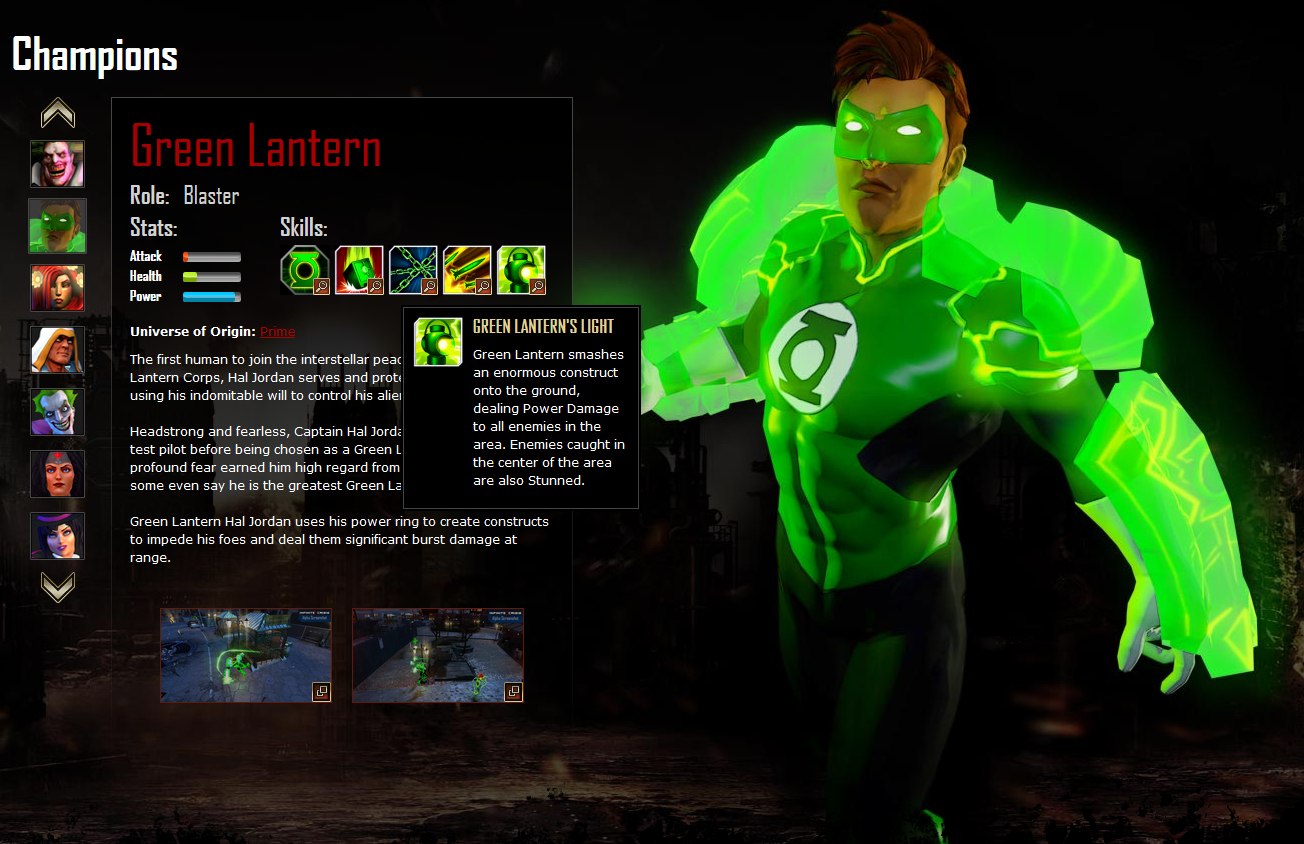 As you level up you can not only level up your normal abilities and your ultimate, but your passive gets levels as well. This makes prioritizing your abilities a little bit deep than in other games. Some people have pretty powerful passives that may be worth investing points into over an activated ability. As you collect gold you can buy artifacts, which are the exact same thing as items in any other MOBA. You buy the item, with more money you can upgrade it a few times. There isn’t anything special going on with the item system in Infinite Crisis.

Each of the character in the game feel as if they were inspired directly by their comics counterparts. There doesn’t seem to be any weird changes that don’t fit with any of the characters. Of course when you take people who are essentially gods and try to balance them out, some things get wonky. For instance Shazam is all magic and toughness, he lacks the physical punch to really be a brawler. It makes sense for game balance, but imagining Shazam as a physically weak character in a comic is sort of hilarious. As I played through the characters I really felt as though they tried to capture the essence of the character as best they could. There do seem to be a few balance issues between the heroes as it stands. Of course in MOBAs there are always balance issues, let alone for one in beta. It is frustrating though to enter a game knowing that if there is a Flash on one team, he is probably going to do awesome. In fact the only time I’ve seen a Flash not do great is when there is an opposing Flash doing great instead. While I didn’t ever feel that any champion was crazy over powered, some did seem better in general.

The doomsday device located in the center of the map is a hotly contested location during every game. When the device is locked down by a team destroying its guardian it will begin a countdown. At the end of the countdown mayhem is unleashed as the map is permanently altered with new routes and the enemy structures take significant damage. This adds a fun new dynamic to the game that almost always leads to devastating teams fights as each side struggles to claim its power. 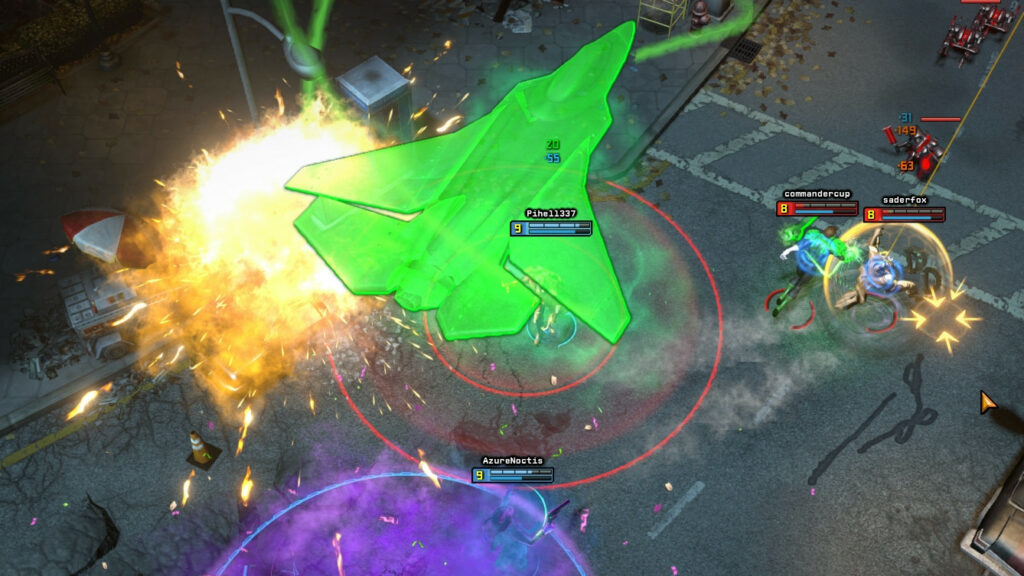 The visuals of Infinite Crisis are done very well, evoking comic images of super powers. Lightning crackles, batarangs fly, and green lantern missiles explode in a brightly colored comic violence experience. The environment is a beat up cityscape and the robots hanging about the jungle stand out nicely. The character models look like they could have been ripped straight off the pages of a comic. I’m glad to see that they did so well with the visuals of the game, they are even more important to a game based on comics.

My only real gripe with the gameplay comes in the form of ability range indicators. Unlike most MOBAs there isn’t a cone or line or anything to indicate the shape and range of your abilities. When you mouse over the ability icon you can see the general range from your character it can reach, but that is hardly useful during a fight. Plus if you have a cone shaped ability or something it is too easy to be unaware of whether someone is actually reachable with it, especially when trying to target multiple characters.

If you like DC comics and you like MOBAs then you should definitely go try out Infinite Crisis. It is currently in open beta so anyone can sign up and give it a try. It certainly has flaws right now, but hopefully those will all be ironed out before the game is actually released.