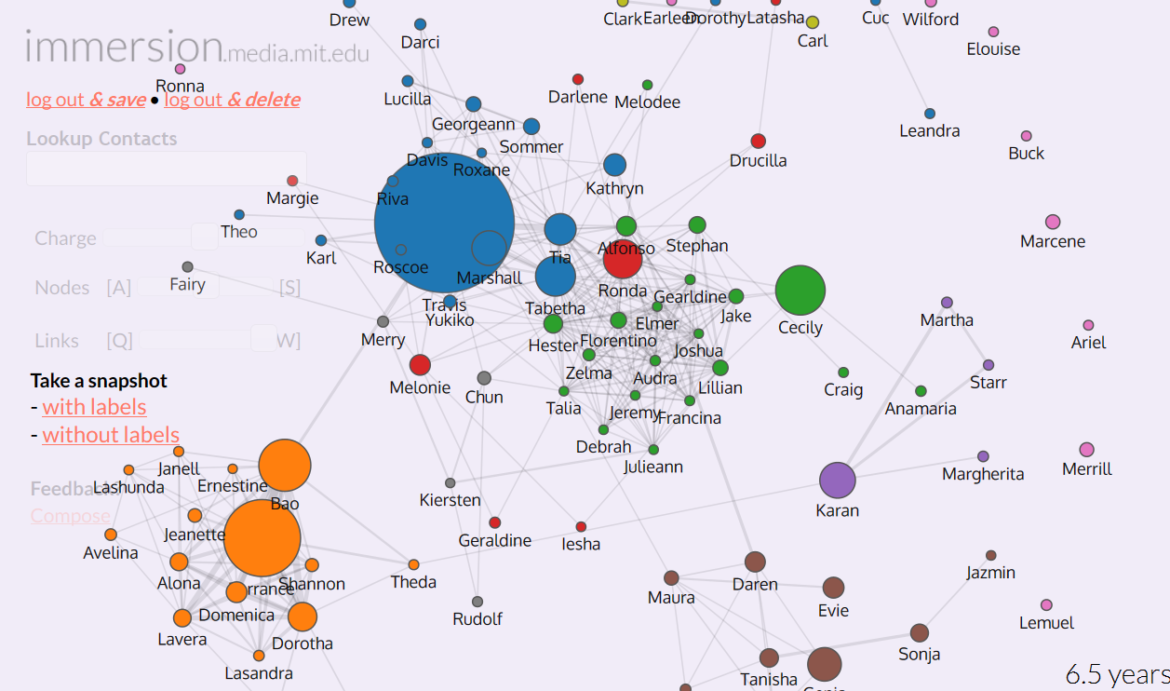 Remember in the ‘L Word’ where they had that map of their connections?

Okay, did you see/read ‘Coraline’? You know how the evil ‘Other Mother’ was all spidery and had a web?

Sigh. Alright, well….Just….Just think of what a baby would look like, if it’s father was 6 Degrees of Kevin Bacon and it’s mother was a spider’s web. 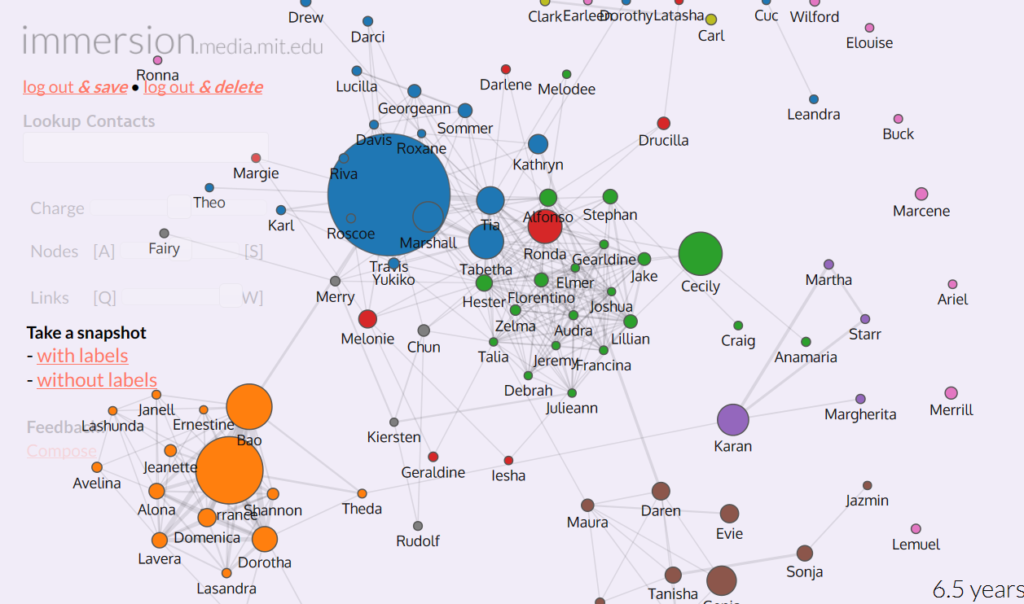 That’s kind of what Immersion is. But it’s an evil web of the people that you’ve exchanged emails with (either To, From or CC’d). You just have to log in with your Gmail account, which is not creepy at all.

Once you’ve let it access your contacts, because let’s face it the NSA probably has so don’t get all precious about it, you can see how those important people fit in your life.

If you’re one of those foil hat wearing conspiracy theorists that occassionally types in random things into their Google search, just to throw ‘the man’ off your real intentions….Firstly, hello Comrade! Secondly, you can choose to look at the ‘Demo’ option of the Immersion software. But be warned, after having a look, it’s mighty tempting to throw caution into the evil spider’s web.

Whether it’s your email history, or their demo (I got Tony Stark first time! Booyah!) you can begin to probe the visualisation of your life in email correspondence. You fiddle around the with the time lines and various other bits to see how one person is linked with another, how many times you’ve emailed them. At one point, the evil web of email contacts even told me about how one person had introduced me to another person!

You can save a snapshot of it, or discard it (yeah, sure ‘discard’. I don’t believe you).
As with all evil things, it’s very clever and engaging.

And I can see this being used by the mildly curious, to anyone who gets feriousiouly excited about the words ‘meta data’ (and don’t we all?).  They do say you should view it as a form of ‘art’. Well, the best kind of art that exists, is fan art.

By the end of the week…. I’d like to see a Song of Ice and Fire version of this because what is new and exciting technology for? Than to be clever about things that happen in Westeros?

Example-
Eddard Stark’s gmail address showing he was introduced to Robert Baratheon by Jon Arryn.
Or even more controversial, show Robert Baratheon linked with Lyanna Stark, who in turn had links with Rhaegar Targaryen and Howland Reed. You know, from when they all hung out together at Harrenhall.
(And if you think that didn’t happen, then you need to read the books because you can’t fit an entire universe into a television show. Happened at a Tourney, the way all things should happen.)

Oh, and the men on The Wall! From the Targaryen maester to father of the Mormont who now serves Daenarys…..This may be the only way for us to get a proper visualisation of the events within the SOIAF universe. You know, other than….the actual television series that visualises things for us….. But they leave stuff out. We can keep all of the stuff. All of the connections.

All of it.
And we don’t have to stop there, there are so many different things we can use this technology to make fan art with…..

Dudes, dudettes, boo-boo, we need to make this happen.

Why Haven’t You Seen It? -Samurai 7