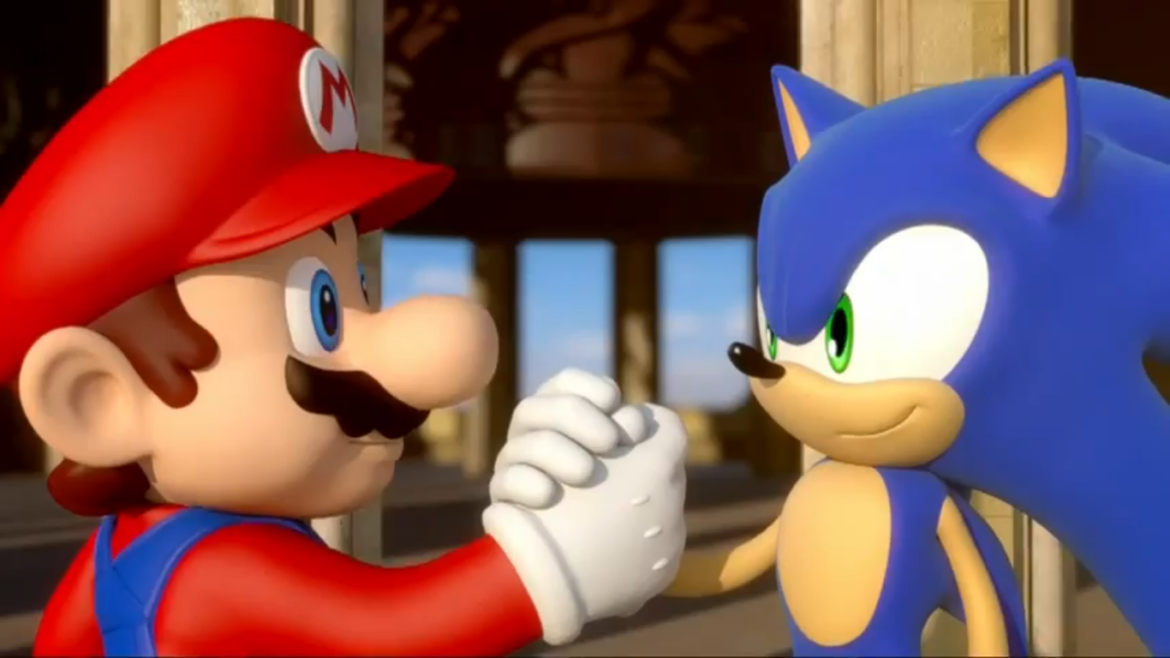 Okay okay okay. So technically the Olympic Games series is considered a “real crossover” between the two gaming giants, BUT I’M TALKING ABOUT SOMETHIN’ ELSE! I don’t know, I’m sorta sick of the constantly rehashed Olympic Games franchise. Seriously though. We’ve seen both the summer Olympics and now the winter Olympic twice now. Sure, the upcoming Wii U one might be a little different with the gamepad and everything but I’m honestly getting a little sick of it. Aren’t you? I mean, these titans are both platforming legends SO WHY IS THERE NOT A PLATFORMING CROSSOVER?!?!!?!

Now, before I get ahead of myself, its safe to say that Mario and Sonic games are very different from each other. Modern Mario platformer games are all about precision jumping and collecting stars and star coins. Sonic games (while there is a bit to collect) are all about momentum and bursting through a level as quickly as possible. As I said, they’re different. So why not have that difference in a platforming crossover? Honestly, I think it would be just awesome to see Green Hill Zone re-imagined in the manner that Mario would be able to traverse it Galaxy-style. I mean, look at that trademark loop-de-loop! That screams gravity-based game play. And what about Mario’s World 1-1? I think it would be neat to see Sonic run through there (but with the incredibly impressive new Sonic Lost World game play controls) and spin dash through Goombas and the sort. I don’t know if that would be exactly how the game would pan out, but I think it’s kind of a neat idea!

Mario’s platformers are pretty much perfect. I’ve never played a bad one. And that might be a lot to live up to seeing as though Sonic is just now starting to come out of his rut of terrible games. And it’s probably a safer idea to have the two in a minigame based series like they are now, but just dream with me for a bit, will ya?

I don’t think an idea like this is totally farfetched. A while ago, it was rumored that Retro Studios was in development of a Star Fox and Metroid crossover. I’m pretty sure the fan-base exploded after hearing that. I know I did. I’m still piecing myself back together from the thought. Sure, it was put to rest, but there were a ton of widely accepted ideas in place. Apparently, this game was to feature the best of both franchises in which Fox would play through Arwing missions as well as on foot missions similar to Star Fox Assault. Samus would then play from a first person point of view similar to the Metroid Prime series of games. You can check out more of that lovely mess here. I don’t know, that sounds a bit more out there then something as simple as Mario and Sonic.

So where are we in the process of ever seeing an idea like this come to light? Not very far. I’m anxious to see what exactly the 2014 Sochi Winter Olympics game has in store for us, but it looks a little lackluster. It seems like we’re getting the previous winter title, but adapted to the Wii U. That just seems lazy. Come on, Nintendo and Sega, you’re both so great! Why are you holding back? Do you think some sort of platforming crossover wouldn’t sell or something? Because you don’t even know how wrong you are.

I’d like to leave this concept with one last proposal of how a game like this could be approached. Since Nintendo absolutely LOVES the “New Super Mario Bros” line of games so much (since they keep remaking it), why not make the game similar to that? Throw in a little bit of Sonic 2 flair and BAM! I think that’s an alright idea. Just like in Sonic 2, you could have one player control Sonic and the other take care of Mario (like Tails). I don’t know, maybe even Super Mario Bros. 3 style where you alternate between the two?! Who knows.

While it certainly is a neat thought, I really doubt that we’ll ever see something like that. It’d definitely be a bold move on both companies’ parts, but I think it would make my inner child absolutely freak out.

League Of Legends Now Recognized As A Sport