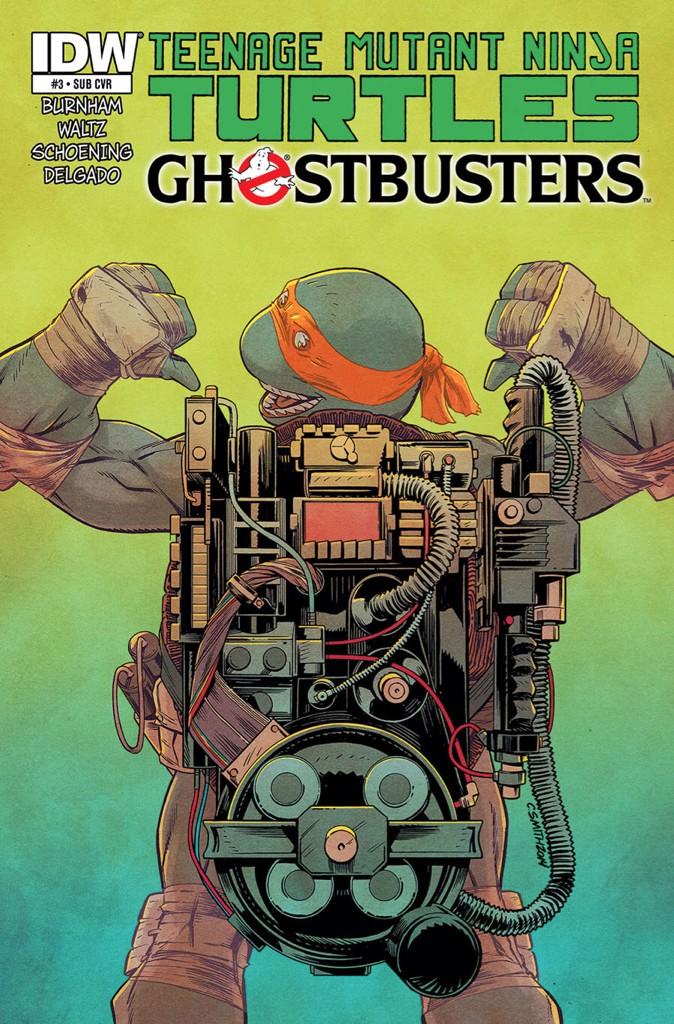 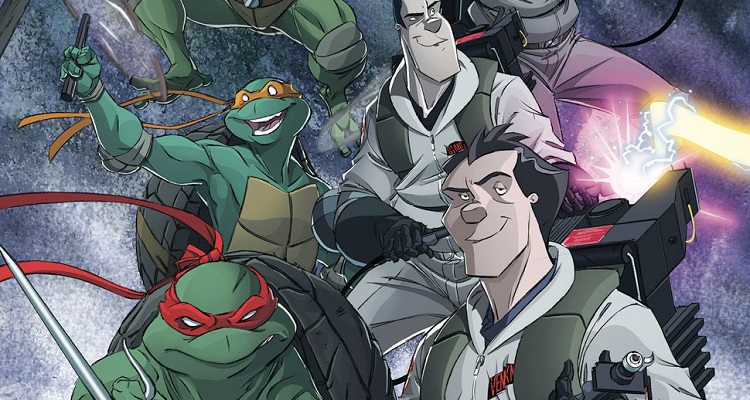 In case you missed it, IDW is doing some pretty incredible things with their continuing Ghostbusters comic book series. There are volumes of trade paperbacks out there now, tons of variant covers, and stories written in the spirit of the movies but freed from the containment grid. They currently have a new series that bridges IDW’s Ghostbusters with the Real Ghostbusters cartoon characters.

This is the second crossover between IDW’s Ghostbusters and a Saturday morning cartoon classic. The first being their 6-issue mini series that brings the Teenage Mutant Ninja Turtles into the Ghostbusters dimension, which makes for one radical team up.

I’m usually not a big fan of crossovers. Rarely do writers get the two worlds to mix properly, and what’s even rarer is for both comics to be represented well. What’s great about this series is that these titles are both written and drawn by Erik Burnham and Dan Shoening. They were able to employ Donatello’s love of science in a way that was not only able to bridge the teams and the world, but the story also presents an enemy that requires both the tech side of the Ghostbusters and the martial arts skills of the Turtles to defeat it.

You have an ancient, immortal Japanese demigod who is blasted into New York by Krang, around the same time the Turtles’ recently constructed teleporter malfunctions and sends them into the Ghostbusters’ alternate universe. Casey Jones gets possessed, and the demigod is out to enslave the world. The Turtles and the Ghostbusters have to team up to take out the demigod, save Casey Jones, and get the Turtles back to their dimension before their ability to teleport is lost forever. The story is fast-paced and action-packed, with a lot of great one liners from Venkman and Raph. You get Donatello donning a jump suit and busting ghosts mixed with Michelangelo, just happy to play with the Ecto 1’s siren and the Ghostbusters gadgets.

There are little-to-no major issues with the story. It does get a bit repetitive at times, when the Ghostbusters have to keep busting the same ghost, and the turtles have to keep taking out the possessed slaves of the ancient demigod, but the repetition doesn’t get boring. It just gives readers more opportunities to get lost in some cool GB/TMNT battle scenes. The writers also do a nice job of pairing the Turtles’ personalities with their Ghostbusters’ counterparts. Ray, Egon, and Don geek out over quantum physics and GB tech while they build a new interdimensional portal using the containment grid. Winston and Leo both relate to having to keep the groups focused on their tasks. Ralph and Venkman love poking fun at everyone, and Michelangelo is the only teenager who’s happy to be running around the firehouse looking at all the weird ghosts. April O’Neill’s part in the story is a bit weak, but I don’t think too many readers who are looking for TMNT/GB crossovers are going to care about that.

This is a fun story for kids and GB fans that has great action with vivid and crisp art, combined with memorable one liners and room for expansion. The series ends leaving things open for a sequel, and when it comes to another TMNT/GB crossover, I say COWABUNGA!

5 Awesome Games to Play With Your Family and Friends

5 Tips on How to Defeat the Early Morning Groan