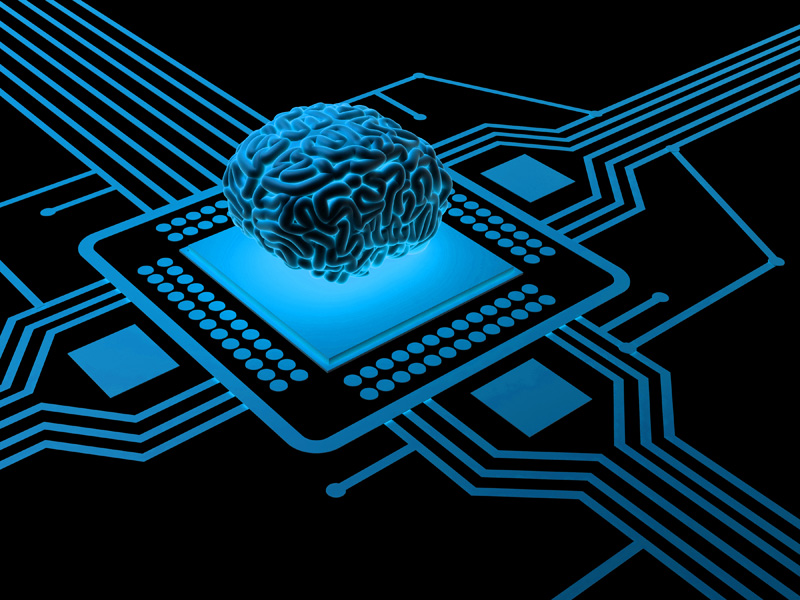 The human mind is an incredible piece of work. In the average human brain there are around 86 billion neurons and as many as 100 trillion synapses, or connections between neurons. This allows us to store and process a ton of data. Some estimates say that the human brain is able to hold more than 2 petabytes of data (that’s 2 million gigabytes) and perform more than 2 quadrillion operations per second. And it does all this on a mere 20 watts worth of energy.

That’s not even enough to run most light bulbs.

For comparison, an iPad only has 64 gigabytes worth of storage space, and can only run a mere 170 million operations per second.

Granted, there are supercomputers that can put the human mind to shame, but these have only been around for the last 4 years or so. Not only that, but modern supercomputers take up thousands of square feet and millions upon millions of watts.

IBM seeks to change all that with its latest chip, the TrueNorth, the latest SyNAPSE chip.

TrueNorth imitates the architecture of the brain, using an incredible 1 million different neurons, all connected in a network, much like synapses. There are 256 million of these connections, making 2096 of what IBM is calling ‘neurosynaptic cores.’ These cores, working in concert, are capable of an impressive 46 billion operations per second.

The most impressive part is that the whole chip, neurons, synapses, and all, only use a tenth of a watt of energy. IBM has plans to increase the number of synapses to one trillion, while using only 70 kilowatts of power.

This kind of power has been a long time in the making. When the company first published their results back in 2011, they were only capable of achieving 256 programmable neurons and 262,000 programmable synapses, all making up a single neurosynaptic core.

Of course, the implications for this technology are far reaching to say the least. IBM’s Dharmendra S. Modha has this to say about the possibilities:

“The architecture can solve a wide class of problems from vision, audition, and multi-sensory fusion, and has the potential to revolutionize the computer industry by integrating brain-like capability into devices where computation is constrained by power and speed.”

This sort of chip opens up whole new possibilities. Dr. Modha mentions things like self driving cars, real time video analysis, as well as computers capable of learning online and in real time. It could even do things like issue tsunami alerts or monitor oil spills.

Of course, the team at IBM also had to develop an entirely new architecture to run and interact with TrueNorth, as well. Using C++ on a TrueNorth chip is like using a hammer for a screw, Modha says. You might be able to do it, but it’s going to be a lot harder and the final results won’t be nearly as good. Instead, IBM is working overtime to write an entirely new programming language, complete with integrated programming environment, libraries, and even a teaching curriculum for programmers who want to program for the TrueNorth chip.

The most exciting thing about TrueNorth, however, is the fact that it might see its first commercial use in as little as two to three years. So five years from now, we could all be running around with brains in our phones instead of in our heads. But let’s be honest; that doesn’t sound too different from today.