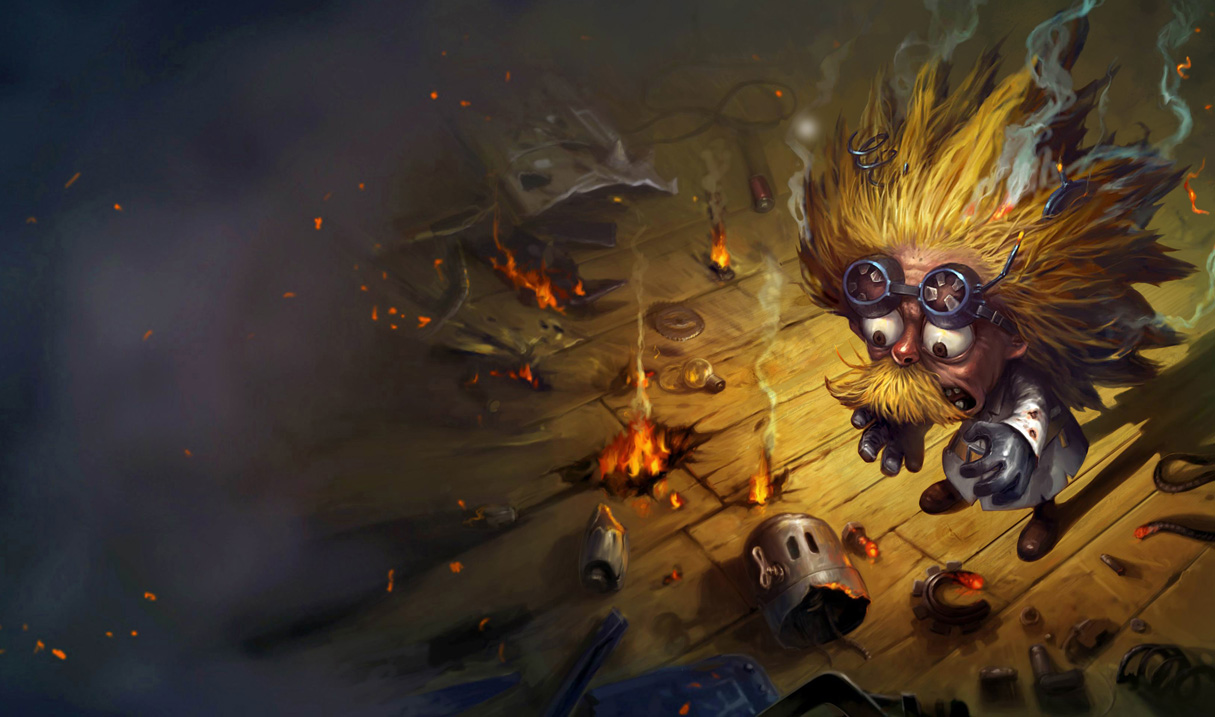 Xypherous sat down the other day, in order to give everyone an idea of what to expect from Heimerdinger’s upcoming rework. I don’t know about you, but I have been a huge fan of Heimerdinger as long as I’ve been playing League of Legends. The ability to set down turrets and just kind of hunker down has always been fun to me. Conversely, whenever I had to fight Heimer in a game, I’d squeel with glee every time I caught that son of a gun away from his…well guns.

So according to Xypherous, the new Heimer turrets come with an additional firing mode. It’s a long range laser that passes through minions, working as an auto poking tool. This sounds awesome to me! One of the things that always bugged me about Heimer, was that the turrets only mattered if people were dumb enough to get close to them. For the most part, they would just end up getting poked to death from a distance, and often never get a shot off against the opposing champ. Apparently the laser is going to be hitting for some hefty, ability power based damage, making it a must dodge for lane opponents.

Because of the new awesome laser to your face function the turrets have now, they’ve had to reduce the power of turrets overall. But, fear not! The gods of Riot have seen fit to return to us the sacred third turret that was once taken from us, to punish mortals for their minion blocking sins. With three turrets, and a sweet new laser, placement of turrets will be even more important than before. I look forward to watching my lane opponent dodge a laser, only to be blindsided by a second and third laser as a result.

A note that Xypherous made briefly, was that the turrets can now apply on hit effects. I’m sorry, what? How did that only warrant like half a mention? You’re telling me I can slap on a Rylai’s Crystal Scepter and a Liandry’s Torment and my turrets are going to proc all of that? Three turrets laying down 4% health damage and 35% slow? That’s insane! I wouldn’t be surprised if that change never made it out of PBE, or even on to PBE for that matter.

“One of the things we wanted to stress on Heimerdinger is that he has local control over his area. Because his turrets were still active while Heimerdinger was not nearby, it made his turrets powerful in a way that was neither appreciated nor particularly compelling to play against.”

That’s right folks, say goodbye to placing turrets to hold lane while you back for more items. No more hiding a random turret in other lanes in order to help give your ally an edge. Turrets now have a command range of 1200, if Heimer is out of that range for more than 3 seconds, the turrets will shut down. By shut down, I just mean disabled, they will come right back online when Heimer comes waddling back to lane. While this is kind of sad, it is also completely understandable. Nobody should be able to apply so much pressure without even being in the lane (Global Ults aside).

It is worth noting that, according to Xypherous, Heimer will be keeping his repair bots passive. I know some people were hoping he’d get a more exciting passive, but I don’t understand why personally. His health regen passive makes him a sick laner, as well as giving him the only ability in the game that can heal lane turrets. Why would we want to give that up? This does, however, run counter to the leaked Heimer rework document, that shows his new passive as,

Passive – Magnetic Salvage
* Remade: Every 4 nearby minion deaths, minions drop scrap. Scrap can be picked up to restore 25-65 mana and reduce his cool downs by one second.”

That’s sort of cool, like Zac’s passive meets Thresh’s passive and they have a mana based baby. Regardless, I’d be happy to have either passive on Heimer. But seriously, don’t take away my ability to regenerate towers…please?

“A portion of Heimerdinger’s ultimate has been devoted to shoring up a couple of his weaknesses – one of which being an inability to quickly set up when the time was required. One of the ways to use his ultimate can be to quickly set up a turret nest in a flash.”

Heimerdinger’s ultimate has been given a heck of a rework, that quite frankly sounds sick. When activated, his ult will cause his next standard ability to be extra effective when used, similar to Karma’s mantra, as well as free to use. Using his turret placement will not only grant you the frosty goodness it used to, but also allow you to instantly place three turrets. Apparently they’ve also left in the passive cooldown reduction (but not according to Xypherous). According to the leaked rework document, the specific effects of the ultimate are as follows:

Overall, I’d have to say that I’m stoked for the new Heimerdinger. Some people are crying that it’s a ninja nerf, but I don’t think that’s the case. Sure he’s not going to be exactly the same, but that’s okay because Heimer had a lot of issues. We don’t want him exactly the same, because exactly the same means exactly as wonky as before the rework. Plus, with his ult, he shoots 30 damn rockets into your face! 30! That is just awesome. I can’t wait to get my hands on the new Heimer, I bet it’ll be a lot of fun. Once it comes out we can all get on the forums to complain until we get a visual upgrade for him too.