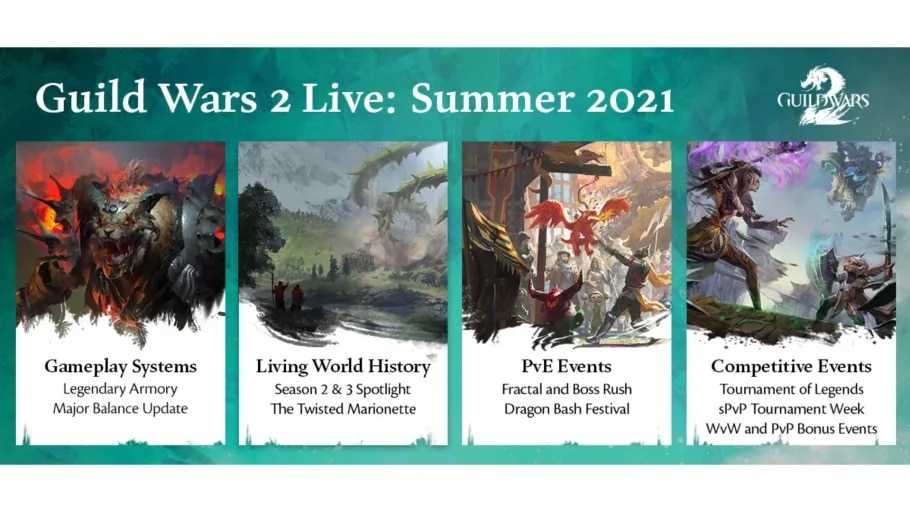 LONDON, UK – April 27, 2021 – Today developer ArenaNet invites everyone to save the date for July 27, when they will reveal the first details of Guild Wars 2’s next major expansion, End of Dragons, to the world. To punctuate the invite, the studio released three new pieces of concept art from the project to hint at the setting and new lands players will explore when it launches. The July 27 reveal will feature a live stream, new details on the setting and story, and more information on when players can participate in upcoming beta events for End of Dragons.

You can view the newly released concept art HERE.

In addition, the studio released a roadmap of content coming to Guild Wars 2 between now and then as The Icebrood Saga concludes today with the release of Episode 5 Chapter 4: Judgment. On May 11, Guild Wars 2 will be receiving a skills and balance update for the game’s professions and their elite specializations, changing the meta and bringing new considerations for character builds.

On May 25, players are invited to catch up on the game’s eight years of story content as past Living World episodes will be free for all players who log in during their promotional period. Episodes will be featured weekly in chronological order, and players who complete a brand new meta-achievement for playing through the content can unlock unique rewards, including a voucher for a Guild Wars 2: End of Dragons precursor weapon, the first step in crafting a third-generation legendary weapon when the expansion launches.

On July 13 a beloved boss returns to the game for the first time since 2014, when a rebalanced version of Living World Season One’s Twisted Marionette arrives as a limited time bonus event. A fan favorite encounter, the new boss event will feature some small updates to bring it closer to the most current design standards of Guild Wars 2.

Additionally, July 13 will also see the launch of the Legendary Armory, a one-stop storage feature for Guild Wars 2’s much-coveted legendary weapons. The Legendary Armory is a new and improved way to manage your legendary gear and upgrades. Once a legendary item is added to the armory, it will be available to every level 80 character on your account.

A cornucopia of weeklong experience bonuses for both PvE and PvP players, a Fractal Rush community event, and the return of the yearly Dragon Bash festival round out the exciting summer for Guild Wars 2. A full calendar of events can be found in the link above as the game marches forward to its next epic chapter, with more details to be shared on the summer content in the weeks ahead on the Guild Wars 2 blog.

About Guild Wars® 2
Guild Wars 2 is a visually stunning online game that offers players the epic grandeur of a massive role-playing environment combined with action combat, large-scale dynamic events that players tackle together, plus both team-based and World vs. World competitive battles. The game is updated frequently with Living World episodes that tell the ongoing story of the world and introduce new places to play in. Yet with all these updates, the game continues the no-subscription-fee business model that made the original Guild Wars so popular. For more details, please visit www.guildwars2.com

About ArenaNet
ArenaNet is the developer of the groundbreaking Guild Wars 2 and best-selling Guild Wars online roleplaying games. The studio’s mission is to create innovative online worlds, cultivate a vibrant and engaged global community of players, and to incorporate handcrafted artistry into every aspect of their games. ArenaNet formed in 2000 and it has attracted over 15 million players worldwide, with press and fans consistently calling Guild Wars 2 one of the best MMOs and RPGs of all time.