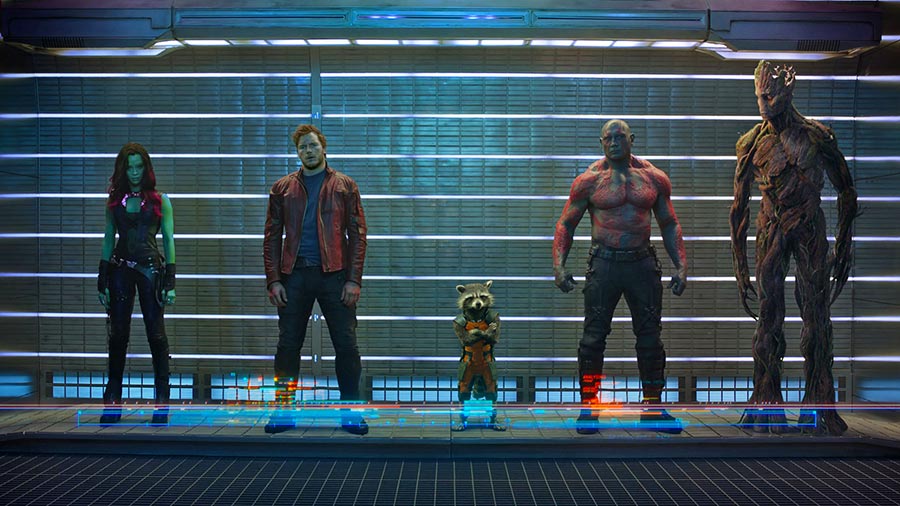 Earlier this month, the first official cast photos for Marvel’s upcoming summer action film Guardians of the Galaxy were released. The promotional pictures were of the movie’s titular guardians: a team of five mismatched warriors from across the Universe upon whose shoulders the fate of Earth (and more) may rest. A synopsis of the upcoming film was also released.

An action-packed epic space adventure, Marvel’s Guardians Of The Galaxy expands the Marvel Cinematic Universe into the cosmos, where brash adventurer Peter Quill finds himself the object of an unrelenting bounty hunt after stealing a mysterious orb coveted by Ronan, a powerful villain with ambitions that threaten the universe. To evade the ever-persistent Ronan, Quill is forced into an uneasy truce with a quartet of disparate misfits — Rocket, a gun-toting raccoon, Groot, a tree-like humanoid, the deadly and enigmatic Gamora and the revenge-driven Drax the Destroyer. But when Peter discovers the true power of the orb and the menace it poses to the cosmos, he must do his best to rally his ragtag rivals for a last, desperate stand — with the galaxy’s fate in the balance.

Guardians‘ Role in the MCU

But that doesn’t clear much up for fans who aren’t familiar with the Guardians, does it? And, for a Marvel title, Guardians of the Galaxy hasn’t exactly been a household name. After the announcement of the new wave of films in the Marvel Cinematic Universe (i.e. Earth-199999) in 2012, some fans were confused at how exactly Guardians of the Galaxy would fit in to the existing movie canon. After all, all of the other second-wave films (Iron Man 3, Thor 2, Captain America: The Winter Soldier, Avengers: Age of Ultron– even Ant-Man) have their roots in the long-standing Avengers comics, which have been being published since 1963. So how does a relatively new comic series fit in with one of the backbones of the Marvel franchise?

Though Guardians of the Galaxy had a run based in 1969, the team we’ll be seeing in theaters August 1st is based on the more modern run of the comic that began publication in 2008, and is therefore considerably newer than the big names in The Avengers. Still, taking a look at their short run and previous appearances can give more casual fans a better idea of who the Guardians are, and what their role in the MCU will be.

Who’s Who on the Guardians

The cast list released for Guardians of the Galaxy‘s August release has been as informative as it has been star-studded. The main character, Peter Quill (aka Star-Lord, Earth native turned intergalactic policeman) will be played by Chris Pratt (Parks and Recreation). His teammates will consist of Gamora, deadliest woman in the galaxy (Zoe Saldana); Rocket Raccoon, a genetically modified raccoon and expert marksman (voiced by Bradley Cooper); Groot, a tree-like extraterrestrial fond of human experiments (Vin Diesel); Drax the Destroyer, a reanimated superhuman on a mission of vengeance (Dave Bautista); and Rhomann Day, commander of an intergalactic police force known as the Nova Corps (played by John C. Riley).

Quill, the main character and leader of the Guardians, was raised on Earth by his mother, Meredith, and an absent father who was, unknown to Peter, an alien. After his mother is killed by aliens who  were seeking to end his father’s bloodline, Quill becomes an orphan, and eventually a NASA astronaut stationed on a space station. Cocky and petulant, he eventually tricks his way into becoming Star-Lord and part of the Nova Corps in replacement to one of his comrades. In the comics, he creates the Guardians in the aftermath of a war between the Kree and Phalanx, two recurring alien species in the Marvel universe.

How Guardians and The Avengers Fit

So how does it all fit? Though Marvel is staying hush-hush on the actual plot of its upcoming films (with good reason), possible clues to how the films will tie together can be seen in the stingers of The Avengers and Thor 2, as well as in the title of their upcoming films Ant-Man and Avengers: Age of Ultron.

How? Well, remember this guy from The Avengers‘ stinger? 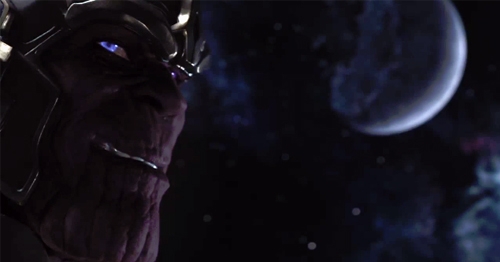 “To challenge [humans] is to court death.”

He was the one who lent Loki the Chitauri to invade Earth in return for the Tessaract. His name is Thanos and in the comics, besides being a bad dude who’s been referred to as “a threat to all life,” he’s also Gamora’s adoptive father (before she realized he was bad news), as well as the one responsible for Drax’s death and the focus of his drive for revenge. He has been confirmed as a kind of “mastermind” behind the events of the upcoming movie, though the actual events of course remain unspoiled.

The Collector, to whom Volstagg and Sif entrust the Aether in the stinger of Thor 2, also has a tie to Thanos in the comics, as he began his collection of culture and species across the universe as a sort of ark should Thanos wipe it all out. (He has precognition.) He also had within his collection one of the six Infinity Stones, all of which were needed to power Thanos’ omnipotent weapon the Infinity Gauntlet, which fans have pointed out is seen in Thor in the vault where the Tessaract was kept, and may be Thanos’ ultimate goal in the MCU.

As for Ant-Man and Age of Ultron? Ultron is an artificial intelligence robot originally created by Hank Pym, aka Ant-Man. And the Phalanx mentioned earlier? The ones that invaded the Kree (who, by the way, are at war in the comics with a pseudo-parallel version of the Chitauri called the Skrulls)? Ultron becomes their leader.

Though the Marvel Cinematic Universe isn’t parallel to one Marvel like or another, it does take influence from it, and these points of intersect in the comic may lead to future intersections in the MCU as well.

What do you think lies in store for Guardians of the Galaxy? Share your theories with us in the comments!

House of Cards Season Two: Welcome Back to the Madness

Comic Review: The Rat Queens #4 – Perfection On A Sword