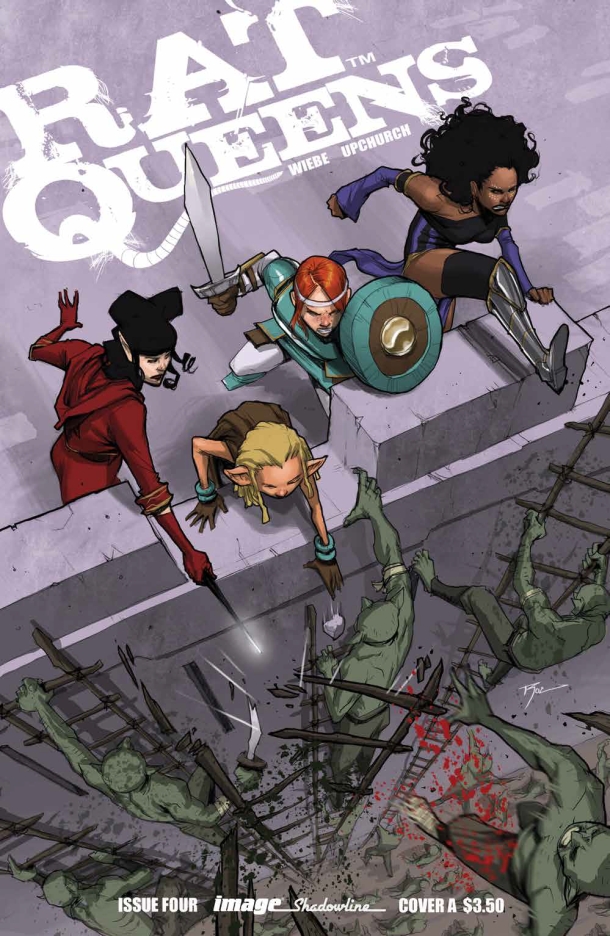 Oh my glob! And your glob! And all the globs in all the Universes! 2014 is going to be a good year. You know how I know? Because the latest Rat Queens is like if Warhammer and Tank Girl were stitched together in the laboratory of a mad professor somewhere! Which is not unlike that Tank Girl issue where that mad professor stitches together some body parts. You know the one, it’s a bit horrifying.

I’ve been nervous, before now, in drawing any serious comparisons between Tank Girl and The Rat Queens. Tank Girl is iconic, she is one of a kind, she is the epitome of the Undistressed Damsel. Plenty of comics and characters can share similarities with Tank Girl, but so few can actually harness that same flavour. There’s no doubt plenty have tried, with varying degrees of gore, sweat and swearing. But none have really been able to capture the anarchistic spark that existed in Tank Girl, until now. That’s not to say it’s a copy of Tank Girl. But what Wiebe and Upchurch have done, is tap into whatever energy was flowing through Tank Girl all those years ago and use it to make one hell of a comic series.

Issue 4 of The Rat Queens is full on.

There are swords going into things you didn’t think they’d be going into and the swearing is heavier than the large rocks that are falling out of the sky, threatening to splat the people of Palisade. If you are easily blinded by rage when someone uses certain swear words, no matter the context or artistic merit, then perhaps now is the time to back slowly away from The Rat Queens. What stops Issue 4 from just being a festering bath of stinky words and over the top gore, is how well structured the violence and swearing is.

If you don’t like a lot of swearing, or find certain things inappropriate, but you love The Rat Queens because you have awesome taste in comic books, then this is a good issue to challenge yourself on. Maybe it was written with Wiebe and Upchurch snickering like school boys at how they were getting away with writing all the dirty words. Or maybe they thought about it. I like to think it’s a bit of both. The placement of words, not just on the page but where they appear and who says them, is genius. The expressions and actions of the artwork fits in perfectly.

(At this point, I would LOVE to show you more of what’s in store in Issue 4 of The Rat Queens. But that would be spoiling the whole thing for you. I don’t want to do that. Even if we do disagree about Star Trek: Enterprise)

From the very beginning, The Rat Queens has been an exercise in perfect mixtures. From the world, to the Queens themselves, to the men who’ve created it. Kurtis J.Wiebe and Roc Upchurch are probably my favourite team to work together on a comic series. They match one another perfectly. Issue 4 is just another example of why these men can NEVER stop making comics together.

Issue 4 of The Rat Queens is not only off the chain, it has harnessed the power of the chain and is whipping mediocrity in comics into submission.

Unless your name is Gary because no one likes you. You know why, Gary.

But for this issue, I would put it on the Iron Throne and fight the King In The North and all of the Targaryen/Dothraki/Unsullied and Others. As we’re not in Westeros (yet, I’m working on it though) this is the next best thing-

Because no one likes you, Gary.