Unless you’ve been living under a rock at the bottom of the Mariana Trench, practicing how long you can close your eyes and cover your ears, or if there is the slim chance that you are my parents, you know that Grand Theft Auto Five was released a few weeks ago.

I personally am aware of this, having chosen now to start working in a video game shop. As such I have been ringing copies through my cash register like hot cakes (if the hot cakes came with GTA V buried beneath the icing).

With all the fanfare and hullabaloo accompanying a game that cost more to make than almost any major motion film to date, it’s probably time we dipped back into that age old debate of violence in video games, because everybody else is going to anyway.

Having made back its money in pre-orders alone, and selling hundreds of thousands of copies by the week, there’s a distinct possibility that there are a lot of minors playing this game (statistically, some miners as well), along with all the age-appropriate adults/man-children (like myself) who also purchased it.

In a game that contains nothing but deviant activities, along with a drawn-out torture scene, should we be worried by this idea? UK newspaper and proud stain-on-the-face-of-proper-journalism The Daily Mail was on hand to give its two cents:

Yes, the potential exists in any given Grand Theft Auto to murder a prostitute and rob her of all her worldly possessions, but it’s important to remember that it’s possible to murder literally anyone else in that game as well.

But why are we so hung up about the safety and good health of video game prostitutes, when in real life the awful reality and actual violence that sex workers face is either ignored or relegated to a smaller part of a newspaper?

Why suddenly the conscience over their sprite-based compatriots? And why on earth are we looking to the Daily Mail to guide our collective moral compass; lest we forget this is a paper that barrages its online readers with weird candid photos of Suri Cruise, who is SEVEN, saying she’s “all grown up now” and similar things. It’s creepy. 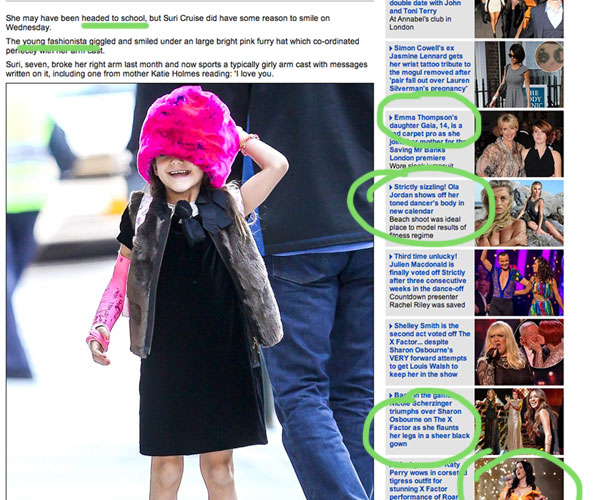 Pictured: The bellweather of all morality, hard at work.

Video game sex worker murder is all well and good, but what about the violence and adult themes that the day-to-day GTA V player will experience? It might not look particularly pretty to an observer, but I’m absolutely convinced that its not a leading cause of violent tendencies amongst people. A lot of accusations imply that GTA V is somehow “training” or a “fantasy” for people who dream about acting out some visceral damage on fellow humans; but if anything it’s escapism, and a harmless one at that.

To make my point, I turn to a point that Ricky Gervais once made. In one show, Gervais was defending the premise of dark comedy (or “offensive comedy”, if such a term exists), and in many ways his idea applies to the themes and images of a game like GTA V:

The thing about sick jokes [is] when we tell a sick joke, it’s with the express understanding that neither party is really like that. I wouldn’t tell a sick joke to a known pedophile; I wouldn’t go, “Hey mate, you’re gonna f*cking love this one more than anyone, son” […]

To put it simply: we don’t do these things in GTA because we believe they are actually great, and likewise the developers are not showing us these images because they believe that murder is awesome, and that all the players are potential murderers just chomping at the bit to have a violent turn with a baseball bat. Rather it is the implicit agreement between Rockstar and us that the things we are watching are wrong, no matter how much fun we all have while “doing” them. It’s knowingly deviant and controversial, acting out in a very self-aware way, because it knows it can. And that sells, just look at Miley Cyrus.

I imagine it’s hard to appreciate what I just said if you are a concerned parent, watching from the doorway as your young one gleefully mows down a shopping mall full of people before going and trying on new hats at said mall (of course, the onus is on you as a responsible adult to either restrict access to these things or to discuss the issues you have with it.).

But with your worry, you need to understand something I’ve come to realize during my time gaming (I say “I” because I’m not sure it’s a universal sentiment). When you play a game for long enough, you move beyond what is actually happening on the screen; rather it becomes a slot machine mentality, a button-pushing exercise in completing tasks.

When you kill a bunch of people, or blow up a car, it’s because you want to succeed at the game and progress onwards, rather than wanting to do the actions themselves. You want to be rewarded, and in a Pavlovian way you march towards goals, end points and checkpoints, without much regard for the actual practicalities of what you are doing. It’s not about killing, or robbing, or whatever it is you happen to be doing, its not even dehumanizing the violence depicted on the screen. It’s about beating a system in the same way as gambling or sport is.

It’s the same reason that typically “concerned” adults who actually sit down to play video games, like the Skyrim Mom, get so involved and have such a good time. They realize they are playing a game, and trying to win by its rules, rather than being a deviant getting off on some murder simulator. It’s a classic insider/outsider problem; a pure observer will never be able to appreciate the sort of stimulation that a video game brings with it.

So, in conclusion, don’t be worried about the level of violence and murder (even of prostitutes) that exists within each copy of GTA V, it’s harmless, and by and large completely meaningless. Instead, you should probably worry about the misogynistic tone, the sexism, and the portions of lazy writing.

In the same way with comic books, movies, television, and rap music in the decades before them, video games are getting their turn as the next scapegoat to be run through the mill.