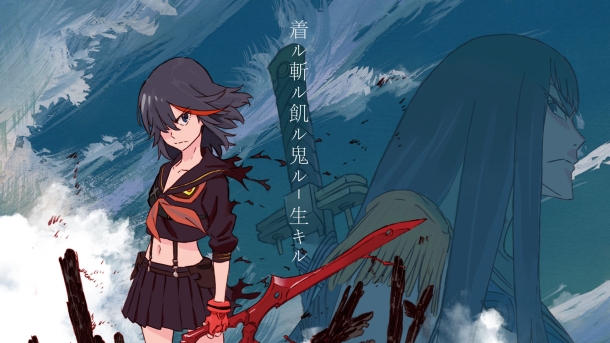 Fan service, running with scissors, clothes that give you super powers, all with a touch of Battle Royale (like Hunger Games, but….without Jennifer Lawrence and a few other changes) that’s what Kill La Kill is.

An offering from Trigger studios, Kill La Kill is an anime set in post-apocalyptic Japan, centering around the Honnōji Academy. The academy is under the iron rule of the Student Council, a group of students who wear special Goku uniforms that imbue them with special powers. Satsuki Kiryūin leads the council and for a bad girl, she’s really bad. But in the good way. Everything is going according to plan at the Honnōji Academy: people being strung up for their crimes, the majority of the student body paralyzed with fear by the Student Council, the faculty utterly powerless. Then, a new student arrives carrying a rebellious attitude and half of a pair of big scissors.

Let’s get the issue of fan service out of the way first. For those who don’t know, fan service is a term that really just means ‘servicing the fan’ in manga and anime. The service can be any number of things (from long fight scenes to shots specifically to show off a mech) but it quite often refers to sexy stuff. Ever seen an anime where a girl falls over and is all “Oh, everyone can see my underwear!”? Fan service. It can be more blatant than that but you get the idea.

If you can overlook, or even enjoy, some fan service you should be okay with Kill La Kill. They’ve gone with the standard ‘little bits of cloth for armor’ approach with at least one of the girl’s outfits. Whether or not it will be over the top in the future, I can’t say. But I don’t get the feeling it will be nearly as bad as Queen’s Blade (a great series that might have been even better if they hadn’t seemed to pad each episode with shots of lady chests).

The animation is a strange mix. At times, the artwork is wild and messy. It’s as though the scene was moving too fast for the artist to draw it in a controlled way. In this sense, there’s a real “moving manga” feel to a lot of the fight scenes. In fact, Kill La Kill is also a manga so if you want a double dose of it, that’s available. The frantic style of the fast-paced scenes is beautifully contrasted though, with some of the establishing shots obviously being crafted very carefully.

It’s that same fast-paced action that makes watching it with sub-titles just a little difficult. There’s so much information that you want to take in and people are speaking so quickly (often over one another) that it’s easy to become exhausted from watching an episode. But that’s not necessarily a bad thing. It certainly gets the viewer into the feel of the series and once you connect to the energy, it becomes fun. I just wish there was a little more time to take in the scenery. I guess that means having to watch it again (Oh bother! How sad for me).

Is It Worth It?

For a first impression, this series is worth taking a look at. While there was one scene that was particularly creepy (you’ll know it when you see it), it seems fairly lady friendly. I mean, the two main power players are girls! It puts a nice spin on the Student Council that we’ve all seen in many an anime based in a high school. The special clothing aspects aren’t unique, but they’re going to add a lot of entertainment to the series.

So far, I wouldn’t suggest that you rush out and see it. But it’s recommendable and hopefully will grow into a series that you can’t live without. If you enjoy the anime enough, as I’ve said, there’s a manga as well. This is solid, but it’s not mind blowing (yet).