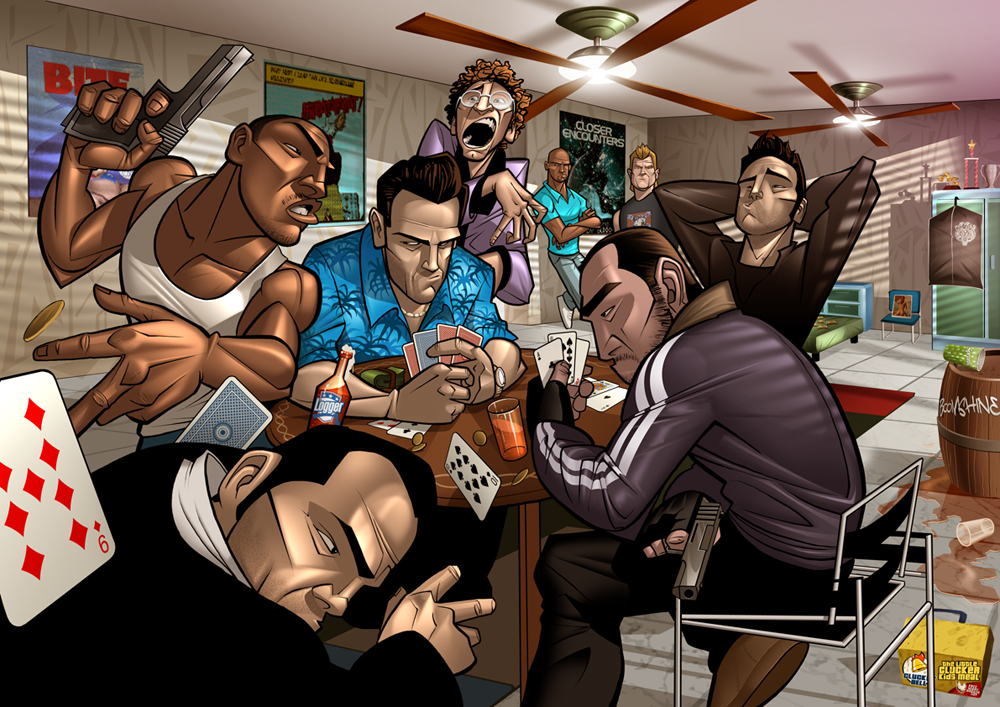 So GTA V is here. Did you not hear? I’m fairly sure aliens from the dark side of Mars are currently shooting gangsters and flying jet planes into prostitutes in the biggest instalment in one of the biggest videogame franchises in the history of the world. Michael Bay would baulk at the budget for GTA V, and jaws hit the floor as the sales figures rolled in – with the budget recouped on pre-orders alone.

But this is not some bunch of pretty kids signed up overnight with a smash hit first single and album marketed up to the eyeballs. Grand Theft Auto are the Queen of the gaming world – a band who took a few albums to get into their stride, before finally achieving their Bohemian Rhapsody at the 4th time of asking and from there only getting better and better (with the odd mis-step here and there). But it’s safe to say that they’ve earnt their place on gaming’s Mount Olympus. So today, I will chart their rise from lowly bunch of art-schoolers playing gigs in pubs, clubs and your shed to stadium-filling Goliaths who’s music has everyone singing when it comes on the jukebox in the pub, in true VH1 Storytellers fashion.

All the pre-hype around GTA V has been it’s huge maps, gorgeous scenery and endless scope for exploration. Compared to that, GTA 1’s maps have just about enough roads to fill a postage stamp. Or one Weetabix. And playing the game was like looking into your breakfast cereal bowl too, because the entire view was top-down birds-eye-view style. Great to get a different perspective on things, but not so useful when you keep crashing into cars because you can’t see more than about five metres in front of you. It’s like playing as one of the guards from Metal Gear Solid. It’s truly bizarre playing it now, with pedestrians reduced to several different-coloured blobs like squashed Lego figures, transforming into blood splatters when you hit them with your fast-moving rectangle with lights and windshields seemingly painted on. Bullets become Pong-style dots of death flying in all directions and buildings just look like dusty squares, like someone’s maths homework with some good pencil shading. Graphics therefore weren’t a strong point of the original GTA – in fact, if you wanted a nice city to drive fast cars around, the first Driver game in 1999 was probably a better bet.

In one of those classic stories, the game was originally called Race ‘n’ Chase, and came dangerously close to not being made at all. But what started in 1995 as a low-key street racing game eventually crept out in 1997 as a very high-profile corruptor of young minds and end of civilisation apocalypse. Because one thing that GTA grasped from a very young age is that wanton violence is mana from heaven for videogamers and Satan’s own spawn to parents, politicians and the media. The age-old argument about whether films inspire outbreaks of homicidal carnage in real life was about to turn up unannounced at the videogame house, and the creators (Take-Two and DMA Design) were well aware of how to spin such controversy to their advantage, intentionally hiring PR director Max Clifford to whip the press into a foaming ‘THINK OF THE CHILDREN!!!’ rage. And boy did it work. Like many great American things (mostly bands), GTA 1 was initially a success in the UK due to the reverse effect of the controversy generated; the more politicians screamed that it should be banned to protect the kids, the more the kids wanted to see what this controversial pile of death and guns was all about. As well as the death and carnage, GTA 1 introduced a few other features that would run consistent throughout the series. For one was the sandbox, non-linear nature that would almost completely revolutionise gaming from here on in. Why not do away with the ‘main menu, mission, menu, mission, minigame, menu, repeat ad nauseum’ pattern that most games had followed for years and leave it up to the player as to what they do and how they progress through the game? If you want to go and answer phones and cause death and destruction for random psychopaths on payphones, you can do that. Or you can stay where you are and start mowing down civil servants in the park. Then jump in a car and have an epic cop chase through the city with pumping songs on the radio, before jumping out and blasting a row of cops to death Matrix-style. Giving the player freedom to mess around in the game was very appealing and has been the core appeal of the GTA games from day one. Speaking of which, the radio stations full of darkly satirical and humorous interludes were present here, as well as the holy trinity of cities – Liberty City (not New York, honest), Vice City (not Miami at all), and San Andreas (which has NOTHING to do with California whatsoever) – which we’d get to know in much better detail later on.

DMA Design also introduced the novel concept of the ‘console expansion pack’ – a game that is basically the same game but re-skinned in nice new clothes. GTA London 1969 was the add-on game, and…take a wild guess where and when it was set. Yup, the American accents had become Cockney, the moving rectangles now had Union Jacks on them, and the dusty squares now looked vaguely like the Houses of Parliament and Big Ben. And while it was fun to hear people scream ‘cor blimey guv’nor’ as you mowed them down, it didn’t add much to the overall blueprint. The big step forward was with the full sequel, 1999’s GTA2.

Except it wasn’t much of a step forward. More of a shuffle. The graphics remained unchanged, the view was still top-down, and the aim of the game was to still commit genocide on every human being walking the streets on that particular day. The difficult second album had arrived, and the band decided to essentially stick rigidly to the formula that made the first record a success with the odd bit of extra polish applied here and there. And it wasn’t enough, despite a good execution. It was a better game than the first, but too similar at the same time, and not enough of a step forward. It felt like another expansion pack, a GTA Skynet 2020 add-on game in a generically ‘futuristic’ city with some admittedly good attention to detail in terms of locations, and I must say that the gang meters were a really good idea. Essentially they work on the common sense principle that if you do jobs for gang X which involves blowing up stuff belonging to gang Y, gang Y will get steadily more annoyed with you, until you start doing missions for them which involve blowing stuff up for Gang X, wherein gang Y will be more friendly with you. Yup, these gangs are fickle mistresses and the relationships are difficult to maintain, but you’ll have a lot of blood-soaked fun in the process.

As much as GTA2 was a very good game for it’s time, DMA Design (now renamed Rockstar Games) knew that they’d never get to the top of the music charts playing top-down 2D forever. The step to full 3D needed to happen, but was it even possible? No-one had ever modelled something as huge as an entire city in 3D before. First-person shooters just modelled glorified tunnels, flat bits of scenary claiming to disguise an entire city behind them. The Driver games had done a pretty handy job of modelling entire cities full of roads fit for driving and powersliding around, but a) neither had many pedestrians, b) the main character wasn’t able to do much. In Driver he was sealed for life in one car –  a bit problematic when you inevitably crash into a lamppost. In 2 he was allowed to at least get out, but his hands must’ve been shaped like Lego figure hands, because all he could do was get into other cars. Obviously holding a machine gun to mow down unarmed civilians was beyond his polygon-modelled abilities. If only there was a game that could bring together the original GTA’s senseless loss of life and whacky humour with Driver’s cinematic scope and open-ended 3D cityscapes…if only.

Then in 2001, Grand Theft Auto 3 came out. And everything changed…

Tune in tomorrow for part 2 of the retrospective, when the GTA circus went from small-time entertainers to the world’s biggest megastars, leaving a trail of controversy and dead hookers in it’s wake.