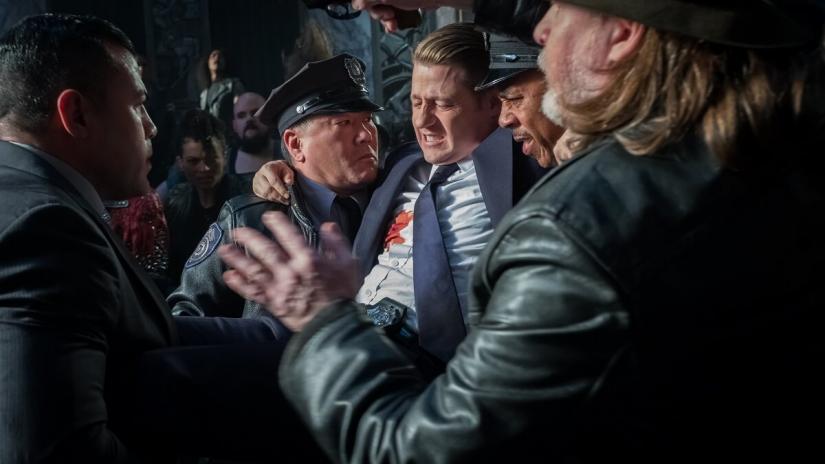 Gotham has never been known for its subtlety. So it’s no surprise that, with four episodes left in the series, Gotham just comes right out and addresses the question that’s been at the heart of the show’s run over the last four seasons: is Jim Gordon a good person? Or, more specifically, would the city of Gotham in general, and the people closest to Jim in particular, be better off if he were dead?

Don’t get me wrong—by Gotham standards, “The Trial of Jim Gordon” is a pretty solid hour of television. It’s not as action-packed or as crazy as we might have liked, but it at least feels like it makes some progress toward a sense of closure without taking us down unnecessary rabbit trails with brand-new characters that we have no reason to care about. Granted, bringing Ivy Pepper back into the forefront is a little out of left field, but at least we know who she is, so it makes enough sense to actually work.

But the “trial” itself falls flat as a plot device simply because it’s just a little too on-the-nose. We get it—Jim is conflicted because he’s always trying to save the world, but he knows it’s often at the expense of the ones he should care about the most. He promises to keep people safe, and they end up dying anyway. So he prosecutes himself and sentences himself to die (yes, I know there’s a judge there, but apparently he’s only there to bang the gavel every once in a while).

Ultimately, however, Jim realizes that, regardless of his past transgressions and failures, he needs to stick around for his yet-to-be-born baby. That makes sense, and I can appreciate the fact that we’re not subjected to a long line of people gushing over Jim and telling him how wonderful he is to convince him he should live.

Because, if you’ve been watching this show from the beginning, you know he’s really not. Yes, he means well most of the time, and he’s saved a lot of lives. But he’s also made some really bad decisions over the years, and a lot of people have gotten hurt because of them. Is he better than most? By Gotham City standards, definitely, and his good deeds (relatively speaking) do outweigh his bad ones. But it wouldn’t be fair to present him as the city’s blameless Messiah figure, so I’m glad the show doesn’t go that route.

What I can’t really wrap my head around is why Lee is so willing to jump back into a life with him after all they’ve been through. I get the fact that they still love each other and that they probably always have. But Gotham wants us to overlook a lot of history between the two of them to accept the fact that Lee would not only jump back into a relationship with Jim, but that she’d marry him (okay, so it’s not an official marriage, but still). But it’s not the craziest thing we’ve seen on this show, and it’s a nice moment. So I’ll allow it.

One more thing, though: why does Lee assume that, if Jim doesn’t make it, she and Barbara would raise Jim Jr. (or Jacqueline)? Barbara hates Lee, and while I remember her being willing to let Lee be her OB/GYN, that was out of necessity. Barbara would be much more apt to just take off, which is what she’s planning now (assuming Ed can make the whole submarine thing work).

As I mentioned earlier, bringing Ivy back and giving her another turn as the main villain works pretty well. It’s always fun to watch otherwise intelligent people turn into babbling idiots under the spell of her perfume, and Victor Zsasz is especially entertaining as his new lease on life—stop and smell the roses, don’t eat animals, etc.—doesn’t stop him from mowing down police officers left and right. And who would have thought that the easiest way to free someone from Ivy’s spell is simply to beat the crap out of them? That’s convenient.