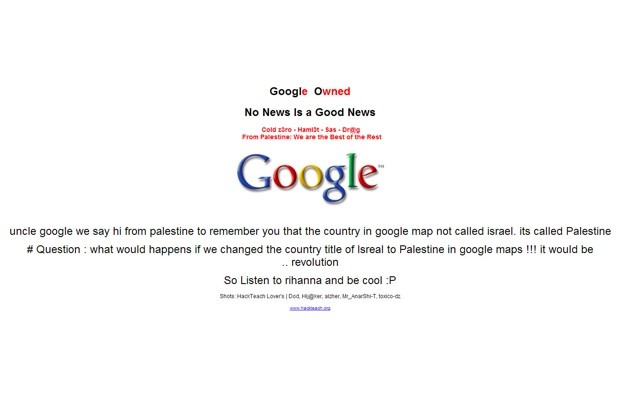 Google’s Palestine domain – Google.ps – appeared to be hacked and defaced by hackers from the region this week. The hackers defaced the site as a response to the Google Maps labeling of Palestine and Israel borders.

Early this year, the search giant had updated its service – Maps, Search etc – to display ‘Palestine’ instead of ‘Palestinian Territories’ for the region. This was done after a UN change-of-status-, that classified Palestine as a ‘non-member observer’ instead of an entity.

Defaced, the site displayed the message – ‘uncle google we say hi from palestine to remember you that the country in google map not called israel. its called Palestine’. The heading read – ‘Google Owned. No News is Good News’.

The message also asked the company to ‘listen to Rihanna and be cool’.

Google responded to the news with the following statement:

“Some users visiting google.ps have been getting redirected to a different website; Google services for the google.ps domain were not hacked. We’re in contact with the organization responsible for managing this domain name so we can help resolve the problem.”

Google’s decision to display ‘Palestine’ instead of ‘Palestinian Territories’ had caused quite a controversy. Palestinians welcome the move, with Palestinian president Mahmoud Abbas’s adviser going on to say that the move, saying the decision “put Palestine on the internet map, making it a geographical reality.”

Israel, on the other hand, reacted strongly to the change. The country said such a move would further damage prospects for peace.

“When a company like Google comes along and supports this line, it actually pushes peace further away, pushes away negotiations, and creates among the Palestinian leadership the illusion that in this manner they can achieve the result.” Zeev Elkin, Deputy Foreign Minister, Israel.

With Google denying any hacking of its site, it is now believed that Google’s domain provider for Palestine was hijacked, which the hackers used to redirect users visiting Google’s Palestinian site to another domain.

As of now, the domain has been restored, and the site seems to be functioning fine.