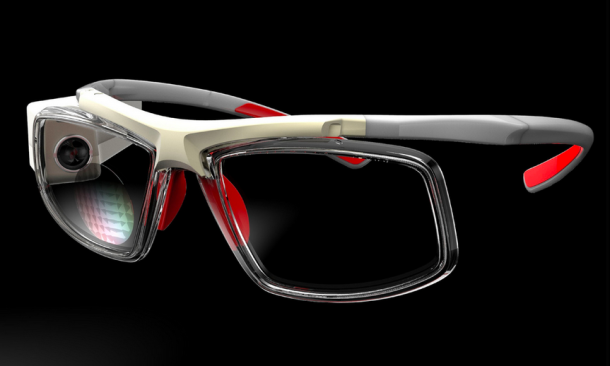 Italian company GlassUp has entered the augment reality market space with its own version of glasses. Named after the company itself, the GlassUp augmented reality glasses aim to provide a cheaper alternative to consumers wanting to experience Google Glass.

GlassUp recently listed its glasses on crowdfunding site Indiegogo. The company has already raised about $60,000 out of its $150,000 target. GlassUp will offer the same basic functionality available with Google Glass, allowing users to connect the device with their smartphone to messages, news, and other information on a heads-up display in their field of vision.

GlassUp will connect to phones via Bluetooth 4.0 Low Energy to project information on to its display, but will differ from Google Glass in many aspects. Unlike the top right portion of the field of vision, which is where Glass will throw up notifications, GlassUp will project its display “close to the center of vision”. This causes “less strain on the wearer’s eye”, according to the company.

GlassUp will itself run on Android, and will support pairing with devices running iOS and Android. Windows support is being considered for the future.

While Google Glass has sold for $1500 for the current Explorers edition, a GlassUp device can be yours for $299 only. Of course, GlassUp also sacrifices some features to achieve this price. While Google Glass has a 640 x 360 display, GlassUp will make do with a 320 x 240 resolution. Additionally, GlassUp, for now, will be a ‘receive only’. This means it will lack a camera, microphone, and will have no Wi-Fi connectivity. Google Glass on the other hand, will offer a 5 megapixel camera capable of recording 720p video, along with a microphone.

On the plus side, the lack of these features will get you a considerably larger battery life. GlassUp claims 150 hours of standby time, or 8 hours of usage.

Google Glass is expected to retail for approximately the same price as high-end smartphones. Even then, GlassUp makes up for a good bargain, provided you are willing to sacrifice on the camera and microphone.

GlassUp has said it will roll off its first devices by March next year, regardless of whether the funding goal is achieved.

Google Glass of course, remains the more hyped product. Expected to ship for consumers sometime next year, it is regularly in the news for a variety of reasons. Last week, we witnessed the first ‘arrest’ shot on Glass.