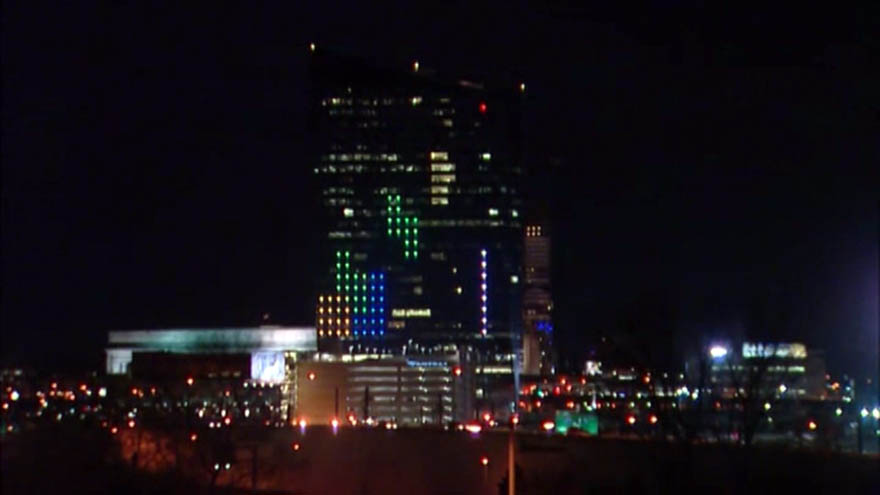 Tetris has always been huge in the gaming world but never more so than last April when Frank Lee created a 29 story version of the game. Lee, a professor at Drexel University and co-founder of the Drexel’s Entrepreneurial Game Studio, has officially been awarded the Guinness World Record for largest architectural video game display.

Fans of the addicting puzzle classic were delighted by Lee’s creation, which kicked off Philly Tech Week 2014. Lee, his colleague Gaylord Holder, and computer science student Colan Biemer embedded hundreds of LED lights on two sides of Philadelphia’s Circa Centre to create two humongous screens. He then used the skyscraper’s lighting control software to link the LEDS to his computer program. The total size of the display was 119,600 square feet-that’s larger than two American football fields!

Players used a joystick to control the game  from a mile away and more than 2,500 people watched them  move the colorful shapes into place.

Because a screen was created for both the north and south sides of the building, video game enthusiasts were able to participate in two-player challenges. One special player was Henk Rogers, the managing director of The Tetris Company.

Lee’s creation honored the 30th anniversary of Tetris, which was officially recognized on June 6. The professor was honored to be recognized by the Guinness Book of World Records but he also stated that this was not his main goal. He wanted his project to “unite the people of the city of Philadelphia around a public art installation – to give them a shared experience and inspire them to think about how a building can be more than just a building and, by extension, how the city can be much more than just a bunch of buildings and people sharing the same space.”

The success of Lee’s project shows that gaming can bring people together in unexpected ways. Both hardcore gamers and average passersby appreciated the beauty of Lee’s project.

Beating His Own Record

This isn’t the first time that Lee has created a video game on such an epic scale. In 2013, he used a similar method to create a 29-story game of Pong. Lee initially held the record for this display, which was also hosted on one side of the Cira Centre during last year’s Philly Tech Week festivities. Because his Tetris game utilizes two screens instead of one, Lee smashed his old record with a display twice as large as the Pong display.

Pong and Tetris are both fairly simple games but it’s exciting to think about the possibilities for the future of game design. It would not be surprising if Frank Lee manages to break his own record again one day. Check out the video below to watch footage from April of people playing the giant Tetris game. A Game Boy screen has never seemed so small.