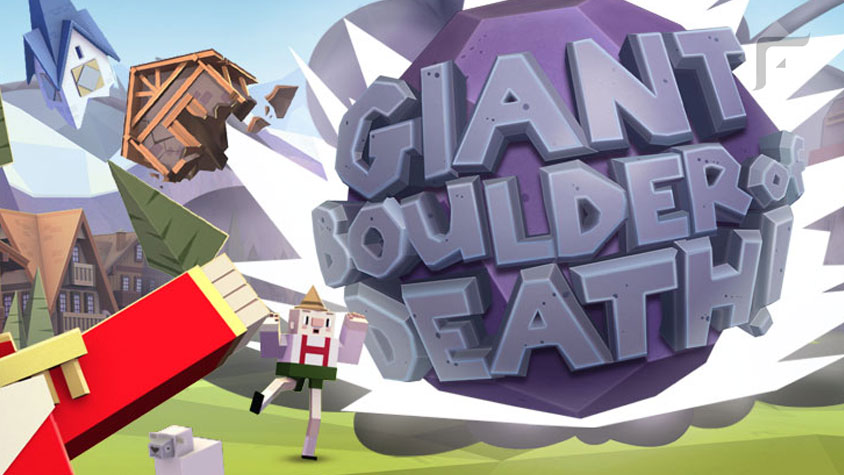 [Adult Swim] has a thing for weird and quirky games like Rainbow Unicorn Attack, Amateur Surgeon, and , and Giant Boulder of Death! is no exception. You play as a giant boulder rolling down the Alpine slopes, crushing unsuspecting Swiss villagers in a quest to avenge your one true love who was ruthlessly murdered at the hands of the local mayor.

The game itself is simple enough for a mobile game. You to move you tilt the screen left or right, and you tap to jump. The goal is to roll over and squish as many things as boulderly possible. To begin with, this is easy enough. There are a handful of villagers running around, and each one you crush beneath your hard granite will fill up a little bit of the progress bar on the left of your screen. Different targets are worth different amounts of points, and will fill your progress bar varying amounts. Once the bar is filled, the real fun begins.

When you finish filling up the bar, you transform into a GIANT BOULDER OF DEATH! complete with spikes, metal plates, and the unstoppable force of a great typhoon, allowing you to crush everything from houses to temples to banks. Unfortunately, the change doesn’t last long, and soon you’re reduced to your normal granite self, back to rolling over women, children, and cars. This happens as many times as can fill up the progress bar, assuming you don’t bite the dust at some point.

Once you’ve got the hang of unimpeded mass murder, the game steps things up a bit and starts to throw obstacles at you in the form of spiky barriers. Touch these and you’ll start to die. A dialogue box will pop up and ask if you want to continue at the price of the game’s rarer in game currency, and if you decline your boulder will detonate, hurling deadly fragments of rock hundreds of meters (you still get points for anything you blast, which is an added bonus).

Between runs you get to spend any coins you collected to by improvements for your boulder. These are divided between permanent and “spinner” upgrades. Permanent upgrades consist of your jump height, turning speed, and turning duration. To start out with, you turn like a drunken whale, jump worse than a middle schooler in gym class, and your Invinciboulder state lasts about as long as an ice cream cone in a microwave, so you’ll want to improve these as fast as possible.

The spinner upgrades are a little stranger, things like dotting the mountainside with high point yetis, reducing the number of spikes in play, or sucking coins and gems up when you pass by. The only trouble is that you can only have three of these upgrades active at a time, but not only are they chosen at random by the game by means of a virtual slot machine, but you have to pay gems for them if you want to use them. The game provides a free spin every ten minutes, but this is still one of the most blatant money grubbing techniques that I’ve seen in a freemium game.

As you play the game, more and more victims are unlocked, as well as more and more obstacles, and the mountainside goes from feeling sparse to completely overcrowded. Dogs, deer, and burly woodcutters clog the landscape to the point that you can’t roll anywhere without crushing something, and the majority of your victims are worth roughly the same amount of points, so there’s no real reason to go after any one target in particular. Your enemies get more robust and common too, to the point where you’re spending so much of your time dodging Tricerotanks and Mecha Yetis that you can barely do anything more than hope that you don’t get blindsided. The brief periods of invincibility you get when you fill up your progress bar are a joyful turnabout, allowing you to crush your tormentors without fear of consequence, but they’re often far too short. This gets to be extremely frustrating when the objectives you need to complete to unlock further portions of the game become increasingly complicated. There are times when I’ve gone 10, 20, 50 runs without completing an objective, and I’ve recently found that it’s actually faster to go around collecting the necessary gems to skip the silly things than it is to actually do the missions.

All in all, the gameplay is all right, if repetitive. Roll, squish, transform ad nauseam. While it can be entertaining to send little Swiss piggies and sheep flying, or crush buildings and tanks alike, the game has little staying value, since none of the new victims or obstacles change the gameplay in any meaningful way. Heck, most of them don’t even move.

The worst part of the game is the in game currency. Like with most mobile freemium games, the amount of in game currency that you get for your dollar is absurdly low. You have to spend $5 or more for a single upgrade at higher levels, and the alternative skins that they offer are even worse. For between $2-5 you can get an alternative skin that allows you to roll down Valentines, Christmas, or Death Metal themed slopes. Besides being ridiculously expensive for what is essentially a cosmetic upgrade, all your progress and permanent upgrades are reset, meaning you have to basically start from scratch every time you want to use a different skin.

Apparently the in game currency options aren’t working for [Adult Swim], though, because they’ve recently added pop up adds that will come up every time you finish a game. These are irritating, but you can get around them by simply disabling your device’s internet connection.

All things considered, Giant Boulder of Death! certainly isn’t the most engaging game around, and it has some incredibly irritating features, but as long as you don’t buy anything from it, it’s not a bad addition to your mobile collection. If you’ve got a particularly boring train ride or you know that you’re going to be on the toilet for a while, that is.