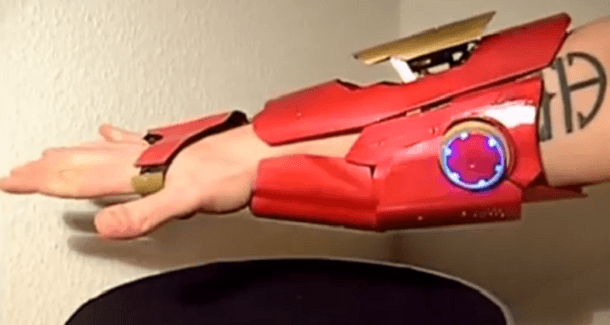 If anyone was ever enthusiastic about cyber weaponry, it’s this guy. Germany native, Peter Priebe, has fashioned his very own Iron Man gauntlet replica, but it isn’t just for show. This gauntlet, that looks like part of an awesome costume, is actually a really accurate, fully functional laser-weapon.

The ‘Iron Man Laser Gauntlet’ comes fully equipped with two 1.2w blue lasers and two 4mw red lasers. The wrist-mountable housing for the lasers was completely hand made and assembled by Peter, as well.

Of course, that leaves a couple of burning questions. What on earth inspired him to make this thing? When asked, Peter says that he was compelled to create the weapon when his girlfriend broke up with him. Well, that’s not creepy at all!

Does it work? Well, it probably won’t take down Whiplash, but it will take down some pretty vicious looking balloons…if you aim carefully. Check out the video Peter made about his creation (The balloons meet their laser-y death at 2:40ish):


The gauntlet runs on Li Ion Cells, two of which are 14,500 cells and one 18,650 cells. The lasers Peter used to aim are the 4mw reds, while the lasers used for blasting the balloons to smithereens are the 1.2w blues. Even though the lasers are not as powerful as some critics might like, I can see this being a blast (pun totally intended) at lots of different venues. Children’s birthday parties, a carnival, party supply stores, Prom, or maybe sneaking up behind one of those annoying balloon-animal-making clowns; Basically anywhere with lots of balloons and unsuspecting people.

Peter confirmed that his gauntlet took about 130 hours to complete. He invested about $650 in the gadget, which isn’t bad, considering he has already sold the gauntlet for $2,660. For an approximate 3 weeks of cumulative of work, a 2k profit isn’t bad!