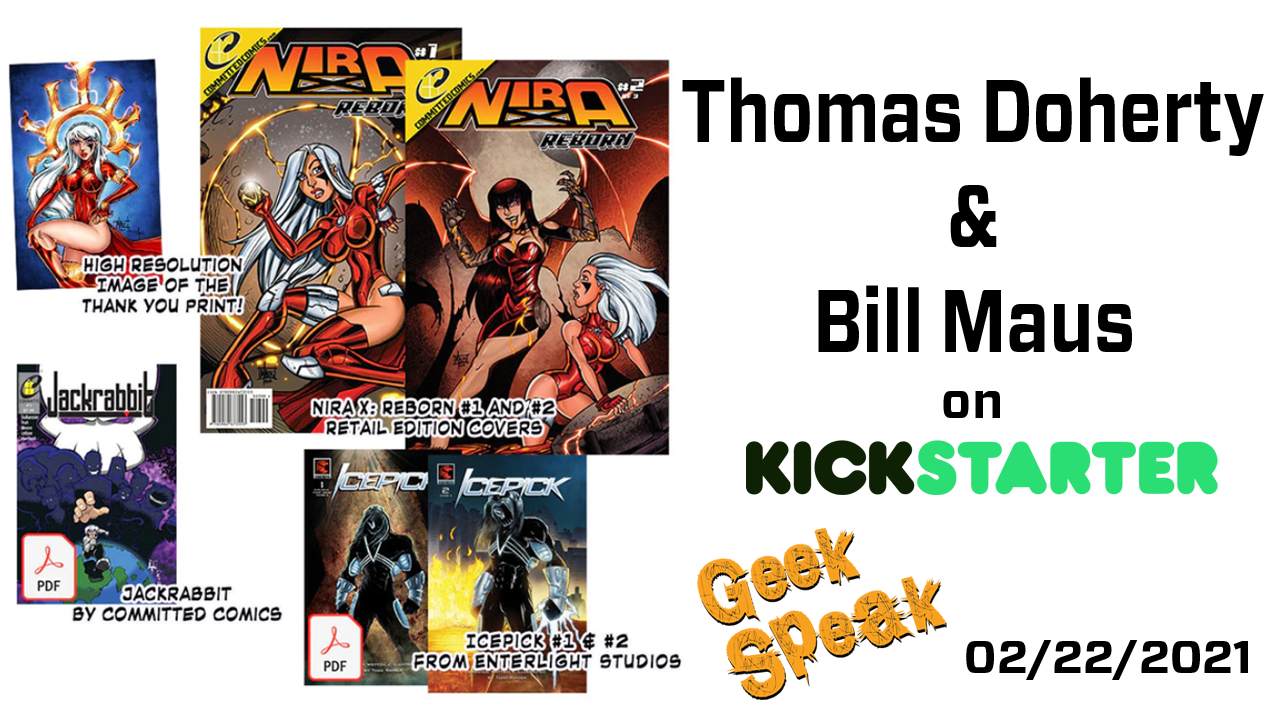 Nira X has been around for over 25 years and was one of the original bad girls of comics! She landed at Committed Comics in 2017 with the 300+ page Ground Zero Omnibus. REBORN # 1 debuted in 2019 and shot Nira X right into another adventure that picks up right after the events of Ground Zero Omnibus. The universe is unstable and folding into its self; the earth appears to have been temporally shifted, displaced, and saved – but for how long? No one knows.

The Kickstarter for issue #2 of Nira X: REBORN is active right now.

At 200 backers, Thomas Doherty is going to select a winner for the unused chromium covers. One is a Generation X cover and the other is X-Men Alpha. If you watch the Geek Speak, you will see that Thomas said that he will do a random drawing as soon as they hit 200 and the covers will be shipped out even before the campaign ends!

Back in 1996 Alejandro Cruz and Thomas Doherty conceived of a company where fans had some kind of voice. Both long time comic book fans themselves, they wanted to start a company where fans had the opportunity to get into the comic book industry and have their work be shown in the best way possible. Where quality of the artwork and the story telling were on the same level. In the mid 90’s it seemed that too many companies felt that in order to be an “independent comic” you had to publish comics that just focused on extreme sex or violence. Committed Comics wanted to show that an independent company could rise above the bad stereotypes.

Committed Comics was officially formed in 1999 and since then they have worked extremely hard in making sure they stay on track with the vision they started with. In spring of 2000 they partnered with Dawnfire Inc to produce the innovating RPG Dawnfire. It was released worldwide and had a beautiful original cover by renowned fantasy and comic book artist/painter Ray Lago. The summer of the new millennium was also when Committed Comics attended Comic Con International (better known as San Diego Comic Con) for the first time as an exhibitor.

Committed Comics was started back in 1999 to provide aspiring creators access into the comic book industry. Since that time, a bevy of amazing creators have produced comics that are innovating, fun and of the highest quality with us. If you are COMMITTED and love the comic industry then we challenge you to bring your A Game! COMICS FOR FANS BY FANS!

I got my first break in Comics in 1991, pencilling a parody for Eclipse Comics (inked by Bob Hanon, written by Don Chin) titled, X-Farce. After a couple more comics for Eclipse, I went on to work for Parody Press!, where I spent the next few years creating and drawing a whole bunch of parody comics. We also founded Entity Comics, so that we could have an imprint designed for original adventure content.

Our first Entity book was Zen: Intergalactic Ninja, owned by Steve Stern and Dan Cote, where I was fortunate enough to write and draw quite a few issues (of Zen), and later launch my own creator owned series, Nira-X: Cyberangel, along with some other titles, such as The Skunk. After my run at Entity, I worked at Avatar Press for some time, writing and drawing my creator owned series, Nira-X, and occasionally working on other company titles. Since then, I’ve worked on many small press books and independent comics, and continue to do so. Freelance allows me to have a variety of work and I enjoy having a much larger group of publishers and creators to work with. I’m always looking forward to the next thing-and also working on more of my favorites, like Zen.

On February 22, 2021, host Meredith Loughran sat with Thomas Doherty and Bill Maus for some comics talk.

Tune in to The Geek Insider Podcast on your favorite listening app. We’re on iHeartRadio, Pandora, Apple iTunes, and more.