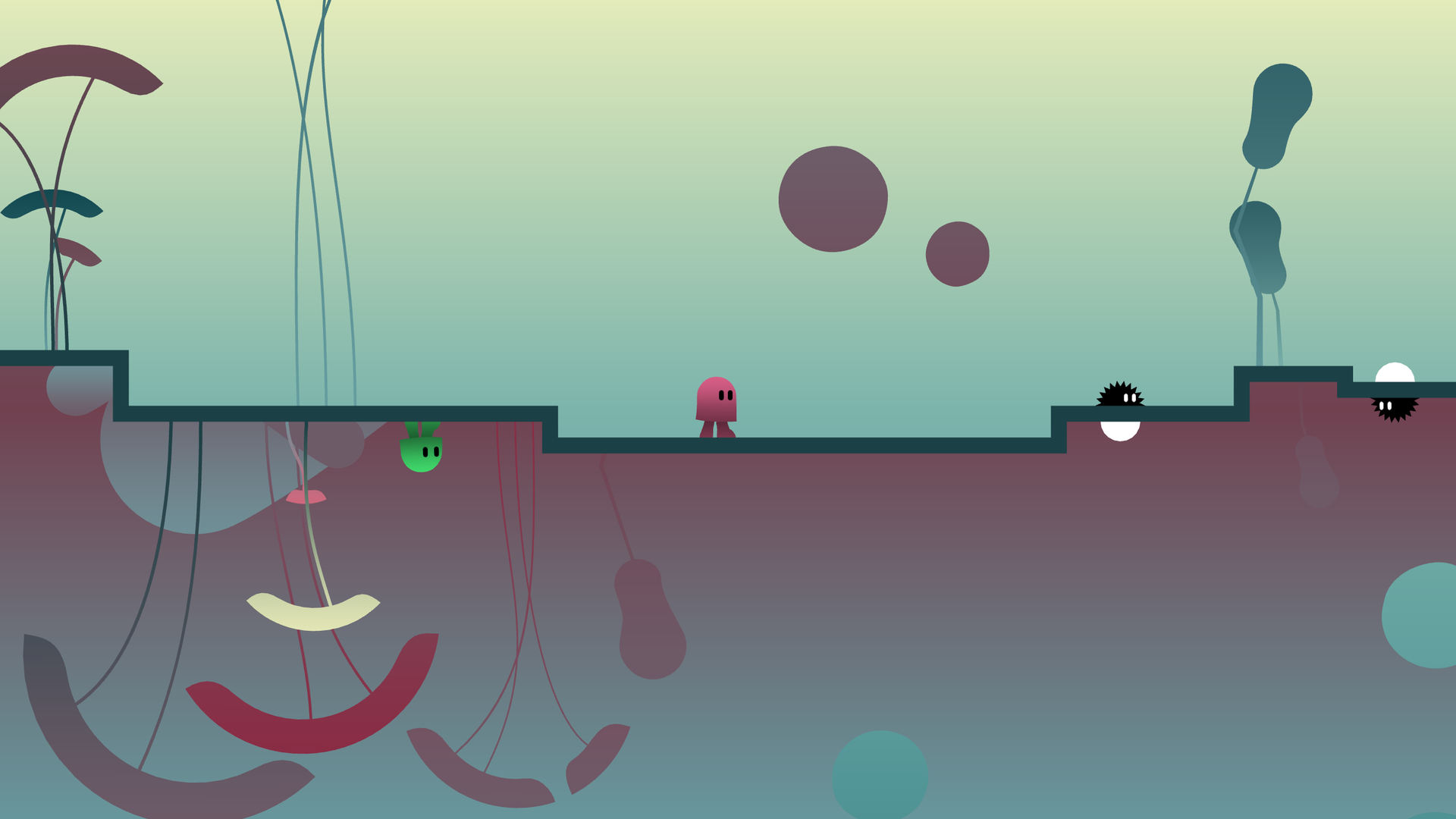 Sparpweed Games recently released a 2D platform game that is pure fun, called ibb & obb. This game is made for cooperative play and that is apparent from the very beginning. 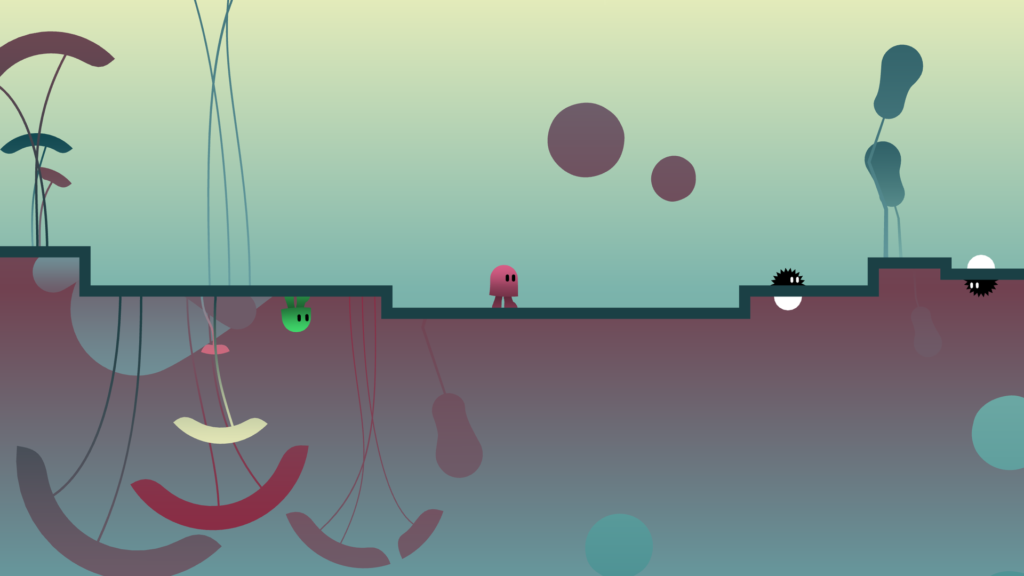 As soon as the game begins, you are immersed in a world of color and playfulness. The game weaves ibb and obb, the title characters, through increasingly difficult puzzles.

The unique aspect of the game is that the world is essentially split in two. There are portals throughout that allow the players to either stay on the top where things are normal, or move into the bottom half, where gravity is reversed. The result is that players can move seamlessly between the two halves to figure out different puzzles.  What adds to the complexity of the game is that there are certain portals that only ibb or obb can enter, as designated by their respective colors (green for ibb, pink for obb).  Both ibb and obb are thus given moments to be the “pilot” and the “co-pilot” when solving the various puzzles.

The game can be played by yourself, however it is definitely meant to be played with a friend.  Many of the puzzles require precise timing and coordination, especially if you are to collect the hard-to-reach and secret diamonds throughout each level.  Unlike other co-op games (such as the LEGO games and Ratchet & Clank), one person cannot simply carry the other to complete the game.  The two must work as a finely-tuned machine in order to progress to the latter stages of the game.

The puzzles themselves become increasingly difficult the farther you progress in the game.  At first, jumping on top of one another to reach higher ledges is all it takes.  Eventually, the two must use momentum to activate trampolines and slingshot through multiple portals to continue.  The game does a good job of slowly increasing the complexity and none of the puzzles were too frustrating.  You really feel accomplished and rewarded when you finally get to the end of the level.

As mentioned above, the world exudes color and playfulness.  Ibb and Obb themselves look like little gumdrops with legs and the world they traverse is very colorful.  The actual levels themselves are not too varied.  You basically travel along a straight line for most of the game, but there is enough happening in the background to keep you engaged throughout your journey.  The music is also very relaxing and subdued, adding to the overall feel of two friends going on an adventure.

Ibb and Obb aren’t the only creatures you will encounter, either.  There are plenty of block-shaped friends to help you reach higher areas, and there are hundreds of “ubbs,” miniature gumdrop creatures that you can bounce around the levels at your leisure.  The ubbs don’t really help you complete the game, but they are there for a nice distraction… kind of like when you kick a pebble down a street on a walk.

Also along the way, you’ll encounter black and white baddies, which are the only creatures that hinder Ibb and Obb’s journey.  They come in various sizes: small, medium, or large (or tall, grande, and venti for the Starbucks inclined).  To defeat them, you must attack the white portion of the creature, causing the black portion to explode into a cloud of diamonds.  However defeating them isn’t enough, as collecting the diamonds is the main form of tracking your expertise in the game.  Being able to have ibb defeat a row of baddies while obb collects the diamonds is a puzzle in itself.

ibb & obb is a lighthearted, playful romp through a colorful world.  The puzzles are fun and challenging, the world’s inhabitants are cute and charming, and the fact it is best played with a friend makes it all the more fun.  It is a journey worth taking… just make sure to bring your friend along with you!