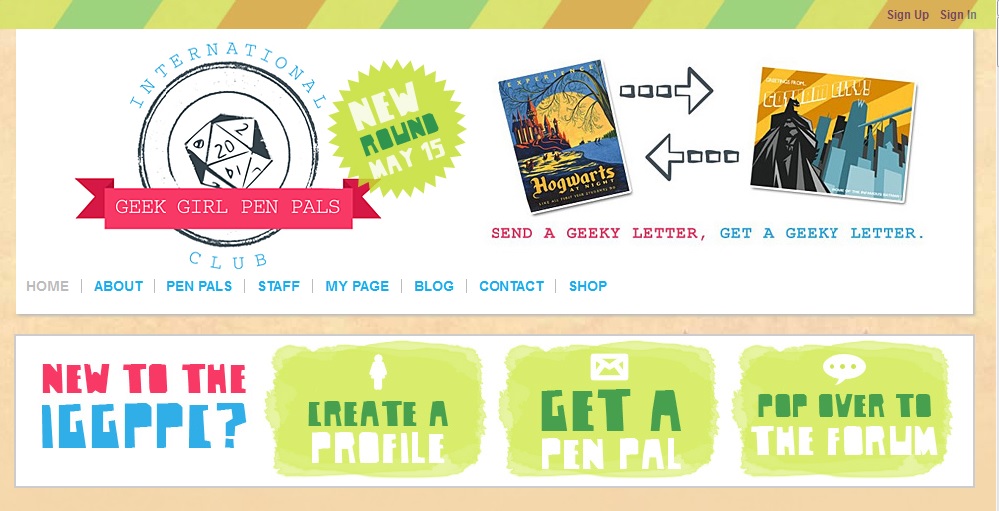 International Geek Girl Pen Pal Club is a new organization dedicated to the awesome intersection of meeting new geek friends and the dying art of letter-writing. The amazing staff, four creative and geeky ladies of different nerd-doms, match pairs of pen pal seekers with their geeky soulmates. Emily Farquehausen, one of the organization’s founders, was kind enough to talk with me about the mission of International Geek Girl Pen Pal Club, and all things geeky.

Looking over this site, I couldn’t help thinking about how much I would have enjoyed this when I was growing up. What inspired you to start this program?

Our origin story is a daft one! As much as I would love to say we started IGGPPC because of some deep seated need to connect with other women, or some profound flash of inspiration, it was actually because Stewie (the other co-founder) wanted a curly wurly [Curly Wurlys, for our American readers are lovely caramel and chocolate bars, just one of the delicious Cadbury treats that is only available for Brits. — Meg] and I was feeling nostalgic as I had found all my old pen pal letters earlier in the week. We brainstormed an idea and ran with it. At inception we had no idea that this is where we would end up. We started with a simple one page registration form and a hashtag now we have this massive community of engaged, creative, smart, passionate ladies who are bonding over fandoms, crafts, science, history, books, you name it and a few of them probably love it. The great thing about this community, no one feels excluded and we just want people to be themselves! Everyone is welcome at our party, even boys!

With so much social networking and online interactions, old-fashioned letter writing is an unusual choice. Why did this appeal to you and the other founders?

Receiving a letter or parcel in the post is a pleasure often overlooked in this day and age; it’s easy to forget that there are more things a postman can bring you other than bank statements and bills. There is a lot of love that goes into letter writing. It’s so easy to fire an email over to a friend, but to write a letter takes time. You have to think about what you want to say so you don’t ruin your best stationery crossing stuff out, there is no backspace key in real life! To me the whole process of letter writing is almost like a dance. You write your letter, with care and attention, then take it to the post office to send it. Then it travels through towns and cities, across land and sea until it reaches its destination. In the meantime your pal has been waiting in anticipation for a letter they know is coming, and each day they wait for the postie to see if it has arrived. When it does, they jubilantly open the letter and devour the contents, poring over each word. Then when they are done, they pick up their pen and begin to compose a letter right back and the dance begins again. 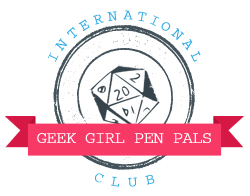 How many pen pals have you matched so far?

So far we have matched 3000 pen pals. We opened Round Four on May 15th so this will take us up to 4000, which is madness as we only launched in March!

How would one of our Geek-y readers go about getting a geeky pen friend?

On the 15th of each month we open registrations for pen pals, just head over to the site and follow the “Get a Pen Pal” link on the homepage. We have a maximum of 1000 places every month and they fill up fast! Once registrations close we start the process of pairing people up who are in the same age range and have shared or similar interests.

This is such a lovely way to meet friends with similar interests! Do you know of any penpal pairs who’ve met in real life after being matched on the site?

Thank you! We have been told a few times that we have matched people with their geeky soul mate, it doesn’t get much better than that! I don’t know of any pairs who have met in real life (yet!) but one of our members organised a meet up at C2E2 which around 15 ladies went to! There’s also a bigger meet up planned for June in New York and in July I will be at the Manchester Comic Con meeting a few of our UK members!

There are so many flavors of geek! What type are you?

So many flavors, more than you could shake a very big stick at! I would say that I have my fingers in a lot of geek pies (which sounds kinda dirty haha), I’m an eclectic geek if you will. Off the top of my head some of the things I geek out for are Twin Peaks, Star Wars, Jhonen Vasquez, Baking Books, Kingdom Hearts, Archer and Portal. I could go on and on and on….but I won’t!

If Ron Swanson and Hunter S. Thompson met, would they eat steaks or do psychedelic drugs together? (Inquiring minds want to know, and defer to you as the expert.)

Hot damn, that might be the greatest question I have ever been asked. I do have a strong love for both Ron Swanson (and Parks and Rec in general) and Hunter S Thompson. I think if this ever came to pass that they would do both; eat steaks, drink lagavulin, dabble with acid and set the world to rights. Then the world would break into a million pieces as it couldn’t possibly handle so much win.

The concept of the “fake geek girl” has been flying around the internet. (For those lucky enough to be unfamiliar with “fake geek girl” rants, this is based the assertion that women and girls just pretend to like geek things for, uh, the attention of male fans. Hey, I didn’t say it was a smart assertion!) How would you respond to that?

To be completely blunt: f**k those guys and their outdated attitude. It doesn’t matter if you are male or female, define yourself, love what makes you happy, try new things and do not under any circumstances feed the trolls. If you love something, why does it matter who does or doesn’t love it, if it brings you joy who cares what others think!

I think some people get too caught up in their own haughtiness…”well I have loved Batman 20 years and you have loved Batman 2 years so therefore I am superior to you.” To which I say: No, that is not how the world works, your knowledge after 20 years may be greater but you do not get to judge and/or diminish anyone else because of it. If anything you should be a guru, welcoming into the flock of shared appreciation rather than trying to turn your geekdom into an elitist oligarchy.

Whatever walk of life you hail from and whatever social circles you travel in, you will always come across the so called “fakers” be they geeks, jocks, girly girls, whatever. What I don’t think people often consider is that these “fakers” are just trying to find their place in the world, establish themselves and find a social group that they can feel comfortable in. I hope that in the International Geek Girl Pen Pals Club we have created a place where people can express, share and bond over any number of geeky topics they love, be them new to the subject or not. IGGPPC HQ is a judgement free zone!

Thanks so much for your time and the laughs, Emily! Readers, you can meet your own geeky penpal at IGGPPC!