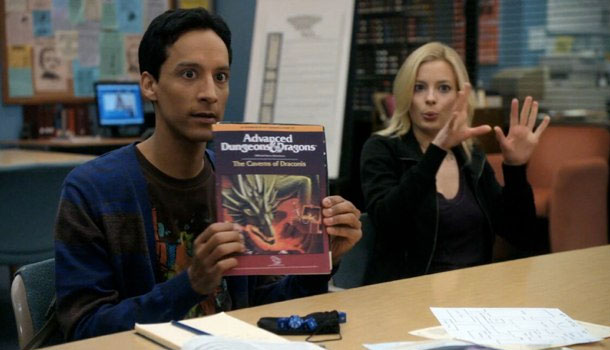 TV is not particularly well known for depicting things accurately. Any computer that the whiz-kid hacker puts his finger-less gloves to will invariably make all kinds of beeps and flicking noises. The grouchy old doctor/police officer will be a complete asshole to his colleagues, but will always end up being right, and totally validated in his terrible attitude. People with glasses will always be smarter.

The examples of ‘stereotyping’ on television are varied. One thing that needs to be addressed is the depiction of gaming. From utterly laughable to sometimes adept, Hollywood has never had an easy time showing one of humanity’s favourite past-times, and in fact there are so many good examples this article had to boiled down to one game to fit. That game is Dungeons and Dragons.

Beyond lazy one-liners about being fourth level, or about rolling dice, TV has had scant few opportunities to tackle the table-top role playing game in any kind of deep context. Those that do have had varying levels of success (they also, mostly appear to sitcoms). Here’s a couple of shows that attempted to capture the magic of sitting around a table for multiple hours using your imagination.

Almost as famous as that paintball episode (and that other paintball episode), Community‘s Dungeons and Dragons episode is actually quite a nice surprise. What started as an attempt to cheer up a suicidal classmate quickly turned into a no-holds-barred, all-against-Pierce showdown of epic proportions (not unlike how the behind the scenes controversy ended up).

Not only is it relatively accurate in terms of game play, it’s also quite good-natured, and plays more upon the interpersonal relationships of the characters that we know and love. At no times is there a cheap shot, the jokes remain on the characters and how utterly they manage to ruin the game for themselves. Of course, the biggest scene on note is when Annie (playing a male elf), describes in what we can only suggest is graphic detail, her seduction of the lonely shopkeeper.

D&D Rating: 7/10. Not especially accurate, but with a sweet heart.

Lazy-sitcom masquerading as Geek-chic strikes again! Aside from coining catchphrases and furthering the stereotype that women are hard to talk to, TBBT also scrapes the bottom of the barrel for it’s “D&D is weird” spectacular:

I think the main thrust of this clip is: Women don’t play, everyone’s a virgin, and you’ll need alcohol to enjoy yourself in a situation like it. Okay, I’ll move on.

D&D Rating: 2/10. It’s the perfect show for the dumb people who like to imagine how smart people talk.

This one only partially counts, as its not really the main thrust of the episode, entitled “Bored of the Rings”. If you haven’t seen it, Sarah’s two friends are supposed to having a date night, when Brian’s D&D posse show up and he decides to play with them instead.

What follows in this B-storyline to Sarah’s main abortion clinic narrative is more about growing up and making a difference (no matter how farcical, and how many arrows in the butt it takes) than it is about slaying goblins. Accuracy is hard to measure on a program which trades on being absolutely surreal all of the time, but to the show’s credit, they do have all of the figurines and a delightfully marked pad of paper to make a crude map.

There was no question here that this was going to be a fairly well-rounded adaptation. The nerd-force that is the writers of Futurama has delved into D&D on numerous occasions, even going so far as to get creator Gary Gygax in on the joke for one episode.

Their love affair then spiraled into a whole feature length episode, Bender’s Game (also dedicated to the now late Gygax), which may be the geekiest thing ever broadcast; drawing from Lord of the Rings and D&D in equal measure to create a fantasy universe of orcs and the like. Aside from ET, this is a hard one to beat, accurately depicted, and clearly made with love and a supreme amount of foreknowledge.

D&D rating: 9/10 – C’mon, look at the guys who write this show; they live and breathe Dungeons and Dragons.