Jurassic Park 4 was recently confirmed by Universal studios, and let me just say one thing: AAAAH OH MY GOD YES. After languishing in “development hell” for over a decade, which is such a crazy term for what is essentially two executives saying “we couldn’t make a good enough movie”, it looks like we’re finally dusting off Isla Sauna, we’re going into the long grass, we’re rebooting the UNIX based-operating system.

We’re getting Jurassic Park back online.

Okay, let’s get some perspective and work out what we know so far. The short answer is: not much. It seems Jurassic Park 4 has been brought forward in the schedule at the expense of yet another installment of Pirates of the Caribbean, but with a new director, and no script thus far, will it be amazing, or just really good? What has become of the latest cinematic outing for feathery, tooth-filled friends?

Life finds a way: It has a name

British newspaper The Guardian were among the first to break the news with a vaguely rushed article about a theme park built by “Richard Hammond” (of Top Gear fame?). Still, they announced the title, the curious Jurassic World.

I’m not too sure about this revelation of this title, it has shades of a B-Movie about it. If it starts in the post-apocalyptic hellscape that has become our planet, where the last few human survivors hide out from packs of reptilian beasts that roam the surface, I’m probably going to ask for my money back. I’ve seen Planet Raptor, I don’t need to add this movie to my list of “things I wish I could erase from my brain”.

You didn’t say the magic word: It won’t look like this

Thank God, but this footage, which leaked online a few days ago, turned out not to be test footage for the new movie, but test footage for a video game instead. Possibly a video game about being a giant, goofy-looking pterodactyl that eats surfers and hates lifeguard huts. Or maybe you are the surfer who has to defeat the pterodactyls, with the power of surfing. Actually, on second thoughts that sound pretty amazing, I may have to get a Kickstarter going.

Ian, Freeze!: And it absolutely won’t be this 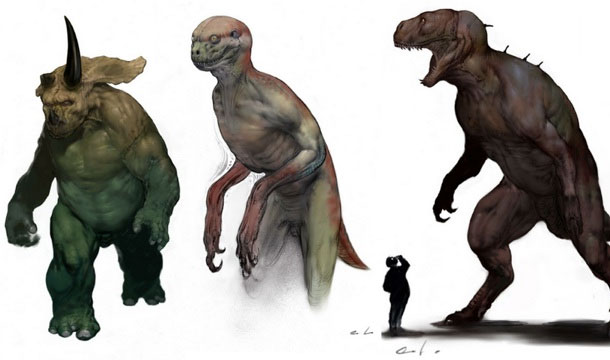 This may be my favourite thing on the internet. It almost gave me a heart attack back in 2007 when it was first announced, but it’s since become a tale I love to regale people with.

“Did you hear about when the initial script for Jurassic Park was about a team of super-smart hybrid human-dinosaurs that carried guns and worked as a team and had Greek names?” I ask, tears welling up in my eyes. “Development Hell” seems like an understatement for this script, unless that hell was a Gothic horror written by Mary Shelley. I enjoy reading this account from the guy who went to flick through the first draft; his quick devolution from excited optimism to borderline insanity tells me this could have been something very special.

Hold On To Your Butts: It’s directed by this guy

Colin Treverrow, famed for Safety Not Guaranteed, is signed on to direct, but at this stage that’s hardly news. How he’ll translate being an Indie darling who is best known for a meditative flick about faith and time travel into an action-adventure starring a forty-foot tall carnivore (slightly less subtlety in the latter) remains to be seen, but he does seem to have a good sense of humour (here referring to failed dinosaur supervisor Phil Tippett).

Alright, Phil. We’re going to give you one last chance. Keep your eyes peeled and remember, they can open doors. #JurassicWorld

I’m excited for him. I really liked SNG, and I’m sure he’ll be more than capable of presenting some pure sauropod terror onto our screens effectively.

Clever Girl: What we need

So what should the new JP film be about? Let’s ditch crummy pterodactyls and velociraptors with long human arms, I’d honestly be quite happy if we just went back to basics. A group of people (maybe including an unattainable girl next door, given Treverrow’s previous) accidentally find themselves on the Isla Sauna during a team-building exercise or something (context is not my strong suit). They have to put aside their interpersonal conflicts as they pick their way through the rubble of the Park, hunted and inspired by the dinosaurs at every turn (we definitely need a return to the majesty and wonder of the earlier films).

I know a lot of people are awaiting a return of Jeff Goldblum et al., but I literally can’t think of a single reason that would bring any of those characters back to the island. And it can’t be worse than the third one, right?

I have only one thing left to say to the directors and producers regarding this movie: “Shoot her!”