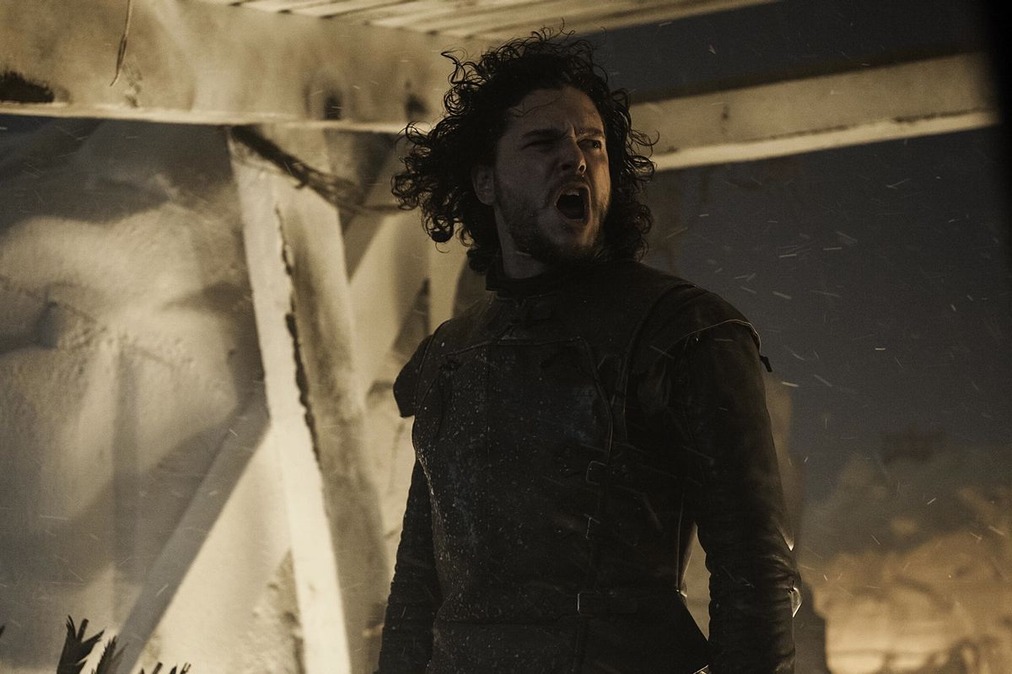 It’s all the Wall, all the time this week on “Game of Thrones.” So we have to wait until next week’s season finale to learn about the aftermath of the duel that left the Red Viper as the red pancake (tear) and put Tyrion on death row. This week’s episode is titled “The Watchers on the Wall” and focuses on the Battle of Castle Black. Mance Rayder has forces on both sides of the Wall ready to strike. Right from the get go I had a strong feeling a lot of our crow buddies weren’t going to make it through the night. But enough speculation, let’s get to it!

To the Window, to the Wall (Actually, I don’t think the Wall has any windows…)

The invasion is coming and both sides know it. So we get some preparation time early on in the episode. Jon and Sam are walking on top of the Wall. Sam naturally wants to know about a very Westeros appropriate topic before the impending war… what it was like when Jon shtupped Ygritte. Speaking of Ygritte, she’s sharpening arrows with the Wildlings south of the Wall. She calls dibbs on Jon, even though the others don’t believe she’ll actually kill him.

The tension is mounting, so let’s slow it down with Sam and Maester Aemon in the library. They just talk about wildlings and how they like girls, but what’s more important is that the scene shows Sam isn’t just a loser anymore. He is actually a respected member of the Night’s Watch. Good for you Sammy boy. He leaves the library to find Pyp arguing with Gilly at the gate. He has orders not to open it. But Sam, the bad ass that he is, swears at Pyp and he opens it. He hides her in the kitchen where he assumes she’ll be safe. Before he leaves he does two things. Firstly, he promises her he won’t die. On “Game of Thrones” that means you are going to die in a horrific way very soon. Remember the Pancake of Dorn promised the same thing last week. Then he kisses her! And not a small peck. He smooches that Wildling like there is no tomorrow. But then he leaves for the battle.

The forest north of the Wall is on fire, so that means it’s time to attack. Ygritte’s group attacks from the south as the crows perched on top of the Wall shoot arrows at the forces on the North side. Alliser Thorne concedes to Jon that he should have taken his advice about sealing the tunnel entrance. For the first time, he comes across as a reasonable person. He leaves command of the Wall to the resident waste of space, Janos Slint while he goes to aid those on the other side. But Slint’s command doesn’t last long since he’s a whiny coward. Grenn tricks him into joining the other battle. So guess who is in charge now, Jon “do you want to build a” Snow (man). Slint runs and hides in the kitchen where Gilly is.

The southern wildlings have gained entry to Castle Black and this is where the hand to hand combat is going down. Ygritte’s body count keeps growing while nameless Night’s Watchmen are dying at a quick pace. One of the casualties is our pal Pyp, who gets an Ygritte arrow through the neck. He had just made his first kill before dying in Sam’s arms. Ser Alliser engages with Tormund in a quality sword fight. Thorne gets wounded and is dragged into hiding by his allies. We are told he dies soon after. Sam has some trouble loading a crossbow as a large Thenn charges at him. He looses the arrow through the cannibal’s head right at the last second. He admires his work for a second. At this point, I’m sure his demise is coming. He gets in the elevator, but the little boy, Olly, who is operating it is scared. Sam convinces him to be brave. He’s standing still too long, he’s going to get shot! …But he doesn’t.

The battle north of the Wall has a number of awesome incidents. A bunch of wildlings try to climb the Wall, but right when they get high enough a big anchor like thing is released and it swings down killing them all. A giant, fighting for Mance Raydor, shoots a huge arrow that launches a crow to a brutal death/fall. Oh and did we mention the giants are riding dirty on wooly mammoths?! Epic. The Night’s Watch drops barrels of oil from the Wall and later ignites them, killing a group trying to penetrate the gate. Somehow the Night’s Watch seems to be winning on this front.

A giant gets through the outer gate and Jon sends Grenn and a few others to defend the inner gate at all costs. There isn’t much sentimentality, but it’s a suicide mission. Sam arrives at the top and tells Jon about the battle inside the castle. Jon leaves command to Edd and joins the fray below. He has Sam release Ghost. That’s right, the all-white killing machine/ dire wolf has been locked up this whole time. He could have killed tons of wildlings by now. Once Sam lets him out, he goes to town on some enemy throats.

With Jon running the show, the good guys seem to be turning the tide. Styr, the Thenn leader, gives him a beating though. The highlight of which was Jon’s head slammed into an anvil, Wile E. Coyote style. But Jon kills him with the classic hammer through the head technique. It works every time. Ygritte sees Jon and closes in on him, arrow drawn. Jon smiles at her. He seems ready for it. But she’s hesitating like the wildlings said she would. Bam, she gets an arrow throw the back. Olly, the little kid who was spared in a wildling raid earlier this season, gets his revenge. He gives a sly nod to Jon before Jon rushes to his fallen lady’s side. They have a moment before she mutters her final words. They’re the only final words appropriate for Ygritte. “You know nothing, Jon Snow.” Then, death. How no one kills Jon while he’s just sitting in the open holding her, I don’t know. The last wildling standing, Tormund Giantsbane, is defeated, but kept alive on Jon’s orders. I think this is a big mistake, but they didn’t ask my opinion. They take him away to chain him up. Up top it seems Edd did a good job since those enemy forces are withdrawing.

So with big loses, the Night’s Watch have defended the Wall. They are still massively outnumbered, but this battle has gone their way. Jon, the unofficial boss now, has a plan to end this before another attack. He’s going to go beyond the Wall and attempt to kill Mance Raydor, which would hopefully break up the clans and remove the threat. In the real world, they’d probably shoot him at first sight and he’d be dead, but that’s not very dramatic. So we’ll see what happens with this plan/death wish next week.

On the way to the gate, Jon and Sam come across Grenn and his men, who are dead next to an equally as dead giant. They were successful in holding the gate. We didn’t get to see that fight, but in the buildup Grenn recited the Night’s Watch oath with his comrades in epic fashion as the giant charged toward them. It’s another sad death for one of our trusted supporting characters, but it’s a rewarding one also. He did his part. He effectively saved the day by keeping his word to Jon that they’d hold the gate.

Jon gives Sam his sword for safe keeping before he heads out. Fade to white and then our watch is done. For this week at least because next week we have the “Game of Thrones” season four finale. Hopefully we get some answers before the long off season. In the meantime add Pyp, Grenn, Alliser Thorne, Styr and our beloved Ygritte to the “Game of Thrones” death list. Somehow Sam has survived the ordeal. If the writers didn’t purposely make it look like he was going to die, I’d be surprised. But here he is, having survived multiple White Walker encounters, the mutiny at Craster’s Keep and now the Battle of Castle Black. He’s quite the war hero. Let’s take a deep breath and get ready for the must see finale this Sunday!