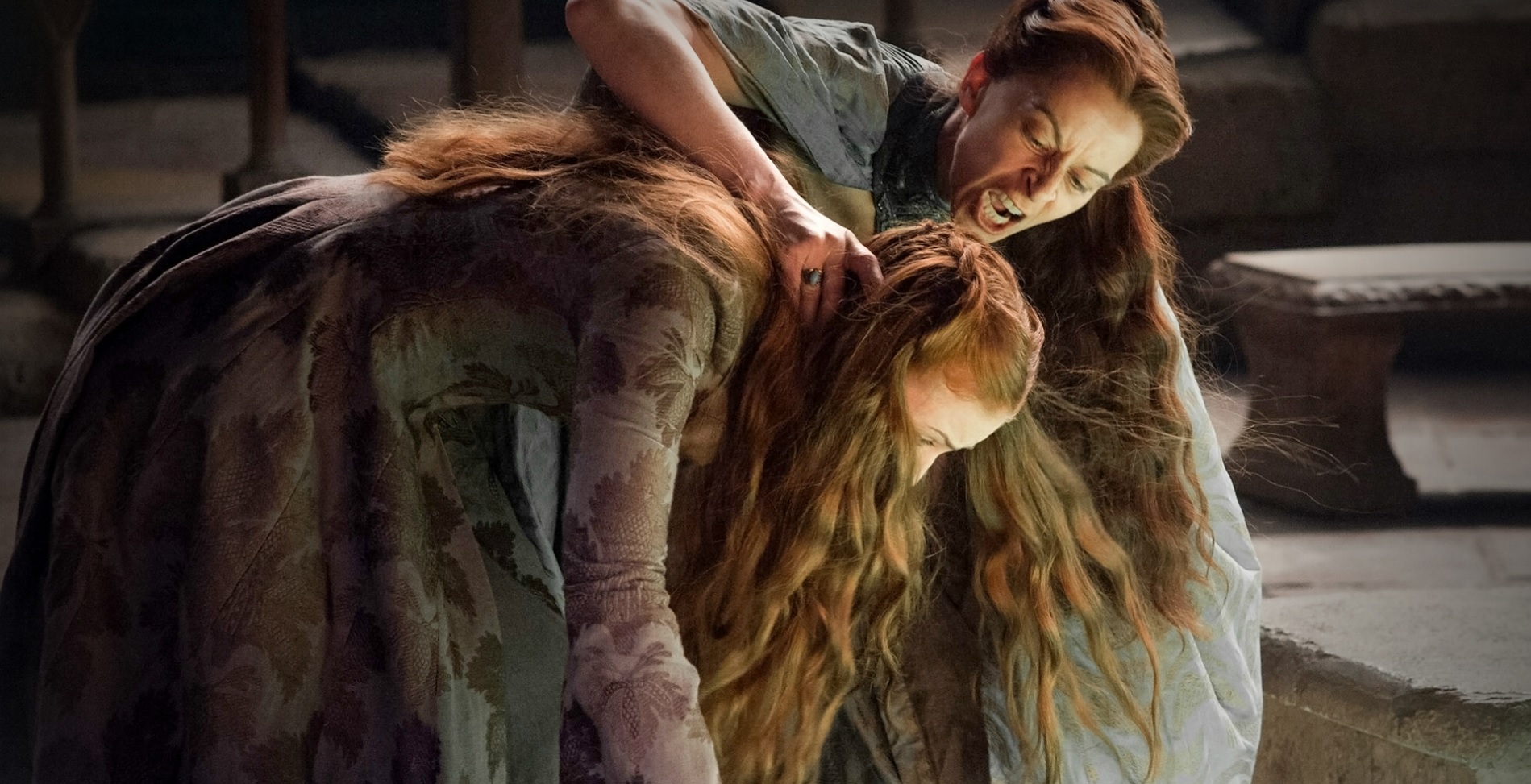 I am back from my trek across the Narrow Sea. I saw everything! Daario Naharis’ junk, I rode a boat through the crotch of the Braavosi statue and I even got mistaken as a slaver. I’m all like, “Don’t nail me to a post, guys! That ain’t me.” The red waste, by the way, not so bad. There’s a Starbucks on every corner. In truth, I was just on vacation in England and it was lovely. A big thank you to Faith for covering last week’s “Game of Thrones” recap.

Episode seven of season four is titled “Mockingbird” and boy am I ready to chirp about it. We’ll start from the top (of the map) at the Wall where the snowman, (nobody calls him that) Jon Snow returns from his successful whooping at Craster’s Keep. Preparing for the wildling invasion, he suggests that the Night’s Watch seals the passage through the Wall. Ser Alliser Thorne thinks it’s a bad idea just because no one ever sealed it before. Plus he hates Jon, so the idea is ruled out. It’s a little known fact that Thorne’s name was actually shortened when he joined the Watch. It was originally Alliser Thorneinmyass-bigannoyingjerk. They were a noble family.

At Dragonstone, Melisandre is taking a bath and let’s just say the water is shallow enough the make it “Game of Thrones” appropriate. Mrs. Stannis, Selyse, comes in and voices her concerns about bringing her daughter Shireen with them when they leave Dragonstone. Melisandre says the Lord of Light needs Shireen, so she has to come. It’s okay though, Selyse. They’d never kill a child on this show. (See- Mycah-the butcher’s boy, Lommy Greenhands, King Joffrey Baratheon, and others not important enough for me to remember at this moment.)

Across the Narrow Sea in Meereen, Daenerys finds Daario Naharis in her room. He complains that he needs to make use of his two talents, war and women. He’s being modest, you should see the guy play “Angry Birds.” Three stars all day! But anyway, Dany tells him to drop trou. He does. This is “Game of Thrones” after all. We get a clear shot of his bootay for a while and cut to the next morning. Ser Jorah sees Daario leaving and brings up some valid points  to Dany on why she shouldn’t trust him and the Second Sons. He also convinces her to alter he orders to that group, who are heading to retake Yunkai. Don’t kill all the masters. Instead give them a chance to follow her rule. She also wants the son from last episode, who pleaded for the right to bury his father, to go with them and advise the masters there.

In one of our two road stories this week, the Hound and Arya speak to a dying man for a few minutes. But then, some dude jumps on the Hound and bites him because that is obviously the most effective way to kill a battle-hardened warrior twice your size. The Hound kills him and Arya kills his companion. Later they’re having a campfire, which unfortunately lacks s’mores. The Hound refuses to let Arya cauterize his bite wound because he hates fire and such. He opens up about when he was burnt as a child by his brother. Hmm, the Mountain seems to be coming up in conversation a lot this season.

Now we arrive at the feel good moment of the season. One I didn’t know I wanted. Brienne and Podrick are at an inn. She is served a pie of some sort. It might be a cold pie, but it would seem not. I guess that means it’s a hot pie. I wonder who made such a delicious meal. Well seven hells, it’s our old pal HOT FREAKIN’ PIE. I thought we’d seen the last of him, but here he is. Brienne enquires about Sansa, who she’s searching for, which makes Hot Pie nervous. He later approaches them and tells them about Arya. Pod suggests he and Brienne head to the Vale since Riverrun is now ruled by Walder “Worst Wedding Planner Ever” Frey. Brienne reluctantly agrees. Goodbye for now Hot Pie, but it was nice catching up. 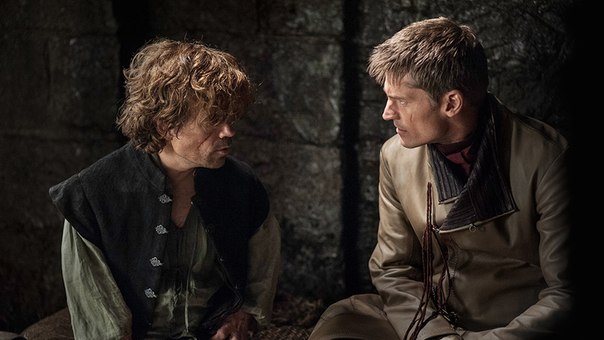 In King’s Landing things are continuing to heat up. In fact, it seems things are always heating up there. Jaime is mad at Tyrion for the emotional (yet awesome) outburst at the trial that ruined the chance for him to survive the ordeal by joining the Night’s Watch. Tyrion also begins his campaign to find a champion for his trial by combat. Jaime declines, citing his poor form since losing his hand. 0 for 1. We learn who will be the opponent representing Cersei, and by George who would have guessed it, it’s the Mountain. I feared it was going to be Jaime for a minute. I’m glad that’s not the case. The Mountain is killing a bunch of prisoners when Cersei approaches him. Back in the cell, Bronn visits Tyrion in some fancy clothes. He has been paired with a highborn lady and is to be married soon. He also declines Tyrion’s request to represent him as champion during an honest exchange between the two. Bronn admits to being Tyrion’s friend and liking him, but he’s not too keen on dying for him. 0 for 2.

Well I guess Tyrion is out of luck. But we have another visitor. Prince Oberyn stops by to partake in possibly the best bit of dialogue in the history of the show. Tyrion: “If you’re looking for justice, you’ve come to the wrong place.” Damn straight! And to sum up the entire conversation, Prince Oberyn. “I want to bring those who have wronged me to justice. And all those who have wronged me are right here. I will begin with Ser Gregor Clegane, who killed my sister’s children and then raped her, with their blood still on his hands, before killing her too. I will be your champion.” It’s also worth stating that Peter Dinklage’s performance in the scene is absolutely incredible. On the third try, Tyrion has his champion.

I often close with King’s Landing because the scenes there are so awesome, but not this week. We end in the Vale where the characters are so annoying we feel sympathetic to the queen whiner, Sansa. Speaking of Sansa, she finds a bit of happiness building a snow castle resembling Winterfell and thinking back to her time there. Robin comes around sounding very Joffrey-like by talking about how much he loves throwing people out of the Moon Door. He wants to add one  to Sansa’s snow castle and proceeds to ruin it. I guess he doesn’t understand that if there is a Moon Door and the castle is on the ground it won’t really be effective.  He argues with Sansa and she slaps him. Little Finger shows up with a voice that has now inexplicably morphed from Christian Bale’s Batman to something closer to Tom Hardy’s Bane. He tells Sansa he killed Joffrey to avenge her mother and then plants a big smooch on her. Aww no he didn’t! But he did.

Lysa Arryn of course saw this because crazy people on “Game of Thrones” always witness things that make them act crazier. She summons Sansa and yells at her while pushing her head toward the open Moon Door. Little Finger arrives and pleads for Lysa to release her. He promises he’ll send Sansa away. Lysa relents and let’s her go. Then Little Finger walks toward Lysa all romantic like telling her that he’s only ever loved one woman. She smiles because she can’t connect the dots like us viewers can. That woman is Catelyn and that thought is the last thing Lysa hears before Petyr Baelish pushes her through the Moon Door.

And that’s curtains on season four episode seven of “Game of Thrones.” We saw so much! Arya kills again, Oberyn + Tyrion = Awesome, and the aass of Daario Naharis (because we love unneeded double a’s.) The “Game of Thrones” bunch is off this week for Memorial Day, so no new episode. But we’ll be back in two weeks with the episode titled, “The Viper and the Mountain.” I can’t wait. If you’re looking for me I’ll be standing in front of the mirror quoting the Red Viper. “Thee Lennisters er not the only wones who pay ther debts.” (I write in my Dornish accent.)

AOL: A Champion of the Internet