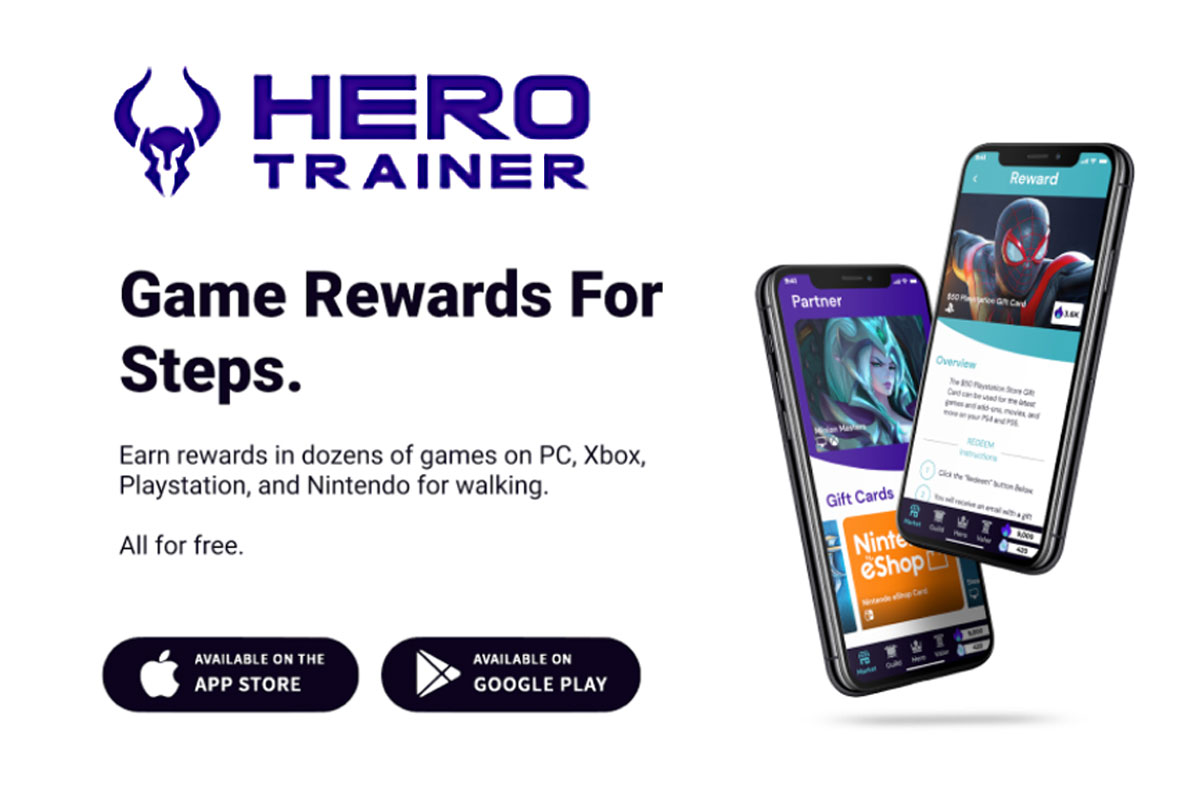 January 6, 2021 – Hero Trainer is a free mobile app on iOS and Android where users can earn rewards in dozens of games on all major consoles just for collecting steps. The app counts steps and translates into AURA, the direct rewards for gamers. The ultimate goal is to encourage bigger health and lifestyle changes by syncing with Google Fit or Apple Health. The AURA points earn rewards in dozens of games on PC, Xbox, Playstation and Nintendo for walking – and it’s all for free.

Since launching in April, users have walked over 800 million steps, with one person losing 30 lbs. in two months. People who monitor their steps generally commit to improving their health and making lifestyle changes. Hero Trainer kickstarts this process and incentivizes exercise. Additionally, a chat feature allows people to communicate with one another, giving gamers an opportunity to group together and compete for rewards.

Hero Trainer’s mission is to help gamers get physically and mentally fit. They are motivated by tangible rewards that incentivizes gamers to stay active by incorporating regular steps into their day, whether it’s in the park, on the street, or running on a treadmill. Hero Trainer has already partnered with a game company, eSports organization, an NFL player, an eSports host, and even a non-profit for veterans’ mental health.

No other app offers gamers actual rewards for their commitment to physical activity. Online immersive worlds have helped gamers across the world escape the bleak reality of this year. But Hero Trainer is a new way to connect the real world with the digital, offering gaming rewards with long term physical benefits.

On January 18, 2021, our Geek Speak hosts, Matthew Harris and Meredith Loughran had an opportunity to sit down with Yash Jain to talk about Hero Trainer, how it works, the incentives for fitness, and the genesis story on developing this game rewards app.

The Geek Insider Podcast is broadcast across many of your favorite listening apps. We’re on iHeartRadio, Amazon Music, Pandora, Apple iTunes, and more.

Following Up With Yash Jain

M: You had mentioned collaborating with a charity. Can you tell Geek Insider a little bit more about it?

Jain: We have an official partnership with the Anchor Therapy Clinic – a non-profit that helps first responders and veterans with trauma & PTSD through mental therapy. We are currently working to get them on our platform to exchange your steps for a donation to the non-profit.  We are looking at adding other non-profits as well.

M: On your website, Hero Trainer users have logged in more than 800 million steps. Are you seeing exponential growth with user adoption after having reached that milestone?

Jain: Yes! Since our last discussion, we have gone up to 1 billion steps! The website will be updated soon. I may have to estimate a week ahead of time for its growth but it’s rapidly growing.

M: Is there anything in the pipeline that you can announce that might not have been covered during our Geek Speak?

M: How does the influencer program work?

Jain: It is a tiered pathway for people with 0 followers to become fully paid sponsored Hero Trainer influencers. The highest tier will involve people getting their own hand-drawn avatar in the app in which they’ll receive a percentage of the profits if users purchase the skin.

M: How will that work for people with zero followers? Most incentivized programs want big influencer numbers.

Jain: Our program prioritizes people who use the app, and not just people with a high follower count. We want to make sure people who talk the talk, actually walk the walk (pun intended), so our program requires users to hit a step amount before they can apply.

Since our announcement this week, it has spread like wild fire.

You can read more about the influencer program here.

M: Is there anything else you can share with our Geek Speak readers?

Jain: This has only been announced on my Discord channel but we will be releasing our integration with Fitbit very soon!