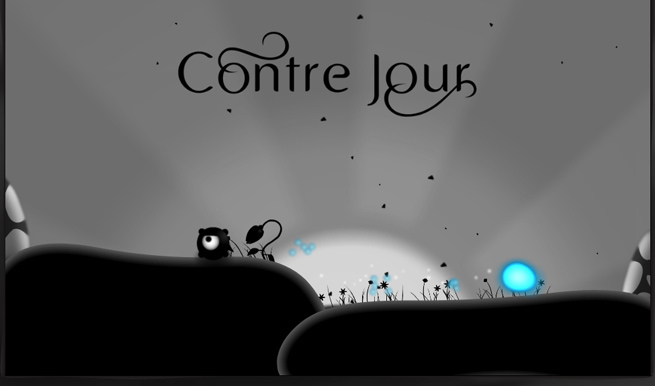 Contre-Jour (French for “Against Daylight”) is a photographic concept where a picture is taken directly into a source of light. The idea is that a stronger contrast between light and dark is created with a stronger emphasis on lines and shapes, creating silhouettes.  After having played the game, Contre Jour, I can see why this title was chosen.

Loosely based on Le Petit Prince (“The Little Prince”), Contre Jour is a puzzle game created by Ukrainian developer Mokus.  You are tasked with guiding a little blob named Petit through a hundred levels across five worlds.  However, you don’t actually control Petit at all.  The gameplay revolves around manipulating the surrounding environment, creating hills and valleys to allow Petit to reach a portal that leads to the next level.

Of course, it is never that simple.  Each world has its own unique obstacles that hinder you while escorting Petit.  Whether it is spiked ledges, blob-eating plants, or simply the emptiness beneath you, the environment does not do Petit any favors.  Luckily, there are also many unique tools that counteract these hazards.  Sticky rubber bands can launch Petit to previously inaccessible areas.  Mechanical pulleys and pendulums help guide Petit across large chasms and up tall cliffs.  There are even cannons and portals to launch and teleport Petit across the world.

All of these ideas coalesce into a very engaging puzzle game.  What starts off as a simple journey from one hill to another becomes a perilous trek through dangerous obstacle courses.  What makes the game even more challenging are the three balls of light that Petit can collect in each level.  It is never too difficult to reach the end portal, but doing so AND collecting the balls of light is quite a feat.

Now, I played this game on my little iPod Touch.  For the most part, it was easy to manipulate what I wanted and solve the puzzles accordingly.  However, some of the puzzles that required a more dexterous solution were more difficult on the small screen.  I knew what I needed to do, but the execution was a lot harder than expected.  This game is available on almost all mobile devices, but if you happen to have an iPad and would rather play games on that, I would imagine it would be much easier.

But no matter what you use to play the game, it is beautiful.  Petit is a cute little blob, and the surrounding environments pop using the aforementioned “Contre-Jour” technique.  The blacks, blues, and whites create an almost soothing piece of art that you get to explore.  Artist Mihai Tymoshenko designed all the artwork for the game, which he styled after black-and-white pictures.  He does a wonderful job of making each world similar enough that it fits into the overall game, but unique enough that it has its own identity.

The music, too, is unique to each world.  David Ari Leon composed a minimalistic soundtrack (with heavy emphasis on the piano) that fits well into Contre Jour.  I am a big fan of piano music myself, and you can even download the soundtrack if you enjoy the music and do not want to be eaten by a blob-eating plant for the hundredth time.

Contre Jour reminds me of titles such as Flower or Journey… a game that is perfect for unwinding after a hard day.  The gameplay is simple, yet challenging.  It is a beautiful game to play, and it is just as beautiful musically.  While not as story-driven as the previously mentioned games, it is still a wonderfully designed puzzle game… and aside from a few difficult puzzles, it is perfect for mobile devices.  I highly recommend this to anyone who wants to escape reality for awhile by immersing themselves in a piece of art.