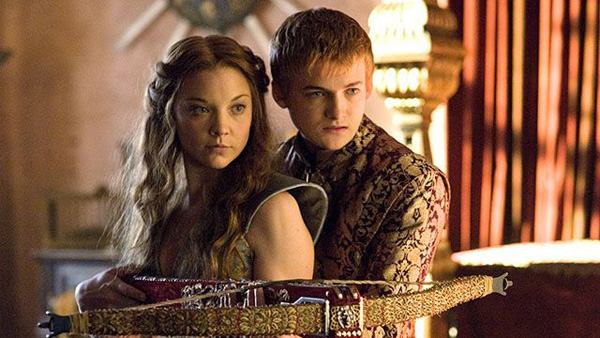 If you want to see the massive scope of HBO’s hit series “Game of Thrones” look no further than what amounted to a two week season premiere. In 120 commercial free minutes, longer than many feature length films, we now have a sense of the season’s storylines and where our characters are going. There’s no casual watching of “Game of Thrones” while you sit on your couch playing Angry Birds. If so, you’ll totally lose track of the hundreds (okay, maybe not that many) of characters.

Game of Thrones: Bonding Over Crossbows

Episode two is titled “Dark Wings, Dark Wings.” Awesome, that means we’ll get some dragon action! No, actually, Daenerys isn’t even in the episode. After featuring prominently in the premiere inquiring about buying an army that is so tough the current owner cuts off a soldier’s nipple (!) to prove it, she got duped by a warlock and needed saving by a lurking Sir Barristan Selmy, who pledged himself to her. Big stuff, so she got the second episode off.

But lucky for us, we do get some actual progress in the other storylines. In King’s Landing, Sansa practices her frowning skills while whining. She really has upped her game this season after whining in season one and pouting in season two, she’s been able to put it together in these first two episodes. What a pleasant girl. When invited to lunch with Margaery Tyrell and Lady Olenna, she spills the beans on Joffrey. Don’t be too impressed. She actually just said he was great in a whiny voice until finally cracking and saying “he’s a munsta.” Notice the British accent in my writing.

Tyrion meanders around not doing much, but on the other side of the castle, King Joffrey is getting some action… with his crossbow. He just holds it a lot, shoots things on the wall, and is generally very creepy about how much he likes it. Margaery comes in and shows why she is going to be the Tyrion of season three. She manipulates the conversation away from her dead ex, Renly, and toward a sexual innuendo filled love fest with, you guessed it, the crossbow.

One of the characters we didn’t see in the premiere was Theon Greyjoy. I did wonder what happened to him after he got knocked out by his own men after the bumbling siege of Winterfell. Well it turns out he’s being tortured. Why? Don’t know. Where? Don’t know. By who? Don’t know. This storyline? Don’t care.

Also left out in episode one, Arya and Bran’s separate wanderings gain a bit of steam. Arya and her companions are found by the “Brotherhood without Banners” who makes fun of Hot Pie for being fat and then buys them food. But as they let the young escapees go, that was too easy, we get some drama. In this giant continent of Westeros, who happens to be captured and brought in front of the Brotherhood at this exact moment? Well, it happens to be one of the 10 or so people who would recognize who Arya is, the Hound. He must have used the “Find Friends” app on his iPhone.

Bran and his crew are tracked down by two new characters, Jojen and Meera Reed. Jojen tells Bran that Bran can see through the eyes of animals. We kind of already knew that. The group keeps wandering, similar to Brienne and the shackled Jamie Lannister heading south. He breaks free, they fight, and they both get caught by Robb Stark’s banner men. The most memorable moment of the scene is Lannister joking that Renly, Brienne’s old crush, would have preferred a throne made of phalluses instead of swords. I guess that’s the Westeros equivalent of schoolyard humor. The King Slayer then goes on to steal her juice box and jump off the see saw while she is still on the other side in the air. Tales were tattled.

Nothing terribly important happens beyond The Wall. Sam is scared and Jon Snow is pretending to be a cool wildling. But we do get a great bit of information on Jon from Catelyn Stark while shackled by her son Robb for setting Jamie Lannister free with Brienne. It turns out that when Jon was a baby she hated him for being Ned’s bastard and wished he would die. But then when he got really sick, she prayed for him saying she’d treat him right. Well guess what, she didn’t. So now she blames herself for all the bad stuff that has happened to her family. I don’t know about that, but I do blame her for Sansa’s whining because it’s pretty clear Catelyn is where she gets it from. Buck up lady, you’re a Stark and “winter is coming.”

So we’ve gone full circle, whining to whining. Overall, it’s a solid episode with a lot of great visuals and some intriguing plot developments. With the number of characters we have, it’s very likely this season will pass even quicker than the previous two. But the constant feeling of impending doom is definitely keeping my attention.