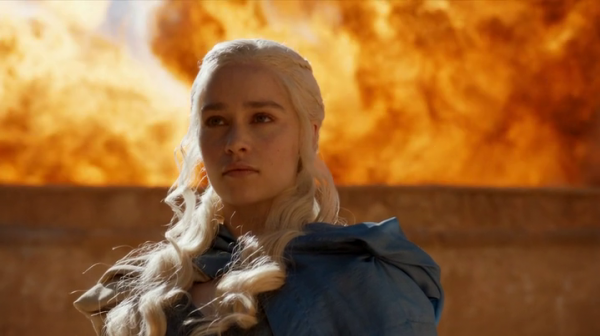 Game of Thrones appropriately holds the reputation of killing off main characters. Since season one saw a very important player relieved of his head, I guess that makes sense. Well we got a taste of that with season three’s fourth episode, an chapter that seems like nothing happened until you really consider all the stuff that goes down.

King’s Landing is on full display this week led by Lord Varys, who seems to be aparating all over town in order to have conversations with every character we know there. You remember Lord Varys. He hasn’t really done anything yet this season. But he’s the one with the baldhead, flowy robes and is commonly mocked for his lacking nether regions. First he talks to Tyrion about the imp’s close call during the big battle last season and then tells the story of how he became a eunuch. Guess what, the weird sorcerer who did it to him happens to be in a big crate right there in the room. It’s weird what shows up in the mail sometimes. Varys later talks to Ros and Lady Olenna separately about Sansa and Little Finger. I dare say the Varys- Little Finger feud could be coming to a head soon.

Lady Margaery continues to spread her influence by convincing Joffrey to wave to the public to gain their favor. He waves like he just discovered he has hands. This annoys Cersei because waving is for poor people? Margaery later tells Sansa that they should be friends and she should marry her brother Ser Loras. Um, we already know that Loras wouldn’t be too keen on that. Plus who would want to marry Sansa? She would just whine that the flowers smell too much in Highgarden.

Beyond the Wall, things go off the wall. The Night’s Watch is still chilling at Craster’s Keep. When I say chilling, I mean ridiculed endlessly as they starve and get inexplicably dirtier by the minute. After holding a funeral for a fallen brother, one of the Crows reaches his limit and confronts Craster. Who is this challenger stirring the pot? Well we haven’t really seen much of him before. His name… Karl. That’s right. In the show with characters named Daenerys, Tyrion and Samwell, this guy’s name is Karl. Well don’t underestimate dull named Karl because he stabs Craster in the throat.

As throat stabbings have been known to do, it causes a big brawl. Rast, who has been a jerk since season one, then stabs Lord Commander Mormont in the back. The Old Bear gets really angry about this. But right when you think he may be okay, he has the dreaded coughing up of blood. That’s the television equivalent of putting X’s over their eyes. He dies. Sam flees the Keep with Gilly and her baby to escape the mayhem.

Before we get to Daenerys’ season four coming out party, let’s cover all the storylines that don’t matter. Bran has another dream where he recalls a scene from season one because apparently that’s as far back as he can remember. Arya is brought to the hideout of the Brotherhood without Banners. Once there, Beric Dondarrion announces he will fight The Hound in a trial by combat. Brienne yells at Jamie for giving up just because his nasty severed hand is hanging around his neck. Now the moment you’ve been waiting for. After Theon Greyjoy admits he made a mistake and the Starks are his real family, it turns out the guy who freed him has recaptured him and brought him back to the torture chamber. This is by far the most redundant, unnecessary storyline in Game of Thrones history.

Much more entertaining is Daenerys who shows up to make her trade, one dragon for the huge slave army. Throughout the preceding episodes, Kraznys the slaver had been insulting the mother of dragons in a seemingly foreign language. But it turns out she understood him the whole time. Cue epic badass speech. Dany orders her dragon to barbecue the slaver and tells her new army to kill all the oppressors. They do so during a scene of grand explosions and bloody conflict. She then tells the army they are now free and only have to fight for her if they want to. It seems they do. So now we’re rolling.

Guys in crates, learning how to wave, a guy named Karl and dragon barbecue. Now that’s an exciting episode. It’s what we’ve come to expect from Game of Thrones.