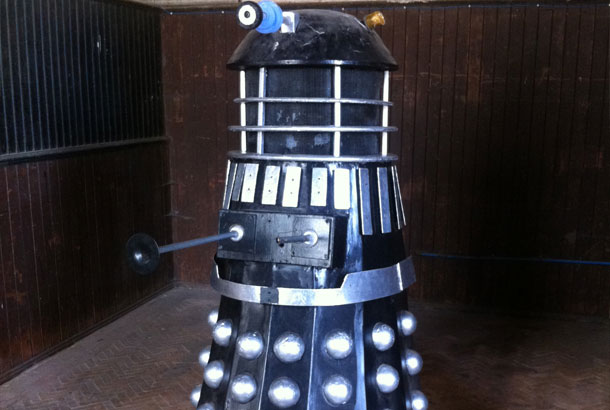 I’ve been doing a little bit of sightseeing in the beautiful countryside of Wales; an oft-overlooked, much-mocked country (think New Zealand to Australia or Canada to the US) . But it actually has some amazing landscapes, and a fantastic history to boot. The BBC certainly think so too, and it is in a grand country manor that I find some artifacts from the international phenomenon that is Doctor Who. 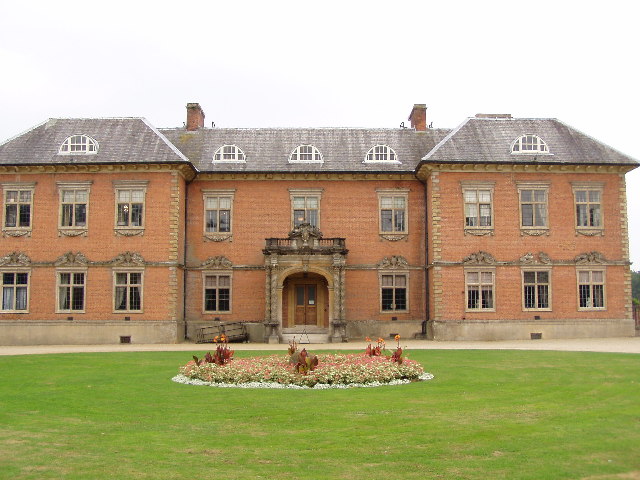 Doctor Who In The Welsh Countryside

Tredegar House is an enormous property just outside of the city of Newport (the unassuming birthplace of Michael Sheen among others), under the protection of the National Trust in the UK. From a glance around its grounds, it’s a striking manor with some unusual aesthetics; the location of the front door has changed more than the British landscape around it. Initially built during the time of Charles I, it was described as the “grandest and most exuberant house country house” of the period. The royal connection was not severed along with Charles’ head, however, and the main dynasty to own it, the Morgans (relatives of famed pirate/privateer Henry ‘Captain Morgan’ Morgan) were in favour with the later Tudor monarchy, allowing the house to flourish.

The last Morgan to own it, John, was extravagant enough that it would take an entire article to describe him. In brief, he practiced black magic in the cellars, owned a menagerie of animals – including a crocodile in the bathroom and a gorilla that roamed the grounds, had a glamorous femme-fetale Russian wife, and was a closeted homosexual who became an key advisor to the Pope (with the extravagant robes and all).

But you’re not reading this for a history lesson.

But Tradegar House also happens to be the site of many an episode of Doctor Who (re-used from several angles, and with enough rooms to provide all sorts of different-flavoured locations). My first clue as I wandered through, was sight of Dalek incongruously resting in a stable that was supposed to be locked to the public. It’s not often that you see alien death robots in storage, so my interest was peaked. Much to the chagrin of my companions, I had managed to turn even the most cultured of days out into a nerdy scavenger-hunt. 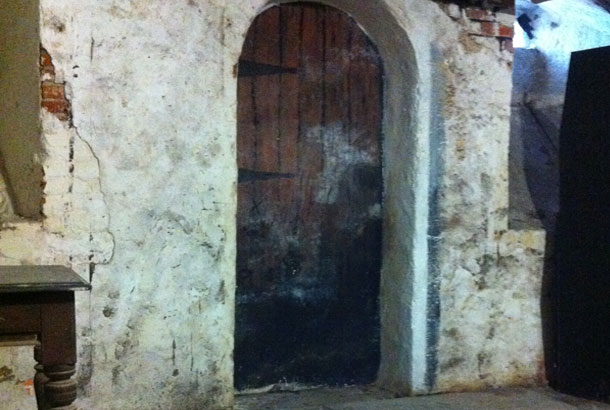 A tour of the vast cellars provided more answers. The BBC has dropped in and out of the house to film many shows (more than could be listed on two hands), but mostly Doctor Who. “That’s a ‘BBC door'”, the tour guide noted, indicating a dark, wooden frame set against the wall. “It’s painted on, it’s not real. It’s was in the background while David Tennant was down here.” We walk past more wine vaults, stopping to note the half-Dalek shell in the corner, behind a load of chipboard sets and sound stages which have all been left behind – for now.

We pass into another room, full of shards of pottery, old statues, statuettes, and an impressively phallic fish carving. The staff are unsure what this particular room in the cellar was for, possibly for overly drunk servants to sleep off any particular heavy nights. The door to this room looks suspiciously new and un-weathered, compared with all the others. “John Barrowman broke that door,” she declares. “He was filming a scene for Torchwood where he had to come through it, and he got a bit over-excited.” She wrinkles her nose, “It’s okay, it was only three hundred years old”.

Tredegar House, and the countless other houses like it, reminded me that the UK has some great locations for filming. In fact, in terms of historicity, this country pretty much has everything a budding Director of Photography needs to get started. Need to film some Game of Thrones-ey bleak, wet countryside? Hop over to Ireland. Need some smokey, steampunk industrialism? Edinburgh’s for you. London is so varied (from cobbled-centuries old streets to skyscrapers) it fits like a glove for most things.

My own home town, Bath, has a streak of Georgian-era architecture – so it gets used for all the Jane Austen movie adaptations (including a period Bollywood dance-fest which I tried to be an extra for). In fact, even purportedly American affairs cheat and come over here; most of the filming for the forthcoming Vampire Academy took place in a manor outside of Southampton (don’t ask me how I know that). Ah, the magic of cinema.