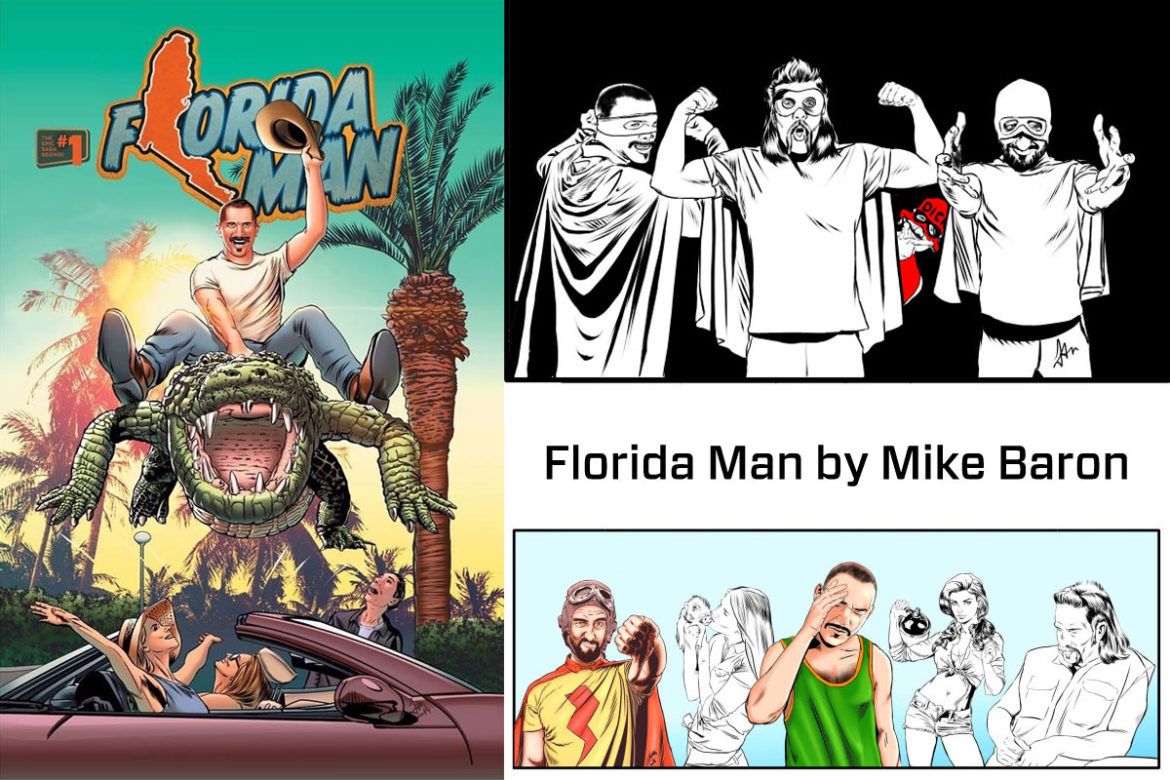 As if Florida Man itself wasn’t absurdly funny by nature of being notoriously strange and unusual, downright ridiculous or blatantly outrageous, Eisner winning writer Mike Baron and artist, Todd Mulrooney has adapted one of Baron’s best-selling books into a graphic novel.

Baron has authored comic books for the Marvel and DC universe that include The Flash, Punisher, and Star Wars, but Nexus is Mike’s ground-breaking science fiction indie comic which earned him two Eisner Awards and an Inkpot. Nexus was co-created with illustrator Steve Rude and is published in five different languages.

And now for something completely NOT Nexus…

Available exclusively through Indiegogo, Florida Man Volume 1 is 56 pages of the bizarre adventures of Gary Duba having a bad day. Well, judging from the cover, no one’s jumping the shark here. They’re jumping the gators in this wild, redneck, swamp-loving tale.

Of course Gary’s got dreams! But someone has to take care of the snake in his toilet, a rabid raccoon, and his gal Krystal, who’s sitting in jail for licking the manager at Waffle Castle.

In addition to Mike Baron, the creative team behind Florida Man the graphic novel is Todd Mulrooney who is the main illustrator for the book. Todd is also an accomplished freelance comic book creator. He was part of the creative team behind Graveyard Shift Volume 2, a supplemental comic, plus his own creation ‘Ignition‘. Mulrooney’s artwork appears on the cover of Narcopolis: Continuum from Heavy Metal magazine.

Ichsan Ansori handles the interior colors for Florida Man. An Indonesia native, Ansori attended the National Institute of Technology, Art and Design in Indonesia and he has a Master’s in Digital Coloring.

Chris Braly handles editing and marketing. With 20 years of experience in media and video production, Chris has been busy with producing content. He is also the Managing Editor of Bleeding Fool, a popular geek culture internet journal.

Where to Find the Book

As mentioned earlier, Florida Man Volume 1 is exclusively available on Indiegogo and it is being published as a premium square-bound book, using the best paper quality, and the best possible cover stock to ensure a rigid, solidly crafted physical copy.

Of course you don’t have to be a Florida resident to enjoy this book because you all know that Florida Man stories are second only to the Darwin Awards. Most of the time these fools live… most of the time. But this book has female wrestlers who will undoubtedly kick your tail from here to Sunday.

Mike Baron and his merry band of Florida Man co-creators want to get this out to as many people as possible so help spread the word.