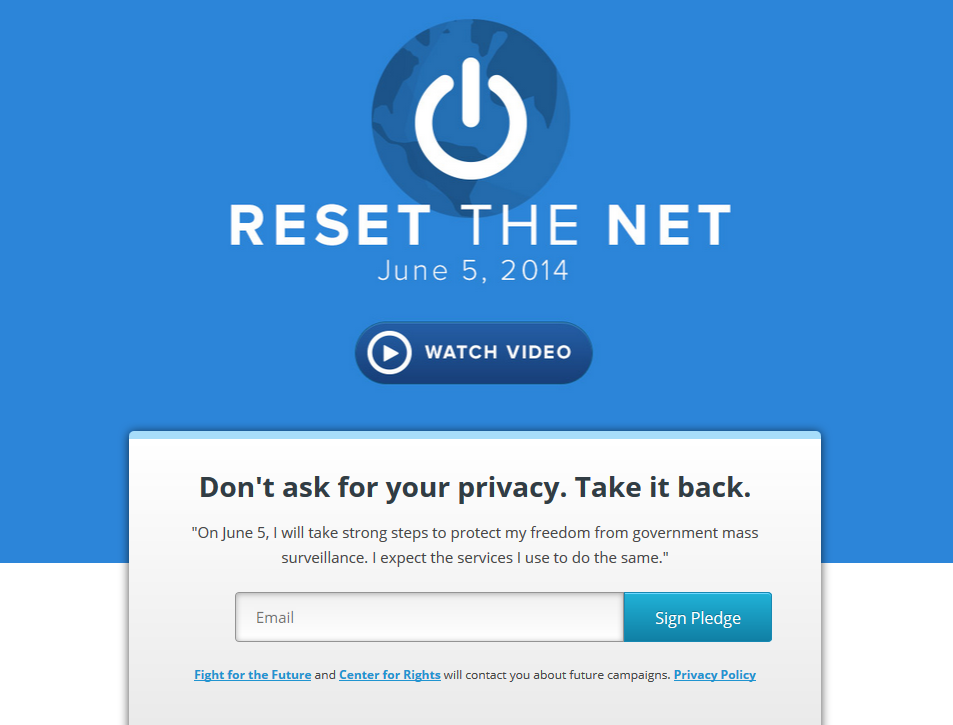 Protesting is not enough when it comes to the NSA and government surveillance. At least, this is the opinion of a new movement conglomerated from over twenty technology companies and civil rights organizations. Fight for the Future is an organization clamoring to reinforce internet privacy by calling for an event they call Reset the Net, scheduled for June 5th, the anniversary of Edward Snowden’s NSA leak.

This movement, which is backed by organizations such as Reddit, Greenpeace, the Open Technology Institute and the Libertarian party, is calling for everyone who is involved with the internet to up their privacy efforts. Their promotional video claims that “Government spies have a weakness: they can hack anybody, but they can’t hack everybody.” In the same way that organizations fought the SOPA and PIPA legislation in 2012, Reset the Net is designed to lash back at the NSA. By signing up for their mailing list, Rest the Net claims that you are taking he pledge: “I am committed to an open web that that protects my freedoms from government mass surveillance. I expect the services I use to do the same and secure their part of the web.”

What Web Developers Can Do

On the day of or before Reset the Net, Fight for the Future wants anyone who develops websites and other online services to increase their number of security features. Specifically, the movement asks the web developers incorporate the security of encryption protocol such as Secure Socket Layer (more commonly known as SSL), add security features like SSL and HTTP Strict Transport Security (also better known as HSTS). These simple efforts can help eliminate the government’s spying ability.

What Typical Internet Users Can Do

Reset the Net is distributing an information packet to anyone who signs up to fight for a more secure internet. This privacy packet contains not just information, but a bundle of free software tools for all kinds of technology services. For safer, ecrypted, phone conversations, it offers Textsecure and Redphone. For users who want encrypted chatting, it contains Adium and Pidgin. For those who want encrypted email, it contains GPG. However, the most powerful thing typical internet users can do on Reset the Net day is to raise awareness. By resetting backgrounds and splash screens on apps, websites, and social media outlets to advertise Reset the Net, you can help the movement can grow, and less and less information will be available to the NSA’s surveillance.