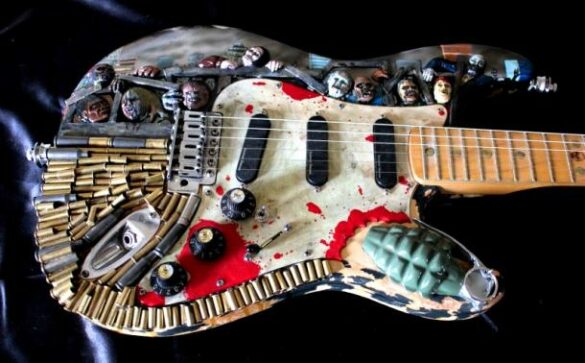 When it comes to Zombies, we here at Geek just can’t get enough. Whether we are recapping the latest ‘Walking Dead’ episode, dying to purchase Zombie themed cookie jars, or what have you…we love zombies. Of course, when we saw this incredible zombie-themed work of art which also doubles as a fully-functional guitar, we were dying (no pun intended) to check it out! 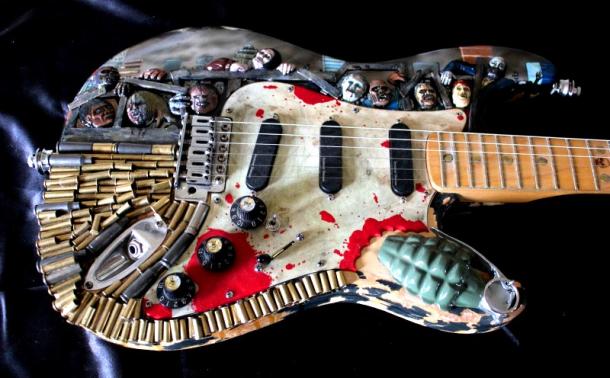 Zombies: Music to Your Ears

Guitar-modder, Travis Stevens, has taken his passion for the undead to a whole new level. Pictured above is his latest project, a modified Fender Stratocaster, is an incredibly detailed tribute to the undead that is really an amazing work of art. As you can see, although the guitar has been completely revamped and turned into a masterpiece, it still resembles the Stratocasters that we are used to seeing.

The main face of the guitar is a blood-spattered plate surrounded by a vast array of zombie decor. At the top of the photo, you will notice the extraordinarily detailed zombies who are clawing and fighting their way through a barricade, surely trying to stagger toward you and eat your brains. At the bottom of the photo, Stevens has used real bullet-casings to outline the bottom half of the guitar, followed by an artificial grenade on the fin of the Strat, complete with pin.

As you move up the neck of the guitar (and out of the photo), the traditional fret markers are replaces with more inlaid brass bullet casings, as well as a few skulls for good measure. The headstock is charred and looks as though it should still be smoking . It sports a creepy “Zombies” logo in yellow, stylized writing. 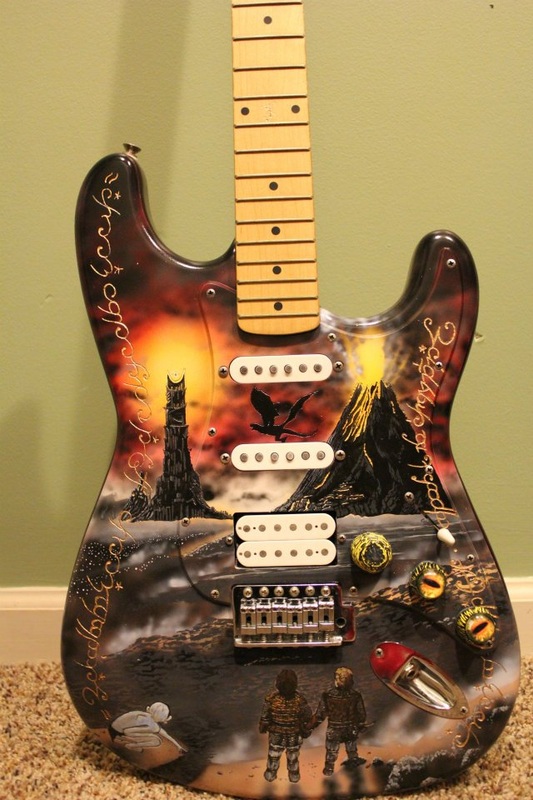 One does not simply rock into Mordor…

This amazing undead-art is not the only guitar modification that Stevens has done. He has also completed an amazing LOTR axe that is absolutely incredible (Can you tell I am geeking out here? The volume knob is SAURON’S EYE!), as well as a vast array of other themes (think Han Solo, Boba Fett, and Lite Brite). His talents obviously know no bounds and are really paying off for Travis on sites like eBay, where his work sells for upwards of 600-700 dollars per piece. You can check out Steven’s entire gallery here and even bid on his guitars!