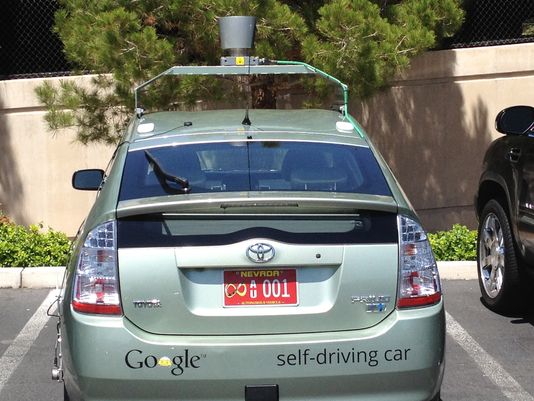 “We want to stay ahead on this issue.”, said David Friedman, deputy administrator at the National Highway Traffic Safety Administration. The NHTSA statement also states that “America at a historic turning point for automatic travel.”  It also announced a four-year long study to prepare for regulation and recommendations for state laws.  NHTSA also recommends that states issue separate driver licenses for those who wish to operate these vehicles.  These would only be issued once the driver has completed a training course.

So where are the automated cars? They are being tested only in the states that permit them. Those include: California, Nevada and Florida.  Expect fast change, says Google CEO and co-founder Sergey Brin.  “You can count on one hand the number of years until ordinary people can experience this, “he said last September when California Governor Jerry Brown signed a law allowing self-driving vehicles. Google has vehicles that use radar, lasers, cameras and computers that allow self-driving vehicles to go from point A to point B without any injuries.

The NHTSA has determined levels of vehicle automation that range from 0 to 4.

Level 0 is the vehicle you are driving now. You are the only thing responsible for all functions.

Level 1 is when a vehicle’s computer-oriented system can assist during an emergency. Features that would fall under this level would be electronic stability control and automatic breaking.

Level 2 is like “active cruise control”, where the car could take over non-emergency tasks such as maintaining speed and keeping a safe distance.

Level 3 would be where a driver is expected to be seated at the controls and take over driving at times.  Google’s self-driving car would fall under this category. This car is the most automated so far.

Level 4 is the most advanced category. In a level 4 vehicle, a driver would only put in a desired destination. The driver would not be expected to take a role in driving at any time.

The NHTSA has also recommended that states require automakers to share information about incidents and crashes.  Their top priority is to ensure the vehicles and their occupants are safe.

Besides Google, major automakers such as General Motors, Toyota and Audi are researching these vehicles.

The National Highway Traffic Safety Administration also has been involved in “vehicle to vehicle” communications research. These systems would allow vehicles to send data to one another using radio signals.  With these systems vehicles can be warned of impending movements by other vehicles and possible hazards.

Human error is the cause of most auto accidents. Having self-driving cars on the road could have the potential to save many lives.

So are you ready to ride in a self-operating vehicle?  The organization that represents big U.S. auto makers says a new poll indicates many U.S. consumers are wary about sharing the road with vehicles that could be hacked by mischief makers.  42% of those polled said that the automated cars were a bad idea, while 33% said they thought the technology was a good idea. About 24% of the 2,000 adults surveyed said they didn’t know what to think about cars that can drive themselves on the highway. (White, blogs.wsj.com)

A worry that arose from the survey was privacy. About 75% of the people who responded said they were concerned that companies would use the software to collect personal data, and 70% were worried that the information would be shared with government agencies. About 40% of the people said they didn’t believe automated cars could improve safety. Another 16% say they weren’t even sure why self-driving vehicles were important.

Although there are a lot of varying views on this topic, one thing is for sure. With the NHTSA implementing recommendations, suggesting state laws and engaging in a four year study, it means that we are definitely moving towards more automated vehicles in the future.

Christine Messere is a Virginia-based freelance writer and small business owner.
Her passion is writing, earning a degree in Photojournalism. She enjoys writing articles, reviews,poetry and short stories. Her interests in technology include online gaming, social networks and the latest in gadgets In her spare time, she likes to spend time with family and friends.