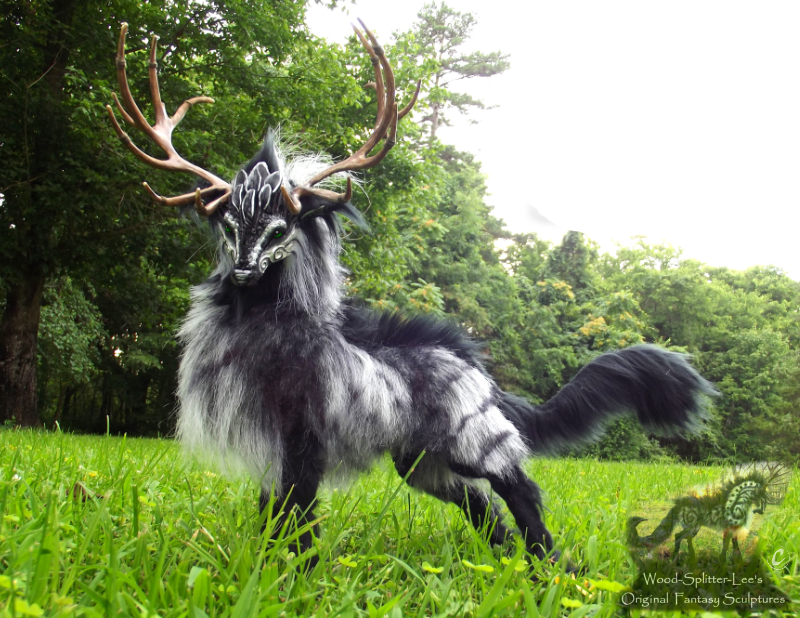 Geek Insider recently had the unique opportunity to interview Wood-Splitter Lee, an artist who originally hails from Alaska. Why is her art so unique? She hand creates fantasy creatures like you’ve never seen before. Fire Foxes, Baby Unicorns and Moon Dust Wolves grace her Deviant Art profile page. Check out what she had to say to us in our exclusive interview: 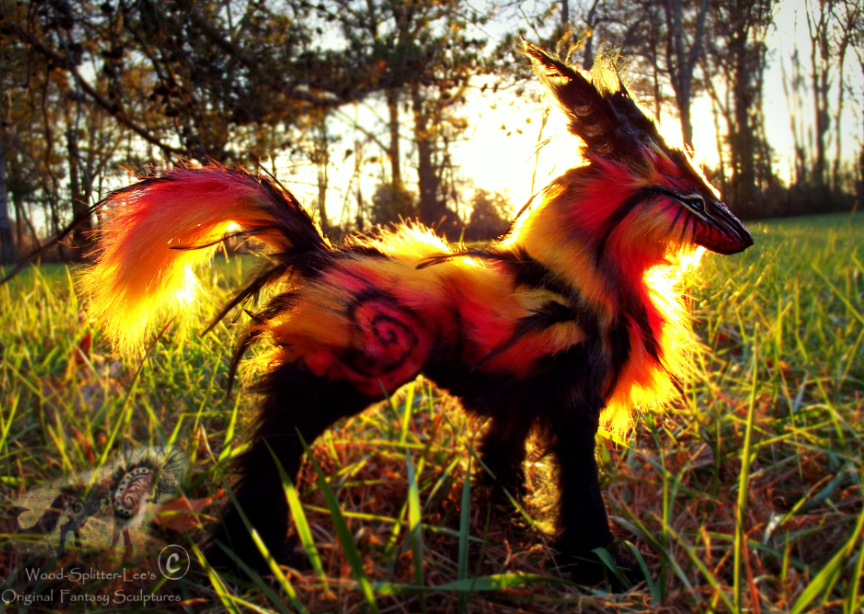 T. Tarbet: Tell me a little about yourself. How did you get into building these awesome creations?

Wood Splitter Lee: Well, since I was born and raised in Alaska, we were out in the middle of the woods, and we had swans on our lake that I would call and they were so used to me being around them that they would let me pet them. I also had an eagle’s nest right outside my window. I saw animals every day. Bears. Moose. I wanted to create and sculpt what I was seeing, so I did. I sculpted my first sculpture when I was thirteen, and, shockingly, won the Best of Show in an art show, and that was quite an honor because it was my first. From there I decided that I didn’t want to make just regular sculptures that you couldn’t do anything with, sculptures you could only look at, so I combined fur and stuffing and posable skeletons and I made synthetic fur and I started making animals and creatures that were posable and you could do things with them instead of just looking at them, and I put weights inside them so when you pick them up they feel real. So I just strive for original and unique and just as realistic as I possibly can, so that’s really how it started.

T: So, you would say that your inspiration comes from nature and from all that?

WSL: From the animals. I like to enhance the features that make a certain animal beautiful or cute. It could be their eyes, their bone structure. So I’m completely self taught, and I just like to bring things to life.

T: So, why fantasy creatures, then? T: That reminds me of the book that you’ve written. Is that connected with your figures?

WSL: It is actually. I started writing the book when I was fourteen, and it took seven years. How I illustrated the story was I would sculpt the creatures and characters, and then photograph them, and then the photographs then become the illustrations of the story just from the sculptures that I was making.

T: That’s a really interesting way to intertwine your work and your writing. Would you tell me a little bit about your book?

WSL: It’s fantasy adventure. It’s about a young man who lives in a world underground and it’s forbidden for them to go the above world, which is where they were from originally. But something happened and they all had to move underground. So this young man ventures up to the above world because something happened down there and he had to leave, and he finds this very fanciful and dangerous world and he has all sorts of adventures with fantasy creatures. It’s a very adventurous story.

T: Is that book only available through your eBay store, or are you publishing it through other means as well?

WSL: At this time it’s through eBay only.

T: Ok. Moving back to your fantasy creatures, how long does it typically take you to create one of your creatures?

WSL: When I first started it took weeks and weeks, just because they’re all 100% hand made. Now that I’ve made over 400 creatures it’s become muscle memory. It doesn’t take quite as long, but it still takes quite a while.

WSL: If I had them all now, I’d have them everywhere. 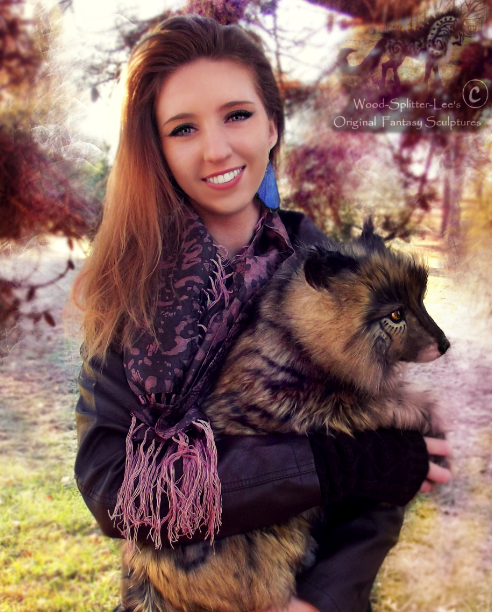 T: I’m sure you would. How long do your creatures last? How durable are they?

WSL: Well, they’re pieces of artwork. They aren’t toys. They will last forever if you don’t drop them on the floor.

T: That’s an excellent way of putting it. I saw on your Facebook page that you recently got to go to Korea.

WSL: Oh, yes! I was invited to WETA Workshop in New Zealand. Since they invite me back every year and I work on personal projects with them, Richard Taylor, the owner of WETA Workshops, invited me to come to Korea with him. So I went to Korea with the Workshop and with Richard and I exhibited many of my personal works in Korea, and that went really well. Korea, specifically, invited me to come back next year, so that’s pretty exciting.

T: That’s really impressive. So, you have plans to go back, then?

WSL: October, actually, and I’ve also been invited to China, so that’s also next. 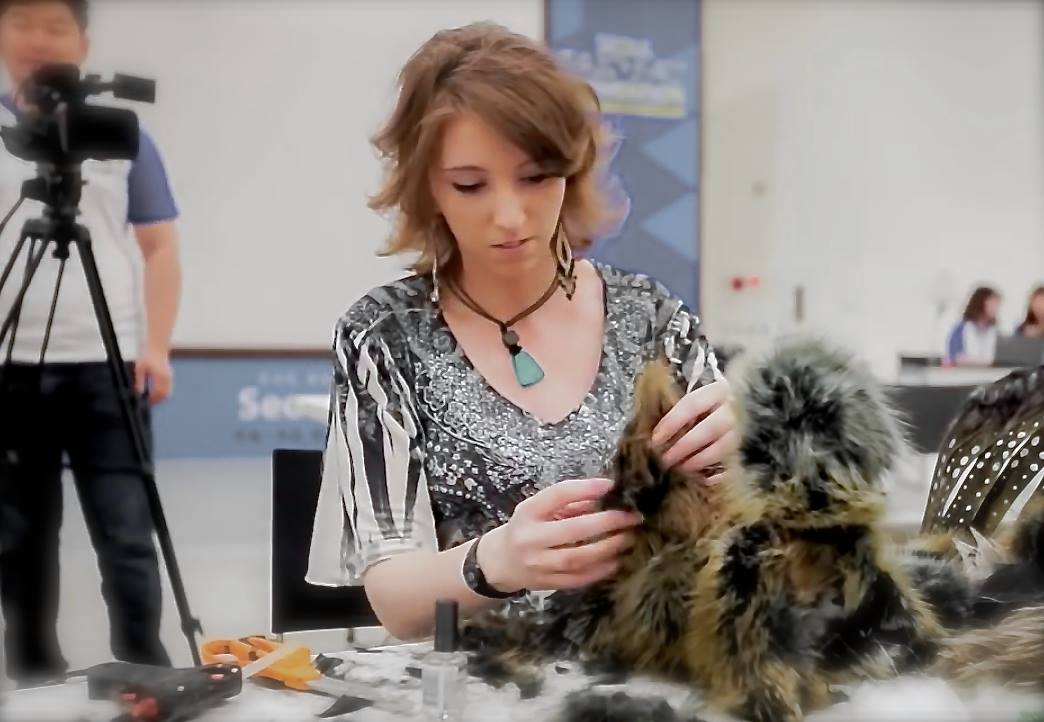 T: So do you have any favorite creatures that you’ve worked on?

WSL: I have a slight obsession with lambs and baby pandas. So they’re probably my favorites. And the stags, of course. I love regal and powerful looking things.

T: You capture that very well. I looked at some of your stags and and they are very majestic looking creatures.

T: Other than your sculpting and your writing, do you do any other kind of art?

WSL: I’ve actually tried every art form there is, but sculpture, holding something physical in my hands really calls me more. It’s really like holding your imagination in your hands.

T: Cool. So you’re going to stick with the posable figures, then.

WSL: I’m actually moving more towards life sized puppet creatures. I’ve taught myself how to make blinking puppets. I’m not sure if you’ve come across any of those. That’s what I did in Korea, a blinking puppet. So I plan to do more life size puppets.

T: No, I don’t think I’ve ever come across a blinking puppet. That would be a sight to see. One last question. Why the name “Wood Splitter?” What’s the story behind that?

WSL: When I was thirteen years old, since we lived in Alaska, my dad would go gather and split wood all the time. He made it look so fun, so one day I went up to him and said, “I want to split wood, too, dad.” So he looks at me. I’m this weedy little thing that doesn’t even weigh a hundred pounds yet, and he says to me, “Lee, this is an eight pound maul. You can’t even lift it.” But I tried anyway. I would miss or hit it like a girl, but I didn’t give up and I kept doing it, and in a couple of weeks I was splitting more than he was. I would actually get calls from people wanting me to come split their wood. So it was a name that I was given, “Splitter Lee,” because I was just this teeny little thing, but they said I could split wood like a man, so it just kind of stuck.

Game of Thrones Fans Can Now Learn Dothraki, Khal-Status And Horse Not Included