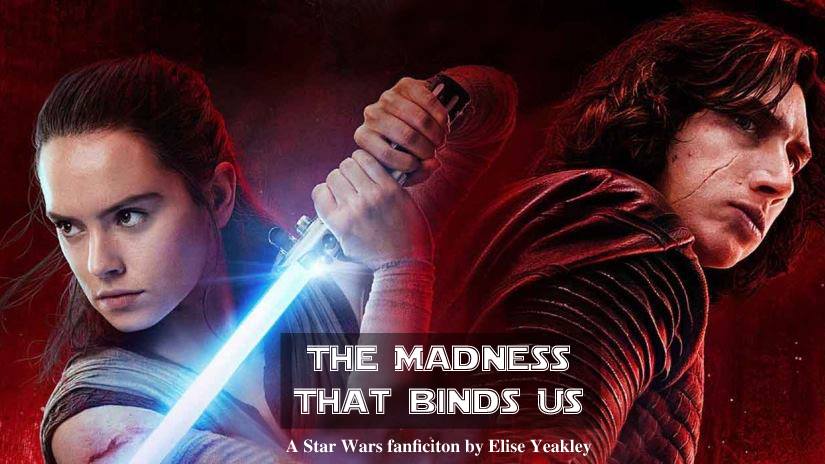 His fingers close around mine. My heart leaps as he tugs me closer to him. Wrapping me in an eager embrace, I can feel him trembling against me, his eyes letting out the tears he’s been holding back.

This isn’t a good time to tell him that it isn’t what he thinks. I don’t want to destroy everyone. Why would he think I’d be okay with that? No. I don’t want this. I just want him. I know there is good in him, but he still doesn’t understand how this whole thing will work. He doesn’t understand how there isn’t just the Light and Dark sides and that them dissolving doesn’t change anything. The sides are about hearts, minds, and intents. They are about motives and beliefs. They don’t have to exist the way they are now–we don’t have to have them at all–but we can’t stand by while his former people destroy mine. That’s just as dark as being on the Dark Side itself.

My arms are looped underneath his arms and twirled around his back. His shuddering body is slowing down, his breathing returning to normal.

I have to tell him.

“Ben,” I say softly, my hands patting his back. “Ben, I have to tell you something.” Ben jolts back, afraid. Fear of betrayal and caution are evident in his seeking eyes. “I do want to join you. I want there to be a galaxy without a Light Side and a Dark Side. I would love to rule the galaxy with you. Really, I’d love to just be anywhere with you. I don’t care what we are doing. As long as we are doing good. We can’t allow innocent people to suffer simply because we do not share their beliefs.” Ben pulls away and spins around. He’s rubbing his face, either angrily or nervously. I can’t tell what he’s feeling right now.

“Ben, I know you have only known a life of betrayal, death, and darkness for so long. But…I know you have light in you that is bursting to get out. You killed Snoke! You saved me! You want a galaxy without the Dark. Don’t you see? You want the same thing as me. You just need to realize that we can’t just allow good people to die.”

“No.” Ben spins around and looks at me with blood-shot eyes and twisting lips. “You don’t understand. They’ll kill me, Rey. They’ll kill me. They won’t trust me. They are the same as Skywalker. They will finish what he wanted to do.”

“No, Ben. No. Please, Ben, listen to me,” I race over and throw my arms around his neck. I expect him to tense up because of the whirlpool of emotions and scarred memories he’s likely fighting within himself right now, but he doesn’t. He welcomes me in wholeheartedly. Lifting onto the tips of my toes, I plant a kiss on his cheek, and then my hands gently glide to either side of his face. I look at him, he looks at me. For a moment, we are the only ones in this entire galaxy. We are speaking through our minds. We feel each other’s desires and reservations–fears and dreams. I close my eyes, kiss his mouth, and then look at him again.

“Listen to me,” I whisper firmly, our eye contact not breaking for a moment, “We can rule without hurting anybody. You hear me? We can be leaders of people who choose our way: a way between Jedi and Darkness. A middle, peaceful place where the fighting stops. But in order to create that galaxy, we must first show the galaxy we can emulate it and follow through no matter the circumstances. We will only defend ourselves with arms. We won’t go into the stars and destroy anyone. Ever. You hear me?” He looks at me, studying me, sheepishly staring down at me like a reprimanded schoolboy. “And we will never let innocent people die.”

Ben’s eyes are so dark, but behind them is a beaming light–a light that has been cowering since boyhood because it wasn’t believed to be there.

I can see it. Again. His future. Bright and beaming. He is capable of great things. He just needs people to believe in him.

“We will go to my people. We will save them. I will tell them your bright future and that you stand with me. They will believe in you, Ben. And if any of them have a problem with that, they will have to take it up with me.” My voice got fiery at the end, my teeth nearly clenched as I thought of anyone hurting Ben. He’s only known abandonment. He will know love. I will show him love, and the others will follow.

Ben grabs me and pulls me into him, his lips devouring mine. His mouth is a decadent treat that I readily receive. My lips spring to life at the taste of him. I melt at his touch and my legs wobble and fall. Ben catches me with one swift movement of his arm. Our mouths part and we are left suspended in time, caught in each other’s gaze. Everything we feel is rushing in, out, and around the two of us. The force amplifies the way he causes my blood to race and my passion to burrow through my veins. I can feel him too. I feel it all, and I want to burst into the darkest space of the universe and create a lightning storm of color. He and I could do anything with this power held between us. This beautiful symphony of potential.

Our minds stay connected as we remain lost together, our hearts beating as one.

It’s time for this war to end.