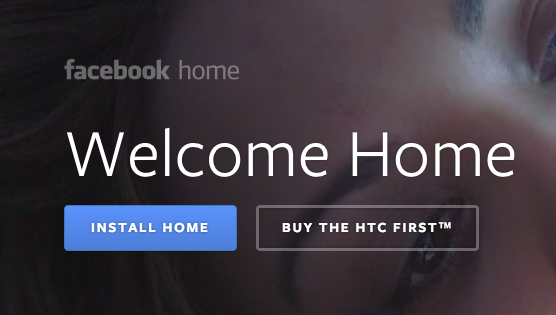 Finally, Facebook has released its not-so-anticipated Facebook Home launcher and it is available for download via Google Play store. You can download it right now from Play store, however there is a catch, it’s only available for U.S. residents at the moment. So, if you’re not living in the US, then unfortunately you will have to wait for a global release.

Living in the US alone won’t give you the chance to play with Facebook’s latest invention, you also need to own one of the select supported devices. Devices that are supported at the moment include HTC One X, HTC One X+, Samsung Galaxy S3 and Samsung Galaxy Note 2. In addition to these, AT&T’s HTC First also comes preloaded with Facebook Home and is available now for $99.99 on 2 year contract.

So, you don’t live in the U.S. and still want to try out the Social giant’s new time killer? Then we’ve got some great news for you! Shortly after the launch of Facebook Home in Google Play store, APK for the app has already been extracted and available for download to anybody around globe.

Although, you still need a supported device in order to install the APK on your phone. In addition to that, you’ll also need the updated version of Facebook app for Android and Facebook Messenger app installed on your device.

After you have installed or updated both apps via Google Play, download Facebook Home APK from here and install it on your device like you’d sideload any other app. You will also have to enable “Unknown Sources” in the Settings menu.

Facebook Home is just a launcher like any other launcher for Android, it comes with Cover Feed and App launcher. If you’re only interested in getting Chat Heads on your device then you only need the updated Facebook Messenger app without Facebook Home.

We have tried installing it on couple of unsupported devices, and so far it hasn’t worked on any of them. So, you’ll most likely need a supported device. However, if it works on any other device of yours then don’t forget to let us know.

Would you prefer Facebook taking over your entire phone? Hasn’t it already taken over your life enough? Let us know how you feel.

Update: MoDaCo’s PaulOBrien has patched the Facebook Home APK and added support for almost all Android devices. Check the official thread if you have a non-supported device.