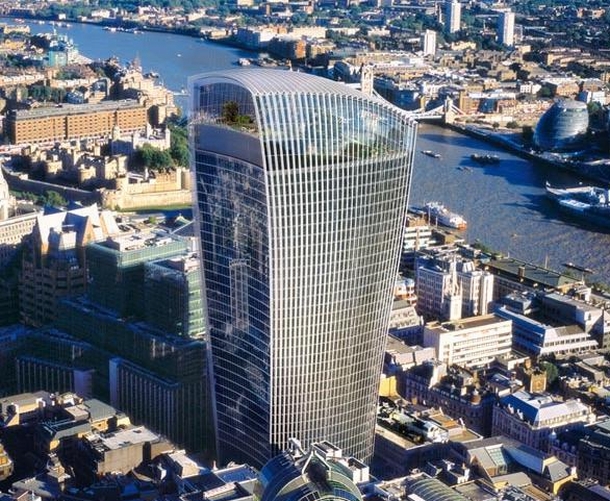 A London building has melted a car. Sure, science is saying ‘something, something, concave design something something light rays’. But I say- EVIL BUILDING GETS IT’S REVENGE!

The ‘Walkie Talkie’ building in London has obviously always wanted to be mobile and has taken out it’s resentment for it’s current state of immovability,  in the best passive aggressive act ever- By melting a Jaguar.

Not a cat Jaguar (because that would make this story a sad story), but a car Jaguar (which makes this a slightly hilarious story). Of course, when you think of a car being melted, you may have an image in your head of the owner returning to find a mess of molten mechanical parts oozing over the pavement.

We’re not that lucky. The car was, unfortunately , all in one piece.

Unfortunately for the owner, he’d left the car equivalent of a smooth potato chip and came back to a crinkle cut. The panels, the wing mirrors and (most importantly) the Jag badge on the car were all warped by, what science believes, was light reflecting through the glass of the ‘Walkie Talkie’ tower’s concave design.

But this isn’t the only victim of the ‘Walkie Talkie’ tower’s rage. No, it’s also disfigured a van, melting all of the plastic interior on one side. It’s melted bike seats.

WHEN WILL THE MADNESS END?

Actually, good question, mainly because now it seems to be starting actual fires, which reminds me of an option in Sim City…. I don’t know how much Horrible Histories you’ve watched recently, but fires in London tend not to be terribly popular amongst the locals. (Also, tall buildings in London? I’m not saying they’re all evil. But, ‘The Tower Of London’ doesn’t have a great reputation).

The Developers of Land Securities and Canary Wharf have said they’re “looking into the matter”.

Just don’t look directly at the Walkie Talkie Tower, it could fry your retinas. Or, it could be very cheap LASER eye surgery. Anything’s possible