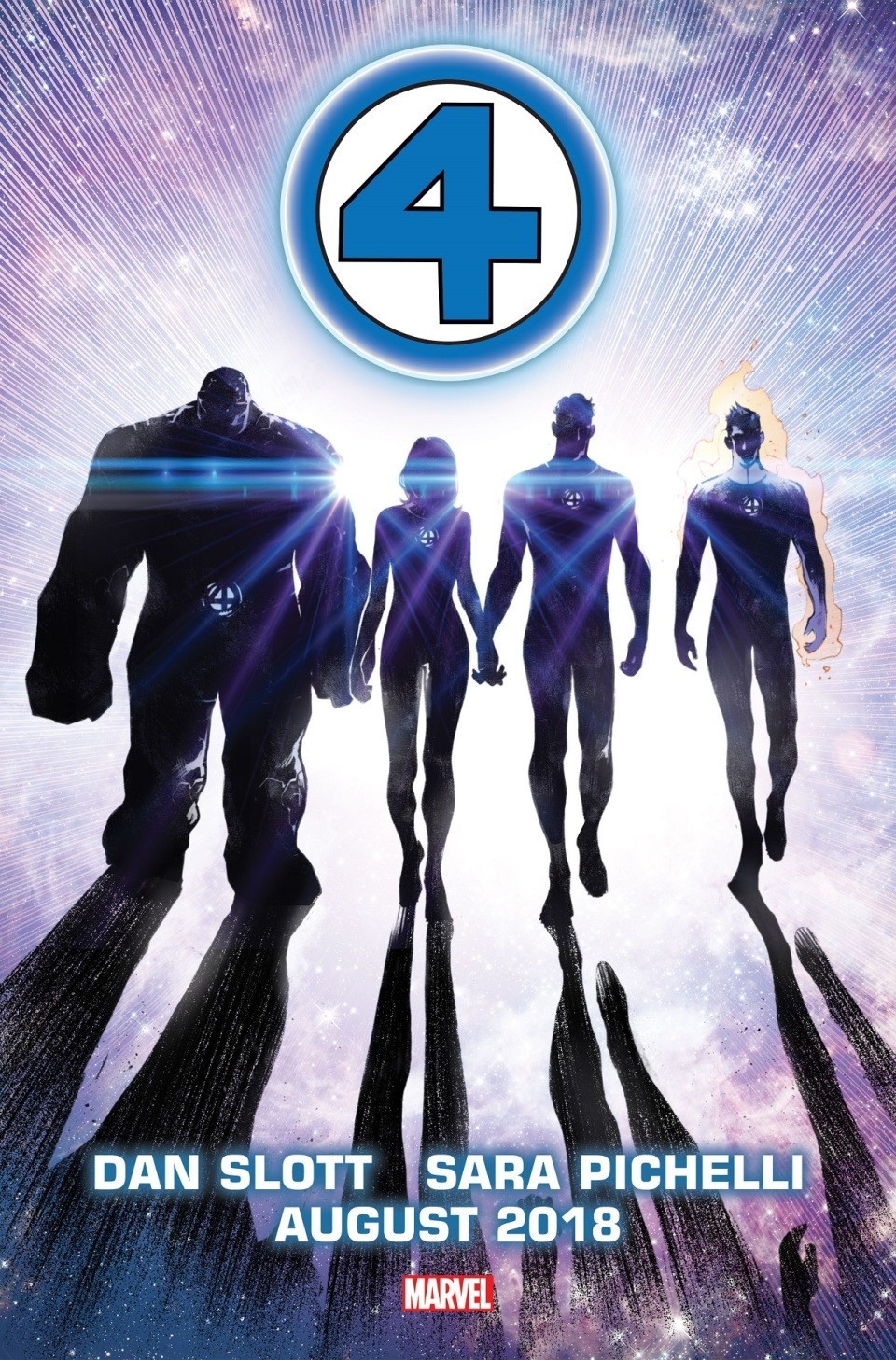 After a three-year absence, the Fantastic Four are returning to Marvel Comics this August in a series by writer Dan Slott (The Amazing Spider-Man, Silver Surfer) and penciller Sara Pichelli (Ultimate Spider-Man, Guardians of the Galaxy). The series will be a part of Marvel’s “Fresh Start” relaunch where they’re returning their classic characters to the forefront with new creative teams and directions.

Slott and Pichelli are an ideal team to work on this book. Slott has previously shown a love for the Fantastic Four in his Thing and Silver Surfer solo series, as well as the Spider-Man/Human Torch miniseries and its spiritual sequel The Fantastic Spider-Man. He understands the characters relationships as both a super team and a family. He was also the assistant editor on Fantastic Four in the 80’s/90’s.

Pichelli is an astoundingly talented artist. Her Spider-Man with Brian Bendis showcases her incredible facial expressions and handling of emotional beats. Her Guardians work, also with Bendis, showcases her talent on weird alien creatures. Mastery of both of those traits is crucial to Fantastic Four. Those coupled with her star power, make her a perfect choice to revive the First Family.

If you’ve been out of the comics loop, you may be asking though:

Why Were They Canceled?

The Fantastic Four was the first Marvel superhero comic. The character’s importance can’t be overstated. If their series, created by Jack Kirby and Stan Lee, wasn’t a smash hit, there would be no Spider-Man, X-Men, Hulk, et al. Without Reed Richards, Sue Storm, Johnny Storm, and Ben Grimm, there’d be no Marvel Studios.

For decades they were the center of the Marvel Universe, prompting spin-offs (Marvel Two-In-One, Silver Surfer) and creating concepts and ideas that would crossover into other books and set up stories for decades to come. 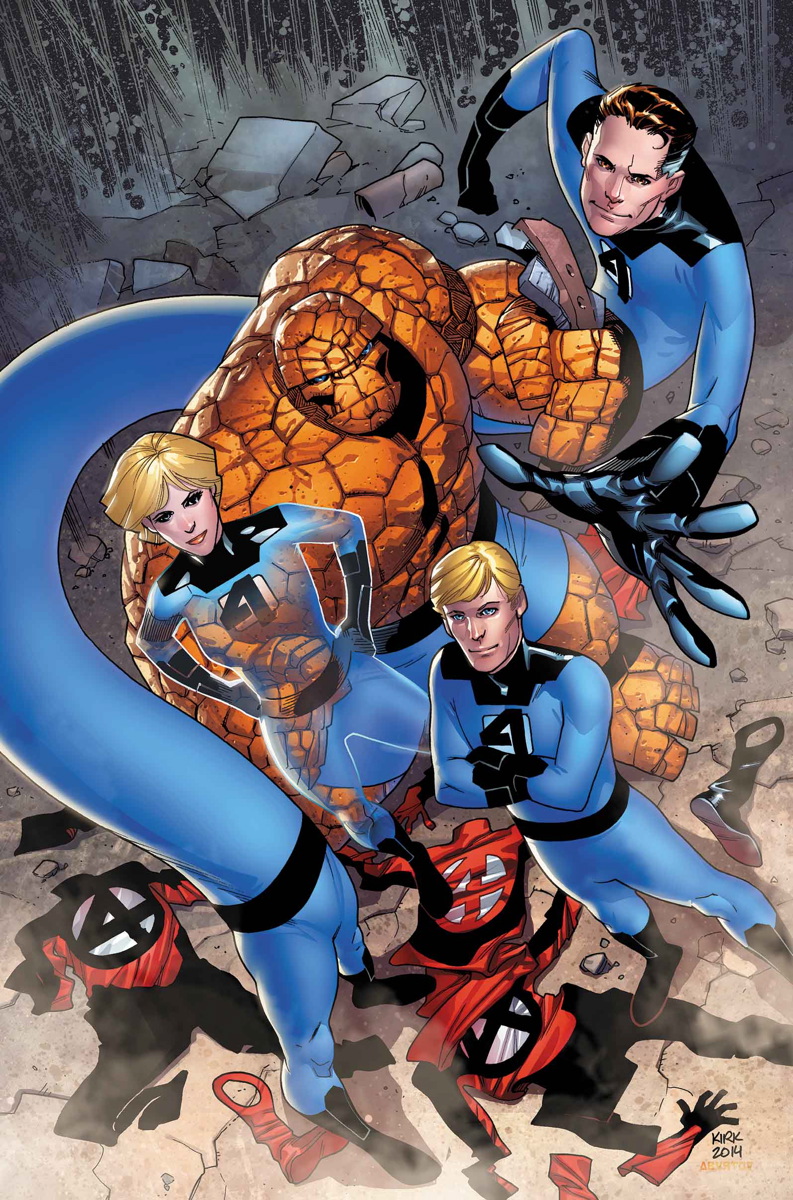 Many important elements of the Marvel Universe were introduced in FF. Black Panther, The Kree, and The Inhumans have all appeared in the Marvel Cinematic Universe, but the FF’s film rights belong to 20th Century Fox.

In 2015, Marvel higher-ups decided that Marvel will no longer promote movies made by other companies, or the characters in those films. The X-Men line, still a massive seller, shrinks but continues. Their merchandising is rendered null, however.

The FF aren’t even so lucky to keep their book. Tom Brevoort, Senior VP of Marvel Publishing, replied that they’d continue to publish Fantastic Four as long as sales were good, but later that year, a recently relaunched Fantastic Four was canceled.

Fox’s big movie reboot blew up at launch. Like the X-Men, they’re no longer included in Marvel products. This goes so far to remove them from group shots on t-shirts. The team and related characters were also removed entirely from the MMO Marvel Heroes (except Doctor Doom, as he was the game’s main villain).

There was sort of a send-off with Marvel’s massive crossover event Secret Wars by FF alumni Jonathan Hickman and Esad Ribic (Thor: God of Thunder). The Multiverse was destroyed and the heroes failed to stop it. All of existence was over. 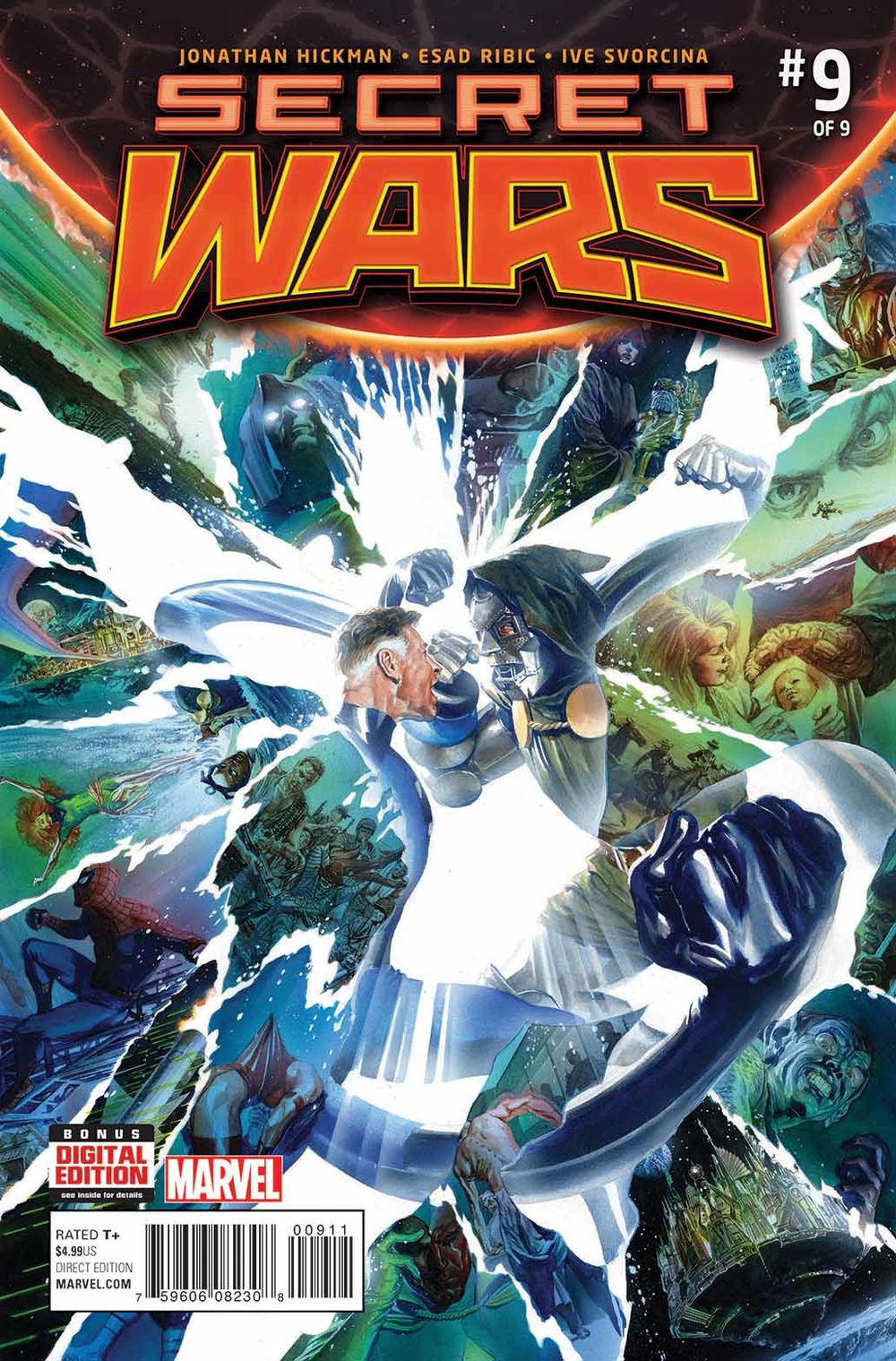 Except for Battleworld, a patchwork planet made up of whatever fragments Doctor Doom, now God Emperor, could save. He claimed Reed’s family for his own. Susan was his wife, Franklin, and Valeria, his children. Ben was transformed into a sentient Game of Thrones-esque wall protecting the various domains from the more violent ones. Johnny was made into the sun, lighting all of Battleworld.

The series ends with Reed and Doom, fighting one last time over who is the better man. Doom finally admits that Reed would have done a better job as God. Reed would create, Doom controls. Surrendering, the multiverse reforms. Reed, Sue, and their kids are now out creating the new existence. Doom awakens on the reformed Earth to find that he is no longer scarred.

The old Marvel Universe ended with the breakup of the Fantastic Four and the new one was created by them willing into existence. It was a beautiful bookend.

After this point, the FF ceased to exist.

Now, you know why they were canceled. But you’re probably asking:

Where Have They Been?

The Fantastic Four were no more, but the characters could appear in other titles and their absence was mentioned in series such as Scott’s The Amazing Spider-Man. There were a few instances where they appeared in flashback, but their “4” insignia was covered.

The Maker, the evil Reed Richards of the Ultimate universe, appears in the work of Al Ewing, who revealed after his play at the power behind Battleworld, he was “sliced” into every dimension. Every universe has a Maker and they share a hive mind. His attempts at Multiversal control are thwarted by the New Avengers and The Ultimates.

The Human Torch had been a supporter of the Inhumans as they travel around the world recruiting new people for their Inhuman nation. He strikes up a romance with their Queen Medusa (which is weird because he used to date her younger sister). He was also on Gerry Duggan and Jim Zub’s Uncanny Avengers team, where he forms a close friendship with Rogue of the X-Men.

The Thing joined the Guardians of the Galaxy. He achieved his dream of being an astronaut. He bonds with fellow Jewish superhero Kitty Pryde and marries an alien woman. After the Guardians get stranded on earth, he leaves the team and joins SHIELD as a specialist in tracking down and apprehending Doctor Doom.

Victor Von Doom, shedding his supervillain nomenclature, decides that the only thing left for him to do is to be a hero. He’s been a villain and a God, and all he ever did was make the world worse. He aids Tony Stark, who he considered his other great rival besides Richards, on several missions. Victor falls in love with Stark’s most recent flame, Dr. Amara Perera, and impregnates her.

After Tony Stark falls into a coma, Doom decides to take up his mantle as the Infamous Iron Man. He arrests many of the FF’s old villains, attempting to fill both Stark and the FF’s absence. He abandoned his country and it fell into chaos. The demon Mephisto vows vengeance on him, furious at him for attempting to reform. He poses as the alternate Reed Richards attempting to convince Ben to kill Doom. Doom calls on the aid of Stephen Strange and they repel the demon.

2-in-One and the Return 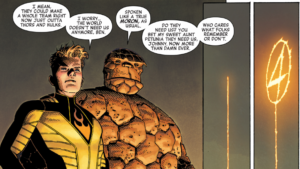 Launched late 2017 was Marvel 2-In-One, a revival of an old Thing team-up series. This new 2-in-One, written by Chip Zdarsky (Howard the Duck, Peter Parker: The Spectacular Spider-Man), featured Ben attempting to get Johnny out of a depressive slump by taking him on a Multiversal road trip to find Reed and Sue. Now, Ben is right, they are out there in the multiverse, but he doesn’t know that. He’s lying to the man who’s practically his brother about their family being alive. It’s a really clever dynamic and Zdarsky balances humor and drama superbly.

2-in-One, as well the announcement of several collections of older Fantastic Four material and a story arc in Moon Girl and Devil Dinosaur, The Fantastic Three starring Johnny and Ben, hinted that the Fantastic Four may be due for a return, but it was pure speculation. On the 29th of March, it was confirmed.

It’s not entirely clear why Marvel chose now to bring the FF back. It could be a result of the 20th Century Fox buyout giving Marvel control of the FF’s film rights. It could be simply because their absence drew up interest in a stale franchise like Marvel did with Thor years back.

We may never know the exact reason why, but with this Fresh Start, The Marvel Universe will finally feel whole.