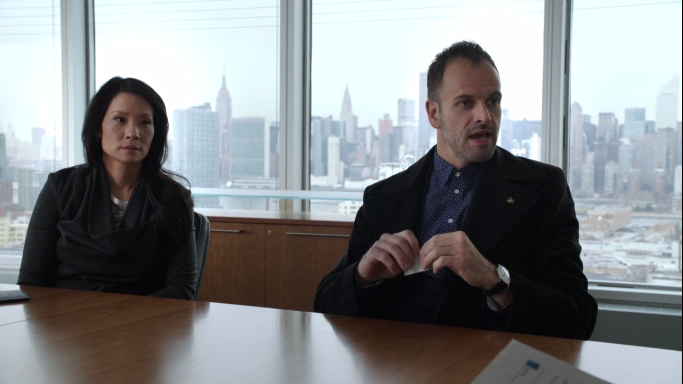 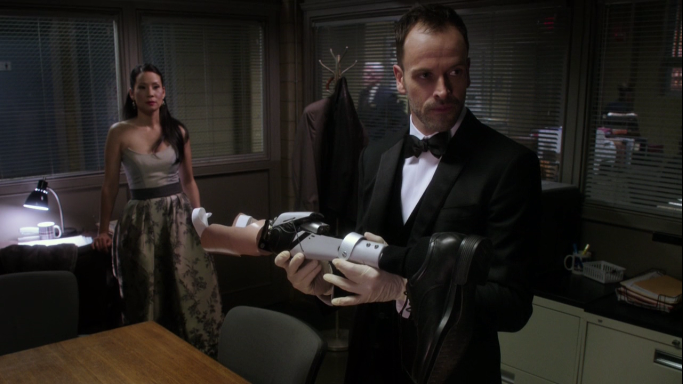 “All in the Family” Recap

We join Joan and Sherlock in medias res as they’re wrapping up a museum smuggling case involving a security guard with a prosthetic leg. The detective working with them, Nash, then ushers them out to claim the wrap up for himself–and this isn’t just regular Sherlock v. NYPD tension; Joan’s peeved at Nash too. It seems that Bell transferred to his intelligence job in Demographics between episodes, and the consulting detectives just haven’t been able to find another good match.

Meanwhile, Bell seems happy at his new job; Deputy Commissioner DaSilva might not like Bell betting against the Knicks, but on the plus side, it means he’s sent out on field work–something he’s sorely missed. He and his new partner head to an oil refinery on a “suspicious activity” tip and happen to discover a headless, handless body stuffed into an oil drum. Bell calls Gregson, who of course brings Joan and Sherlock. Bell isn’t pleased to see Sherlock but presents professionally. The lack of the corpse’s head, hands, and clothes make the victim hard to identify, until Joan notices evidence of several surgeries on the corpse. Her medical expertise in combination with a grade-school fascination with the mafia means she’s able to identify their victim as Robert “Handsome Bobby” Pardillo, the son of one of New York’s biggest mob bosses. The Pardillo and Ferrara families were out for blood 20 years ago, but now have settled down to almost-complacency.

They bring in Bobby’s father to identify the body, and Mr. Pardillo does. He admits that, while his son was underground avoiding the Ferraras for a prior argument, he kept in touch by disguising their emails as spam; Sherlock wonders if their communications could have been intercepted. He also threatens that, were he not a “law-abiding citizen,” “the mutt who did this would be in the ground tomorrow.” Worried that a mob feud is about to break out, Joan hits the list of Ferraro foot soldiers and comes up with Dante Scalice. Sherlock heads over to Demographics to see if they can track the anonymous tipster. They can’t. His real reason for visiting is to offer his services as a consultant to DaSilva, within earshot of Bell. He hasn’t mischaracterized your professionalism, has he, Detective? 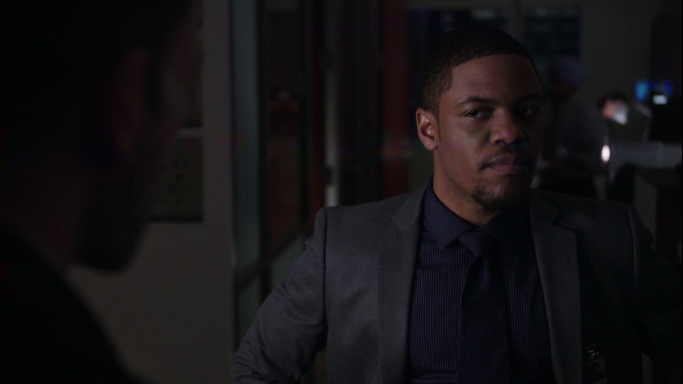 They go to investigate Scalice’s residence but he refuses to cooperate without a warrant. Then he gets into his car, and it blows up. The bomb was made with building demolition, making it likely that it was a Pardillo hit, as the Pardillos make their legal money in construction. Gregson is worried this is the start of a mob war. Inside Scalice’s house, Sherlock finds proof Scalice killed Bobby: printouts of Robert Patillo’s emails with his son and phone records. The National Security Agency gave Bobby’s location to the Ferraras.

The consulting detectives interrogate an employee who works for what they know to be an NSA front, but he denies knowledge, even after Sherlock threatens to subscribe him to several adult websites involving stuffed animals. Bell reveals Sherlock’s plan to help Demographics to Joan, and she rushes home to confront him. It’s true their work with other detectives has been “one bad date after another,” but forcing a reunion with Bell will not bring him back. Sherlock says he knows, and that that’s not why he’s lashing out. Then he’s interrupted by the NSA agent asking for a meeting. The NSA agent makes it clear that Sherlock is not to try and blow his cover again, but admits that the NSA did make the report on Bobby–but they didn’t give it to Scalice. They gave it to Deputy Commissioner DaSilva. DaSilva is in with the mob.

To prove it, they’ll need help. They call Bell to the brownstone and reveal their suspicions; he doesn’t take it well. Bell is furious that Sherlock would ask him to investigate his boss–a good cop–and risk his job just because Sherlock can’t handle the fact that Bell hasn’t forgiven him. Sherlock screams that that’s not the case; he is trying to remind Bell that he’s a detective, and therefore belongs in the field, not behind a desk. He accuses Bell of giving up hope for himself–giving up IN himself and his considerable skills–and of using the tremor as an excuse to stop trying. Instead of punching him, Bell admits that he’s right; detective work doesn’t come as easy to him as it does to Sherlock, and Bell doesn’t know if he’s good enough. He leaves.

Lacking leads, Sherlock and Joan confront Teddy Ferrara, boss of the other family, about DaSilva being his inside man, but he denies knowledge. Scalice received the package with Bobby’s records in the mail; they don’t know how he got it, either. But if DaSilva wasn’t working for the opposite family, why did he request the package? Meanwhile, Bell confronts DaSilva and tells him Sherlock thinks the tipster meant for the police to find Bobby’s corpse and asks for Sherlock’s involvement with Demographics to be stopped. DaSilva agrees. Soon after, Bell shows up at the brownstone with a dossier filled with enough evidence to put Robert Pardillo away for life that he stole from DaSilva’s office. His detective instincts wouldn’t let him forget Sherlock’s suspicions, no matter how mad he was. 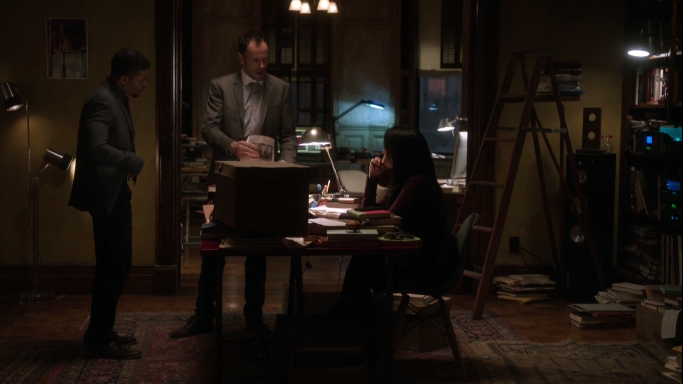 They figure out that DaSilva worked not for the Ferraras but for Robert Pardillo, covering up mob crimes since he was a beat cop. Unfortunately for the mob, he took to his day job too well and grew a conscience. He couldn’t turn Pardillo in without revealing his own complicity, so instead, when ordered to cover up yet another planned murder, he snapped. The only way to get out free and clear is if Robert Pardillo dies in a mob war. So he started one. Since the file isn’t admissible in court, they have to figure out another way to arrest DaSilva. Bell tells DaSilva that they’ve got security tape of Pardillo giving the order to bomb Scalice and DaSilva, whose career depends on Pardillo not revealing his origins, goes out with a gun to make sure his secret dies with the mob boss. The NYPD stops him in the act, and both DaSilva and Pardillo are arrested. Bell returns to the station, back where he belongs.

Are you happy Bell is back? Are you sad the Demographics storyline finished so quickly? What’s next for our detectives? Speak your mind in the comments!

Why Every Geek Loves A Good “Kids” Movie

Outlast Is Coming To PlayStation 4 — Free Fear For The First-Person!