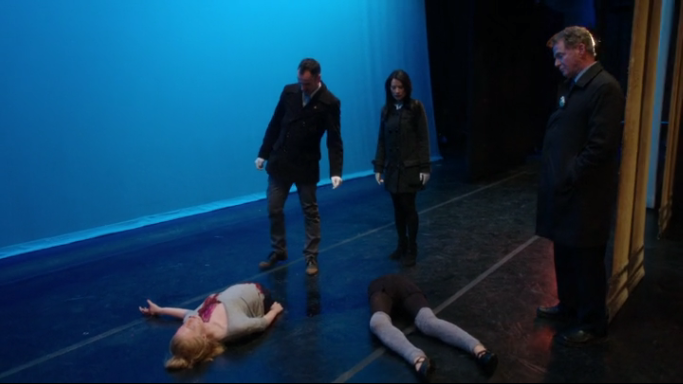 Warning, contains spoilers for previous episodes in seasons one and two. 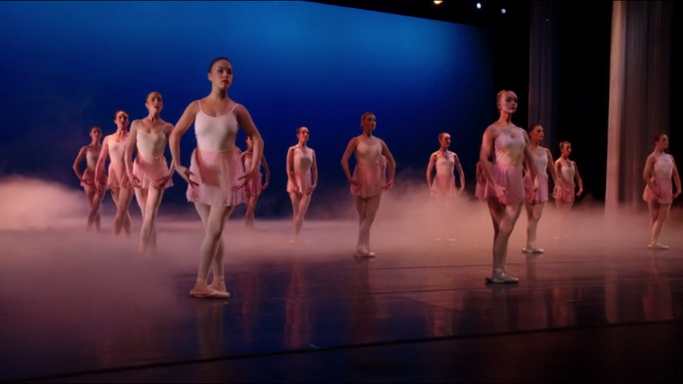 It’s an average morning at the brownstone, which means Sherlock has an entirely consensual, entirely independent ladyfriend over and has politely informed Joan of this fact via post-it, which Joan considers more “on point” than a sock on the handle. (It’s a ballet pun, like the title. The writers are having fun this episode.) After politely offering their guest coffee, Joan and Sherlock are called to a murder investigation– Nell Solange, a ballet dancer, was cut in two by a wire in the theater rafters.

The main suspect is Iris Lanzer, the prima donna of the dance troupe who received the lead role that was originally choreographed for Nell. Detective Bell (allowed out behind his desk but still not allowed to carry a gun or work unsupervised) finds the actual murder weapon, a box cutter with an iris sketched on the handle that was used to slit Nell’s throat before she was tied up in the rafters, staged to be cut in half and fall. Sherlock however, doesn’t believe Iris is the murderer because, her being such a master at her craft, “it would be like [him] wanting to kill the world’s second-greatest detective.” Also, because he’s a giant Iris fanboy. 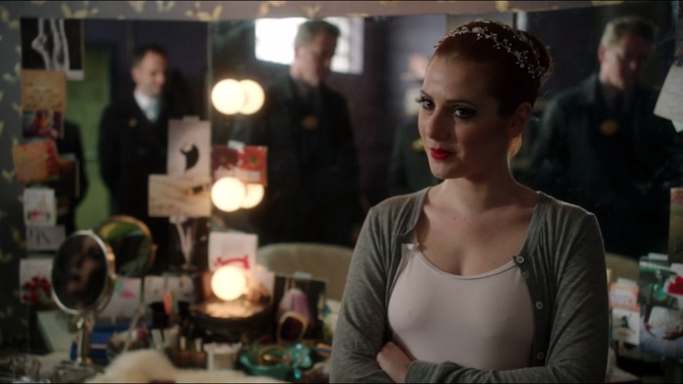 Iris mentions that Nell recently broke up with Nicholas Orman, an ex-member of the troupe with a history of anger issues. After giving her own alibi, Sherlock, Gregson, and Bell follow up on this tip. Nick says he accused Nell of cheating on him with another guy, and that’s what caused the breakup (and the restraining order threat). Unfortunately, despite the strong motive, he has an airtight alibi– dancing at the strip club where he works since quitting ballet.

Iris, it turns out, doesn’t; her housekeeper was in fact unable to confirm she was home sleeping the night of the murder. She also continues to claim that Nick is a more likely suspect, saying that Nell wasn’t dating anyone else, to the best of her knowledge, and that the two of them weren’t close. Her attorney insists Iris only made a mistake when giving her alibi, but her refusal to cooperate with the police and intention to leave the country to teach a ballet masterclass force Gregson and Bell to arrest her, even if they’re still not sure she did it. The news outlets go absolutely nuts.

While Sherlock is investigating the murder, Joan begins looking into a case of her own– the disappearance of “Freebo,” a homeless veteran whose friend is sure he was kidnapped. With Bell’s help she’s able to identify the missing man as Zeke Frebo, a veteran army sergeant who ended up on the streets after returning with severe PTSD. 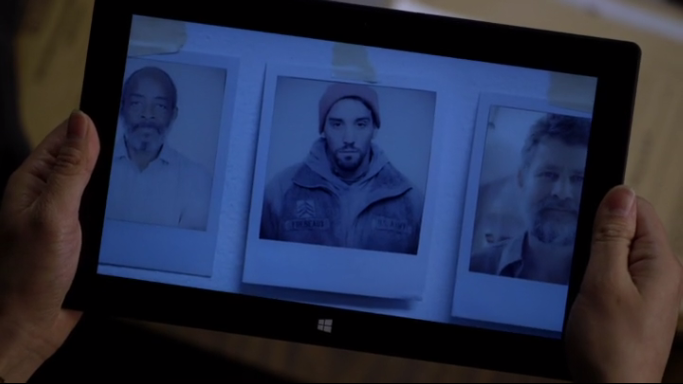 The next morning, Joan prepares another coffee for Sherlock’s overnight guest, but when the guest emerges– it’s Miss Lanzer. Sherlock assures Joan that he is being entirely professional about this, and only slept with Iris in order to advance the case. He could sense Iris wanted to use him to find out more about the investigation, so he used the opportunity to confirm a theory; Iris Lanzer has a tear in her right shoulder that, while not affecting her dancing, would have kept her from being able to haul Nell up into the rigging. He also was able to gain access to Iris’ attorney, Nolan Sharp, and the list of restraining orders she’s had issued, including one against a photographer whose camera she broke. Nolan explains he’s a huge supporter of Nell (one with a fancy door closing mechanism) and often doesn’t charge her for his services out of admiration.

Joan follows up a lead in Frebo’s disappearance; a neighbor saw him arguing with a woman. Going to the woman’s house, she finds out that he was arguing with his sister, who was trying to get him to come home. Joan commiserates and tells her its not her fault; she couldn’t keep him from leaving if he wanted to.

When she meets up with Sherlock to investigate the paparazzo, Sherlock tells her she smells horribly of Double T cigarettes from Frebo’s sister’s house– and then chastises her for not reading his monographs on tobacco. (Eyyy, classic Holmes reference.) The paparazzo definitely has motive, as he hasn’t been able to get steady work since Iris’ attorney proved him a coke addict. He also implies he has some sort of information on her, information he may have gotten through skeevy stalking-and-hidden-camera means, but kicks them out when they press him.

Bell calls them and informs them the press has gotten hold of a voice message Iris left Nell right before she died– revealing that Nell’s “boyfriend” that she wouldn’t tell Nick about was actually Iris. Iris admits she was having an affair, but denies killing Nell; though her original intent in seducing Nell was to get her to step aside for the lead role, as she’d done with previous competitors in the past, she ended up falling in love with her. Sherlock realizes Iris’ phone must be bugged and, after confirming the presence of spyware, has a pretty good idea of whose trying to frame Iris– the paparazzo.

After he’s arrested, the paparazzo admits to stalking and bugging Iris, but not to the murder. After all, he has an alibi: he was placing hidden cameras in Nell’s apartment to try to catch the women’s tryst on tape. His tapes confirm that, leaving them once again with no suspect. Sherlock discovers a second layer of audio on the recording– as if it was a recording of the voice message and not the voice message itself.

When asked why Joan cares so much about “hobo hunt 2014,” Joan reveals that her father– her biological father, not her step-father, whose name she shares– is a schizophrenic who disappeared as a child. She often works at homeless shelters in hopes of seeing him, but hasn’t for two years. She brings a collection of coats to the shelter where Frebo’s friend is staying, and he gives her Frebo’s bag– full of Double Ts and a picture of his family. The woman identified as his sister in the photograph is not the woman Joan spoke with before. Bringing the fury of the NYPD down with her, Joan revisits the house and finds Frebo and two other homeless men in the woman’s basement, kept there once they realized their veterans’ and disability checks were being stolen. 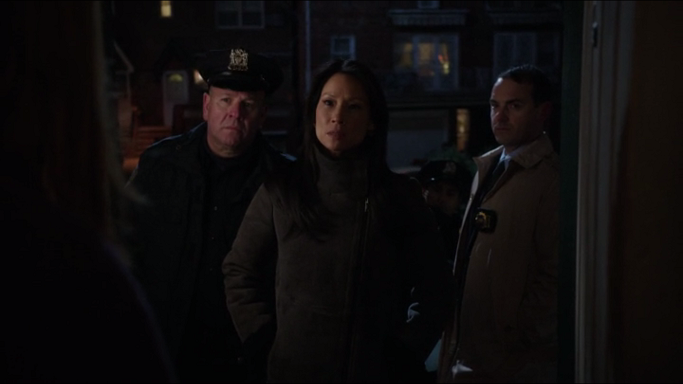 On the recording, Sherlock identifies the sound of Nolan Sharp’s electronic door closer, and accuses the man of using Nell’s murder and Iris’ arrest as a publicity stunt to raise his own reputation as an attorney. But why stack the deck against his client if he didn’t know he could acquit her? Sherlock suspects he has a final, exonerating piece of evidence up his sleeve– the security camera hard-drive stolen from the theater. A warrant is issued and the NYPD finds the hard-drive in his office, showing video of the murder suspect, who is about the same height, weight, and build as Sharp himself. Gregson arrests him.

Cases closed, Sherlock collects extra blankets from the brownstone and suggests he and Joan distribute them to needy patrons in the park.

Is there a chance we’ll be seeing Joan’s biological father later? Speaking of family, what’s Mycroft up to? What did you think of the episode? We’d love to see your comments.