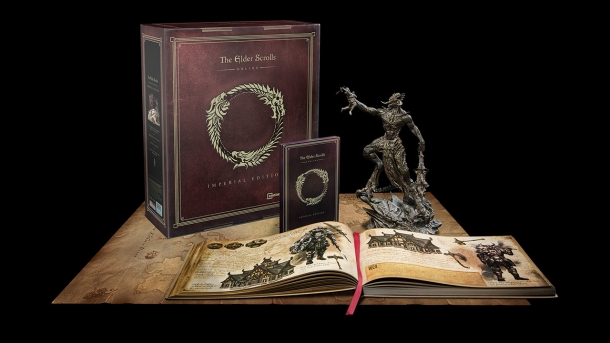 I was hesitant about preordering the Imperial Edition of Elder Scrolls Online….But then I remembered the time I didn’t get the Collector’s Edition of Skyrim and it was worse than an arrow to the knee!

Luckily, if your fear about pre-ordering Elder Scrolls Online has been rising like a drauger because “What if it’s just not as good?” then allay those fears. ALLAY THEM, I SAY! Bethesda have been answering your questions!

Well, if you’re a Playstation user….

As much as I want to have a dig at Xbox One users (as it my right now that I own a PS4….It’s sweet, by the way. Like, really awesome and I love it), the recent Q and A held by Bethesda with the PS4 users will most likely translate well for Xbox One users as well.

The biggest fear for many console users, is the controls. In a MMORPG, skill can get you a long way, but the wrong controls can hurt even the best players. Too often, game developers seem to forget that gamers are an incredibly varied group of individuals. Not so, with Bethesda….Because they’re Bethesda and that’s kind of like being the Santa Clause of good game making.

“Throughout ESO’s development, our goal has been to create an MMO that is fun to play and is familiar to Skyrim fans. Gameplay in ESO isn’t identical to Skyrim, so naturally we’ve made some button configuration changes to reflect the differences, such as the use of abilities. At the same time, there are a lot of controller configuration similarities between Skyrim and ESO.”

This is good news for all of us, Xbox One and PS4 players alike. The button configuration in Skyrim was natural and easy to pick up, especially if you’d played the earlier Elder Scrolls games. That Bethesda even acknowledge that they need to get close to that to make the players feel comfortable, is a great sign.

A little more worrying though, is their answer to the question of action bars (from PS4 user AdamJ_Floyd) which as most PC MMORPG players will know….Are kind of really, incredibly important, when playing a MMORPG.

“We’re still testing and tweaking different DualShock 4 button mapping configurations, but we’re very happy with the gameplay experience on PS4. Abilities are conveniently accessible for fun “on the couch” gameplay, and the team is really happy with how it’s coming along. We’ll have more specifics to share about this topic later this year. “

This worries me. They’ve already set a release date, which means whether they’re ready or not, something is coming out in June. Bethesda, if you can hear me and I know you can because you keep creating awesome games with dragons and stuff, please….If it’s not ready for the consoles, don’t bring it out. Delay it if you need to. We don’t need a half formed game, we trust you and if it takes you that little bit longer to get it as perfect as you always do, then take that time. I’ll be waiting.

PC and Console Players actually getting to play together?!

There’s a question I really wanted to know the answer to, but no I was not PS4 user Adzaofoz, who asked the question.

The answer is a fairly resounding ‘NO’. Not unless you’re sitting in the same room. Even then, you’ll be playing in alternate dimensions, which is it’s own special brand of cool, but not the cool you were looking for.

PS4 users will have their own dedicated ESO megaservers (European and North American). PC and Mac users will not be on the PS4 megaservers. This is good news for PS4 players as they won’t have to worry about contending with higher-level PC players when ESO launches on PS4.

Oh, that’s sweet….We don’t get to get killed because we’ll be nubs and they’ll be leet….

I am hoping that this changes in the future though. As unlikely as that is, it’d be nice for console and PC players to finally get to play one another, regardless of how they choose to play. I really think that’s the future of gaming anyway, with games being the driving force, rather than the machines that are playing them.

Still, if they never change it, I won’t mind….Because this game looks so hot that I’d buy it on console and PC.

Will playing online with The Elder Scrolls Online have a separate subscription compared to PlayStation Plus? (From PS4 User Nathanael Moner)

…. Which is not really the answer to the question that the PS4 user asked.

As long as Bethesda don’t charge too much, I doubt there’s going to be too much of an outcry from any of the users, PC or console. Some might see it as double dipping, but you can’t help people who are wrong and refuse to see how wrong they are. You just can’t.

You can check out the full run down of the Q and A here.

Does this mean that ESO will be the Game of the Year? I don’t think so. Titan Fall is just too huge and pretty for that to happen.

But will it topple WOW and LoL? Maybe. Anything is possible.

This much is certain, even though I don’t like people I will be playing Elderscrolls Online because it looks amazement.

But what do you think?