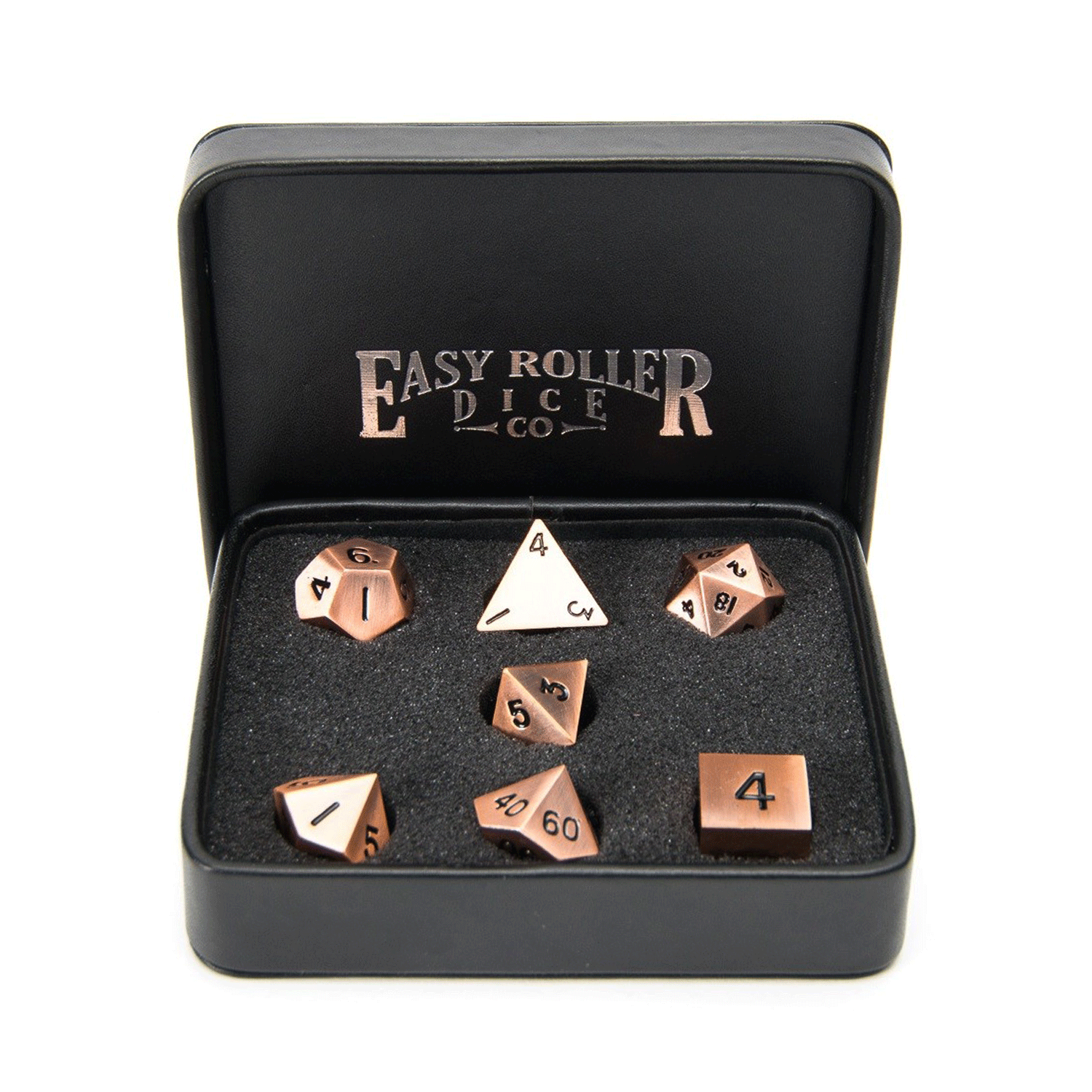 Dice, you roll them and numbers come up; what else is there to say? I recently got the chance to try out some new dice from the Easy Roller Dice company. At first I was pretty unsure about what to say about dice in general. I knew I wouldn’t be rolling them enough to get a real sense of their randomness or, as most players are looking for, that they are at least going to skew higher over the long run. There are really only a couple of characteristics we gamers actually care about: do they look cool while being readable, do they roll well, and are they well balanced. In the end that is what I decided to focus on. 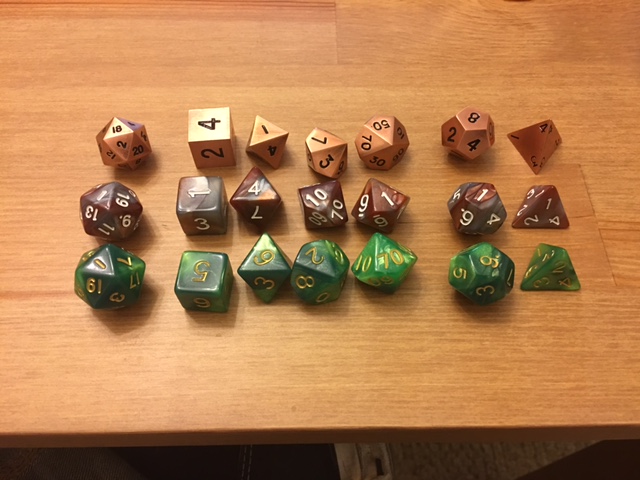 I have to say I was very excited upon receiving these dice. They looked pretty cool and it’s the first set of metal dice I’ve ever owned. Unfortunately they didn’t arrive in time for my bi-monthly gaming session. The metal dice I was planning on predominately using would have meshed very well with my character: A 5th ed. gnome warrior who was obsessed with tinkering better armor to compensate for his very poor fighting skills (10 str/ 13 dex is legit right?). When I did get them the following day, I was certainly disappointed I hadn’t had them the night before. The Legendary Copper dice set was stunning. The striking faces and unfamiliar heaviness gave holding them a strangely satisfying sensation. I was very taken in by these. I have of course seen other metal dice, mostly mini d6 sets and floating face metallics (which are very cool in their own right, but have additional issues). The edges were crisp and the faces were shiny and I was certainly drawn in.

The Traditional Dice Did Not Disappoint 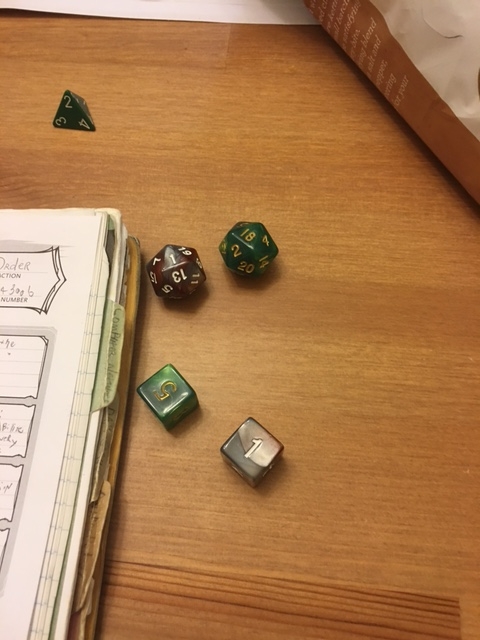 The website claimed Traditional dice faces would be highly visible and they were. The colors were crisp and the swirling patterns of the plastic seemed evenly distributed in an appealing way. The only critique I had was one of the faces was missing part of an embossed number. The top half of the 2 was missing on my d6. This is a common manufacturing defect among dice, as anyone who has looked at a bulk dice bags will know, so I do not ping them very highly for this. The attitude of the folks over at Easy Roller also give me no reason to believe they would not have taken care of this had I brought it to their attention.

Defect noted, I was still very excited about getting to play with them. However, with two weeks before my next session, I spent some serious time figuring out how to tell if they ‘rolled well.’ In one regard, a d20 that always rolls 20s would be pretty sweet. Everyone who has played more than a few campaigns will have their special die. The one, or the set, that just rolls better. I do. I have a plain, solid green, translucent d20 with white lettering. I swear it rolls a 20 or an 8 (its adjacent neighbor) far more frequently than it should. I DM with it when I want the PC s to hurt, I used to roll it all the time for every roll my character would make. Nothing emasculates a barbarian than a bard getting a double crit killing blow with a pally smite tacked on for some extra overkill. The thing is though, that gets boring. I find that I don’t use that as much because it takes the fun out of the game. Of course it still rolls other numbers, and to my knowledge it is not intentionally weighted; it’s just poorly made. It’s a lot more fun to have dice that are truly random.

So, for me rolling well means are they well made enough to be pretty close to truly random. With that out of the way, I set out on trying to figure out the best way to see if they were in fact random. There is no way I could roll the dice enough times to see, and any experimental rolling would not produce a sufficient sample set for any generalization. So I fell back on some cold hard science. A well-made, well balanced die should produce a pretty random roll. I whipped out my handy dandy micrometer (we all have one of those right?) and went to town on some serious measuring. Turns out that on some of my favorite dice the faces are slightly uneven. To the surprise of no one, the metal dice from Easy Roller were spot on perfect. Working in metal, you tend to get better precision. So far they are shaping up to be totally worth it. The plastic ones I was expecting to see some variation as I had noted on some of my old favorites, but there was none to be found. The faces of all the die were as accurate as my micrometer could measure! That came as a bit of a shock to me, since even my official D&D branded promotional dice and some minor variations in the face widths. So far so good.

Time for a Little Science Experiment… 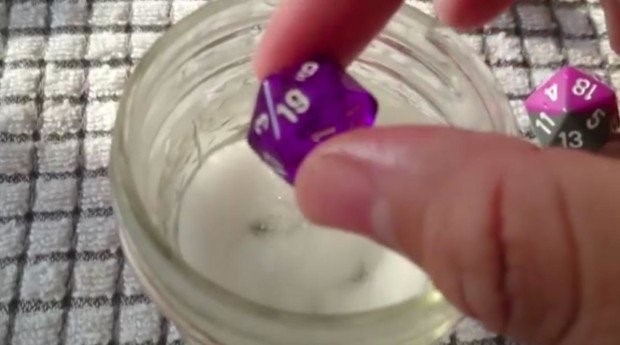 Another common test that I’ve heard from heard of from more than one source is that by floating dice in salt water you can easily tell if they are weighted. A quick google search confirms this is a thing, so I set out to give it a try. Obviously the metal guys had no chance here. Besides, they are probably a solid chunk of metal anyways. Its plastics that we care about here, because the molding process can inject tiny air bubbles into the dice and that is what causes them to be off balance. So I broke out the table salt and some warm water and tried my best to recreate this experiment.

I did manage to get some of my dice to float, which appears to be a problem for most people. However I was unable to really get a good feeling about what I was seeing. They seemed to not settle on any particular number, which is what we are looking for. I think the idea is if one face is heavier than another it would settle on the bottom and the lighter face would be the one on top. I never got that, I usually got corners floating, so I guess that’s a good sign? They seemed to have passed this test, but I ended up feeling like I had just wasted a lot of salt. (This is the guide I used if any of you want to try this on your own.) 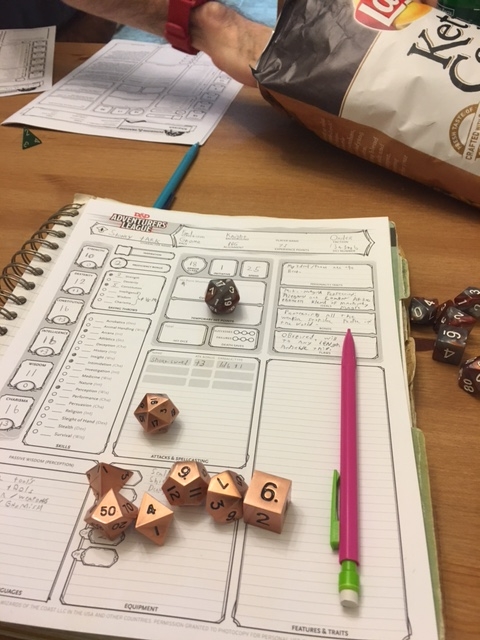 With that behind me and feeling pretty confident about my new dice I was ready to meet back up for some gaming. I was very pleased with the reaction my new dice got. I asked for everyone’s opinion and it did seem a little weird, but everyone liked the look of the dice and got a strangely satisfying experience with the metal dice. The game begins and it’s the moment of truth: time to roll. THUD THUD THUD. The heavy metal dice roll particularly hard and loud when compared with a table of normal plastic dice. This was immediately noticeable. The D20 rolled pretty well though, but sometimes felt it was rolling a bit flat. Its own weight might be preventing it from getting a good roll on a wooden table. This was even more noticeable with the d6. It would often fall flat, with a very loud thud. Also I’m pretty sure that corners were starting to make some appreciable notches in my friend’s soft wooden Ikea table. The d4, d6, and d8 seemed to be the main offenders, with the d6 again standing out.

At some point fairly early on, I switched to rolling on my paper notebook; hoping that the paper would absorb some sound and maybe help with the bounce a bit. It was substantially less noisy, but the rolls were even more flat. Just a dead drop with very little bounce or roll. Adding to the trouble was that the faces on the metal dice became slightly hard to read at various angles. The issue was at certain angles, the faces of the die showed a black coloration. This is the Iridescence of the material; the property of something to appear to change color depending on the angle of observation. Lots of materials do this and most the time we barely notice, except the numbering is also black. This made it difficult to read at some angles; mostly the angles I was sitting at. The metal dice looked and felt great, but rolling them was loud, damaging, and somewhat flat. Although, further rolling on a counter top, and a concrete floor showed that the harder the surface, the better the metal dice would roll. (I took this a little further after the game and rolled them a few times on the host’s pool table. They rolled better on the felt lined granite, but did leave some noticeable impressions on the felt.)

Ok, It Was Time to Break out the Plastics 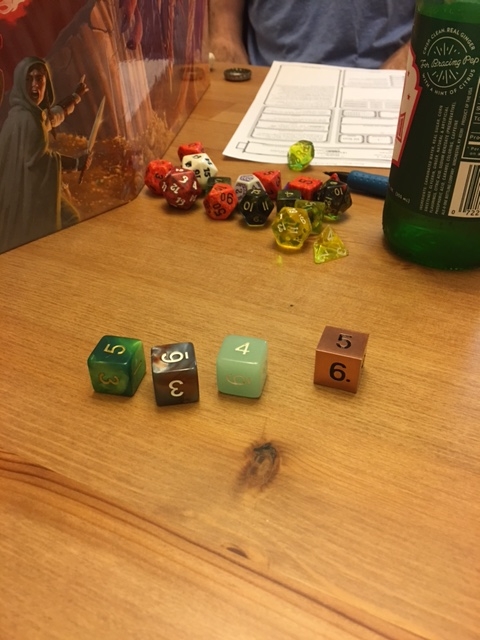 I was pleasantly satisfied with them up to this point, they seemed well made and were pretty to look at. After only a few rounds it became obvious that their quality was the real deal. They rolled very well out of the hand; on both the tabletop and on paper. At no point did I feel they were falling flat, or skewing towards a particular face. I let my monk friend borrow one of the sets because his d20s were particularly bad for him that night. I’m afraid they didn’t improve his luck, but to me they appeared to be rolling better. Also the coloration of the numbers was very clear. This is painfully obvious when compared to other dice where no consideration was given to ‘can the players actually read the faces’.

Game over. We got pretty beat up. A monk that can’t punch and a fighter who is bad at fighting (for now) pretty much sealed the deal, but we survived to game another day. Discussing the results of my dice with my friends we got on the topic of plastic molding / 3d printing. We all pretty much agreed that production quality was the key thing for dice. Too many or uneven air bubbles in the plastic would lead to weighted dice. To test this out we took the DM’s Dremel tool and I offered up a sacrificial die. (Bye d6 with the messed up 5). His Dremel wasn’t quite up to the challenge of sawing through a die, which was pretty surprising. He claimed the battery was low and the blade pretty dull, but I’d like to think that these die are just that bad ass.

The colors and designs are vibrant, the construction is high quality, and they feel great when you roll them. Only time and a fully charged Dremel will tell if they are truly going to be random, but I’m sure I’ll enjoy them in the meantime. The metal dice are all around pretty great. They are awesome to use and they give you a different feel when you roll them, and if you have a different table, your results might vary from mine. His table was made of a soft wood-like substance, and I’m sure that harder surfaces get better rolls out of them. If you have a serious dice collection going on, they are worth a buy. Rolling them is extremely satisfying. I think I’d consider a different style though, because the copper iridescence was kind of annoying. I would also stay away from glass tables if you end up ordering these.