Even if we like to joke that we don’t, gamers know the difference between real life and video games. Still, it’s a lot more fun cutting your lawn in Zelda than in reality, more fun gardening and feeding your pets in Minecraft, and more fun driving to pick up groceries in GTA:V. And why? Because you get rewarded. The mundane in reality is turned adventurous when you know each task or random encounter could get you gold, achievements, or that rare item drop you’ve been lusting after– and it’s exactly that concept that inspired Tyler Renelle, HabitRPG’s creator, to apply the anticipation and fun we get while gaming to improving productive behavior in our everyday lives.

A habit building program which treats your life like a Role Playing Game. Level up as you succeed, lose HP as you fail, earn money to buy weapons and armor.

The base gameplay for HabitRPG is simple: you create a list of Habits (both good and bad), Dailies (tasks you must do by the end of the day), and To-Do tasks (that you must complete eventually). When you accomplish a daily task, an item on your to-do list, or do something towards building better habits, you earn EXP, gold, and item drops. When you fail to complete your dailies or engage in bad habits, you lose health. When your health gets too low, you start backsliding, losing the progress your character has made in the game. The system is therefore set up to provide both fun, positive reinforcements for productive behavior, and negative consequences for slacking off or avoiding tasks.

That’s only the base gameplay, however– since HabitRPG’s conception, the game has been evolving in leaps and bounds. Now players who reach level 10 can choose a class to specialize in. You can join a guild and participate in community challenges for Gems and other special rewards. You can collect pets and tame them into rare and powerful mounts; buy armor and equipment that will help you gain more EXP or lose less HP while working on your tasks; join parties with your friends and take on Quests and Boss Monsters for gold and glory; hang out in the Tavern and trade productive tips with fellow occupants of Habitica. You can even contribute code, art, or ideas to the game itself.

HabitRPG started out as a Google Spreadsheet Tyler (lefnire on the game) and a few players were using to track their accomplishments during the day, but after Reddit discovered the system, the website couldn’t handle the load. Someone suggested a Kickstarter campaign and the idea was so popular, HabitRPG and its staff received $41,000 in support to improve the game. Siena Leslie, known as Lemoness in the community and current Community Manager, discovered the game at this time and happily jumped in to help.

“The HabitRPG that you see today and the HabitRPG that I saw back then were staggeringly different,” she admits. “It was just you, your tasks, and a little [health] bar that went up and down at the top. But even then, there was the dream of more: a Trello board and Github thread stuffed with ideas for features. What if you could tag your tasks? What If you could form parties with your friends? What if you could have PETS?”

Habiticans (or Habiteers) as a whole are eager to help their game improve. HabitRPG is opensource, with a community that works together to both suggest improvements to the system and to enact them. Siena herself began her involvement by a simple suggestion that there be ways to customize your avatar’s appearance, as there was only one default appearance at the time. “I had no idea that I would be designing and spearheading the character customization system several months later,” she says. “But that’s the beauty of HabitRPG – if you feel passionate about a feature, you can leap in and start to make it a reality!” In fact, giving back to the game is an option now built into the game itself, with those who choose to donate their time and skills to the game being able to gain Gems, special Titles such as Friend, Elite, and Champion– and Heroic if their involvement eventually promotes them to main staff. “Another great thing is that you don’t have to work in a vacuum,” she adds. “It’s all incredibly collaborative!” 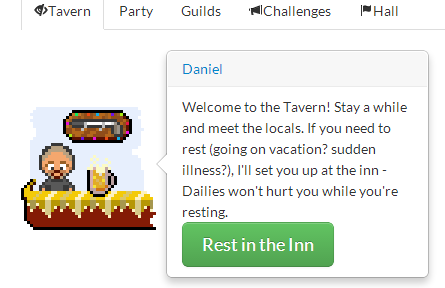 And she has a point– Siena, Tyler, and the other staff members switch on and off, devoting their free time to improve the site and giving the players themselves the chance to contribute as much as they themselves would like. Vicky Hsu (redphoenix in game), in charge of Business Development and Legal Issues, says the sense of community and willingness to work together to improve both the lives of its players and the game itself is definitely one of the most unique things about HabitRPG. “It’s worked out well for us. Other programs that are sort of similar to ours seem to be single-developer, closed projects that update very slowly, if at all. In our case, we have trouble keeping up with some of our more prolific contributors, because everyone’s working on features they’d like to see!” Since none of the staff is paid for their time working on the game, all proceeds going towards its hosting and improvement, the staff is more than grateful for the involvement of the players.

“I firmly believe that HabitRPG has attracted the ‘creme de la creme’ of the internet,” Siena agrees. “In the Tavern chat, everybody is constantly chiming in to help answer questions for newcomers and cheer each other on. From personal experience, she seems to be right– in the public chat, players trade tips for staying on task or getting motivated, happily discuss new developments, and are quick to invoke Wheaton’s Law rather than Godwin’s. By all accounts Habitica might just be the happiest, and most productive, place on the internet.

HabitRPG is available online at HabitRPG.com, and on your phone and tablet via an iOS and Android app.