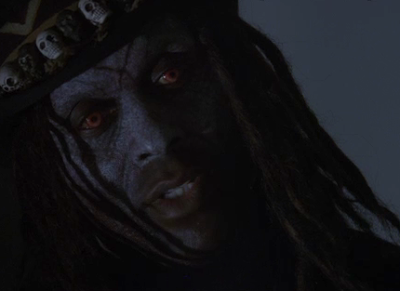 WARNING: Spoilers abound beyond the confines of this line!

By season’s end, I’m very scared that I might wind up going bald from the maniacal aggravation American Horror Story: Coven is causing me. Particularly after watching “The Magical Delights of Stevie Nicks,” I felt as torn apart as some dark ages criminal being unceremoniously dismembered with rope and horses for all the peasant community to see.

On the one hand, this episode is no doubt one of my favorites of the season. It’s American Horror Story like I know it can be: an engaging story rooted in character, setting, and honest-to-God American horror. Such was the case in the beginning, where we’re introduced to a new character: the voodoo king Papa Legba, played with coyly menacing malaise by Lance Reddick. Right off the bat, I was glued to the screen at this sinister, intoxicating hybrid of Lil Wayne and the lipstick-face demon from Insidious.

Papa Legba lurks into Miss Robichaux’s to remind the immortal voodoo queen Marie Laveau (Angela Bassett) to pay her annual debt so that she might stay undying. Marie then magically manipulates her way into a hospital nursery and steals a newborn baby for reasons at that point unknown. She then gets past the threat of two security guards by magically manipulating them to shoot each other dead.

See how I used the word “magically” twice? That’s the exciting part! The show is actually letting its characters flex their mystical muscles, an element that’s been sorely lacking in episodes past. Better still, we see Marie use her voodoo very cold-heartedly, yet at the same time there remains a thin film of remorse on her face regarding the depths she’s forced to stoop to to retain her immortality. Conflict! Character development! Terrific acting from Angela Bassett! Was I on the wrong channel or did Coven actually get exponentially better?

In some cases, I was in fact treated to this exponential betterment, specifically when the telekinetic Nan (Jamie Brewer) came forth and became the backbone of badassery for this episode, beginning with her musings of emerging as the new, much kinder Supreme of the Coven. She then silenced her classmate Madison’s (Emma Roberts) cynical disparagement by telekinetically forcing Madison to insert a lit cigarette in the unholiest of holy places, to quote Pulp Fiction.

Nan then finds out that Luke, her love interest next door, was smothered in his hospital bed and later cremated by his controlling mother (Patti LuPone). In response, she uses her powers to punish the mother by telekinetically forcing her to chug a jug of bleach—a form of punishment she previously inflicted upon Luke—until she could breathe no longer.

The sheer shocking thrill of Jamie Brewer’s performance, for me, solidified my unadulterated adoration for Nan and made me feel genuinely optimistic about Coven’s apparent trajectory.

My hopes were then whittled to a whimper when current supreme Fiona (Jessica Lange) and Marie drowned Nan in the bathtub after Nan’s clairvoyance revealed the location of Marie’s infant originally intended for Papa Legba. Instead, Nan’s soul is sacrificed to Papa Legba, much to the delight of Nan, who figures the afterlife is probably better than Earthly life in the coven anyway.

There I sat, mouth agape and hands raised in utter disbelief of what just happened. In one fell swoop, my adoration crumbled to familiar lethargy, a sinking feeling that was plunged even lower than Nan’s watery deathbed by the rest of the episode’s maddeningly sluggish pace.

It seemed as though the unity of the coven and Marie Laveau would yield some actual plot progress as they sought to eradicate the formidable threat of Delphi Trust, an immensely wealthy corporation of witch hunters responsible for murdering members of both the voodoo community and the coven. However, instead of banding together with the goal of total eradication, Fiona and Marie merely poked Delphi with a proverbial stick by lessening their financial worth.

Enough already, Coven! If the central theme you’re playing at is the marginalization of minority groups (i.e. African-Americans and Salem witches), then write to that! Cue up “Why Can’t We Be Friends?” and bring me the badassery of this unified force!

Enough with this overlong ‘Who’s gonna be the new Supreme?’ plot thread! It plays like some moronic enchanted spin-off of The Bachelorette (The New Supreme), which I absolutely do not mean as a compliment. It only makes for petty bitchiness and internal unrest that solves nothing when there’s a pissed-off, penniless horde of witch hunters salivating over the thought of exacting revenge.

And, most of all, enough with this silly subplot of Fiona’s undying quest to be forever young! Though I’m glad Fiona’s lust for youth made her crave a deal with the devil and, thus, brought back Papa Legba for another scene, this subplot has never been interesting and it sickens me that the writers are allotting it so much story space. Fundamentally speaking, it makes no sense to have any vested interest in seeing Fiona succeed in any way because she’s already such a spiteful, unsympathetic character to begin with. Look at the immortality-hungry Marcus Brody from Indiana Jones and the Last Crusade! Fiona is on the exact same level and I, for one, was glad to see Brody get his comeuppance as he did. Honestly, it just made me love Papa Legba even more when he refused to grant Fiona immortality because of her literal soullessness.

It occurs to me that I’ve written 911 words and have not once mentioned Stevie Nicks beyond a procedural referencing of the episode’s title. There’s a good reason for that: Stevie Nicks’ cameo did not need to happen. She’s introduced as the hallowed “White Witch,” though her role in the coven goes completely unexplained.

And while it’s a joy to see Misty Day (Lily Rabe) fainting and fawning over Stevie like we knew she would, the rest of the Fleetwood Mac singer’s screen time is spent putting on a private concert for the coven on the school piano. That’s it. Coven literally pulled a Conway Twitty from Family Guy. It didn’t further the plot; it didn’t develop any characters; it just wasted valuable airtime that could have been better spent by having Kathy Bates scarf down another Jack in the Box cheeseburger.