Who Is The Doctor’s New Face? There is a recurring theme in the first episode of the latest Doctor Who series. That theme, is The Doctor’s face. What’s better than conspiracy theories and the excuse to sit on Google Images for an hour or two? NOTHING!

The Question Of The Doctor’s Face

Without going into too much detail (in case you haven’t seen it yet) the hot topic of the first episode of Doctor Who is his face. His face has changed. I don’t know whether you heard about this yet or not, but Matt Smith is no longer playing The Doctor and Peter Capaldi is. (That was sarcasm, everyone’s heard about it forever).

That means their faces changed. Their faces are remarkably different from one another because of reasons that science has yet to discover the answer to. But it’s come in handy for this latest series where The Doctor has decided that after thousands of years of maybe not helping as well as he could have, he’s going to make things right.

So begins the questions, in relation to The Doctor’s face…. They are VERY angry eyebrows.

Who Is The Doctor’s Face?

I’m just going to get my favourite theory out of the way first. This is not the first time that Capaldi’s face has appeared in the Doctor Who universe. If you’re a fan of Torchwood, you might remember that rather heartbreaking episodes where aliens came to Earth, demanded to be paid in children (which apparently were like drugs to them) and Earth complied because humans are terrible. Capaldi was in those episodes and his character’s decision gave the entire thing an even darker tone than it already had (which is impressive, given the plot).

Could it stand to reason that The Doctor with his amazing un-pudding-like brain has somehow registered that man’s face? Could it be that somehow, somewhere, The Doctor has not only gained knowledge of what happened, but of that particular man’s actions during that time? The actions were questionable at best and heartrenching at worst. (No, I’m not going to tell you what happened, you’ll just have to watch the episode and/or read Wikipedia to find out,t he way the rest of us had to). Could The Doctor be sending himself a constant reminder of the destruction that occurs when he doesn’t make himself available to save Earth?

But there’s more than that.

Does The Doctor’s Face Matter?

The change in The Doctor obviously has an effect on Clara and there’s a lot of soul searching about this ‘new’ Doctor. Is he the same as the floppy guy who was rather dashing in a bowtie? This sort of thing has been the subject of jokes in the past:

But what I think they’re trying to do, in asking this question of Clara, is make the audience think. At least, I hope they’re being that clever. It’s no secret that Matt Smith is rather good looking and that between he and David Tennant the romantic feelings of the fanbase rose. 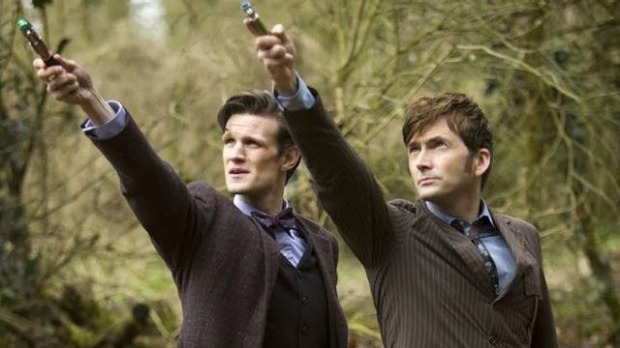 Seriously, who didn’t get a little goosebumpy seeing those two together?

Peter Capaldi, I think, has his own attractiveness. But then I like angry Scottish people in general, so I might not be the best person to talk on attractiveness of Doctors.

Ye can no tell me that’s not attractive.

By Clara being the subject of questions about how she feels about The Doctor, the fanbase is asked those questions too. Afterall, isn’t the companion just a representation of us? Maybe that’s why some of us can’t stand one companion, but love another. We all have our ‘favourite’ Doctors. But if The Doctor is always The Doctor, who are we to say one is better than another? Are we ‘truly’ fans of The Doctor if we say “This one is too old” or “That one isn’t pretty enough”? If those are the questions they’re trying to get us to ask ourselves, as fans of the show, I think they’ve framed it all in a very clever way. If that’s not what they meant, well, too bad they shouldn’t have written it all so well that I wanted to be involved in the discussion!

Whovians have thrown around theories for years. We can be cynical and say it’s all a marketting ploy, mixed with the necessity of swapping out one actor for another because it keeps things interesting. We can be romantic and say it’s just the wax and wane of the Universe expressing itself through the Doctor’s everchanging appearance but constant belief in basically doing what’s right. Or we can be sensible about the whole thing and say it’s probably a bit of all of that and something else as well.

So go on, answer it. We have a comments section and everything….