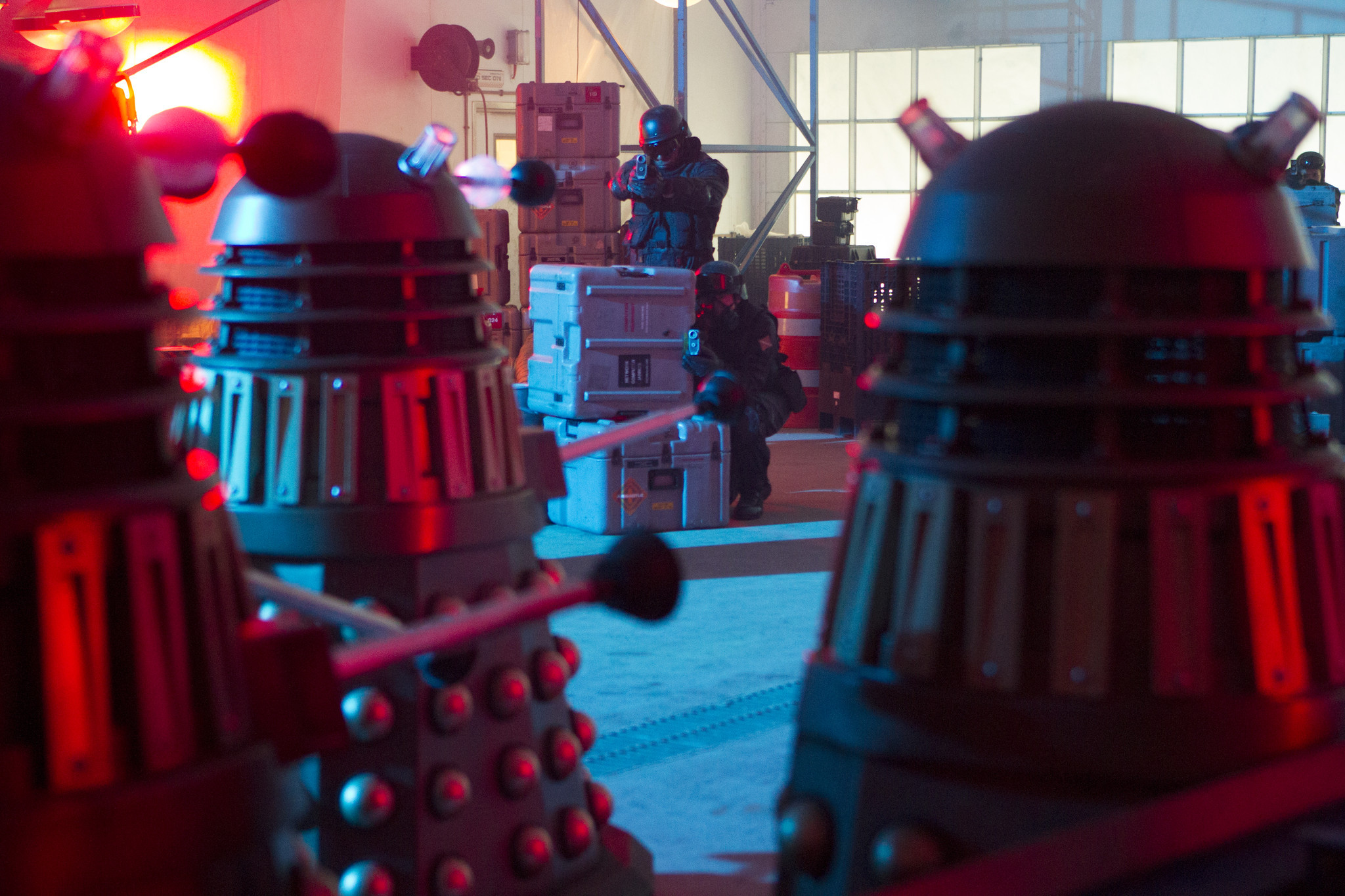 Another episode of Doctor Who takes us where we’ve never been before in “Into the Dalek.”  We get a chance to see the inner workings of the Doctor’s most diabolical enemy.  However, despite seeing something so new, the episode on the whole feels a bit derivative.  But don’t take my word on it.  Take a closer look at the second episode of Peter Capaldi’s run as the Doctor ventures into darkness.

The episode begins with a Dalek warship chasing down a small resistance shuttle.  One pilot is dead with the other struggling to avoid Dalek fire.  Just as it seems like the ship isn’t going to make it, the Tardis appears to rescue the surviving pilot.  She is angry and scared at first, appearing in a strange new place with her brother left to die.  However, she calms down and is returned to the rebel base.  She tells her commander that the man who saved her is a “Doctor,” and that the commander should take him to the “patient”.  The patient is an injured Dalek.

We then visit Clara’s school so we can meet our secondary companion for the season.  Danny Pink is a veteran turned schoolteacher with a troubled past.  He and Clara have some awkward sexual tension until eventually, she asks him out.  Just then, the Doctor interrupts Clara’s plans and whisks her off to help fix a broken Dalek.  Why, you might ask?  The Dalek has declared vengeance on all Dalek-kind.  He asks Clara on the way whether he is a good man, and she can’t answer.

In order to fix the Dalek, the Doctor, Clara, and a few soldiers get into a shrinking machine a la “Fantastic Voyage.”  The mini-surgeons are deposited into the Dalek’s eyestalk and they begin to search for the damage.  One soldier tries to use a grappling gun to repel down the inner chamber, but it seems to hurt the biomechanical monster.  Suddenly antibodies appear and disintegrate the soldier.  The others escape down a tunnel that leads them eventually to the Dalek’s nuclear power core.

The Doctor finds a giant leak in the battery, dangerous for both them and the Dalek.  However, before sealing it up, the Doctor becomes skeptical of the Dalek’s change of heart.  The Doctor asks the Dalek, who he calls “Rusty,” what made him decide to destroy all Daleks.  He responds that he saw a sun being born, was inspired by the persistence of life, and realized that life was beautiful and shouldn’t be exterminated.

With this, the Doctor repairs the broken power cell and the Dalek is repaired.  However, this reboots the morality blocker and the weaponry of the Dalek, causing it to go homicidal again.  It contacts the Dalek warship and summons them to the base.  The Doctor, instead of correcting his mistake, simply mopes about the impossibility of a Dalek ever being good.  Clara immediately smacks him for his prejudice, saying he missed the lesson.

The lesson is in fact, that a good Dalek is possible, but it is fighting against its programming.  They try to get to Rusty’s memory banks but it’s at the top of the machinery.  One soldier decides to sacrifice herself by using the grappling gun to get everyone up.  The antibodies get her but she wakes up in Paradise with the mysterious Missy woman from last episode.

As all of this is happening the Dalek fleet has broken through the rebel defenses.  All hope seems lost but Clara finds the repressed memories of the sun being born and switches them on.  The Doctor uses some kind of mind meld to teach the Dalek his way.  Rusty looks into the Doctor’s heart and sees his hatred of the Daleks and finds the hatred beautiful.  This makes the Doctor ashamed of his prejudice and disappointed in his inability to create a truly good Dalek.

As a small consolation, Rusty saves all the humans and sends out a retreat signal, telling the Daleks that the rebel base was set to self-destruct.  Before Rusty leaves to continue his mission of Dalek extermination, he remarks that the Doctor is a good Dalek.  The only surviving soldier from the mission begs the Doctor to take her with him, but he says he won’t take a soldier.  Clara tells the Doctor she doesn’t know if he’s a good man, but at least he tries to be.

This episode feels like a retread of “Dalek” from season one.  In fact, Rusty’s comment is almost exactly identical to the Dalek saying “You would make a good Dalek.”  Whether this is purposeful or not, the episode feels like familiar territory.   Even going inside a robot with antibodies was used in “Let’s Kill Hitler” with similar effects.  The Doctor grows little and no new elements are introduced to spice up the old story.

Capaldi’s Doctor seems to be reminiscent of Christopher Eccleston’s portrayal, being goofy and alien, but also angry and unsympathetic.  He plays the role well, but he’s a Doctor who isn’t as relatable as many others.  Clara is used well as a teacher for the Doctor as well as a moral center.

If all of the episodes in this season continue to be retellings of old episodes, I’ll be extremely disappointed.  Still as far as repeats go, this episode is still fun to watch and the show continues to provide solid sci-fi action with a bit of moral dilemma mixed in.