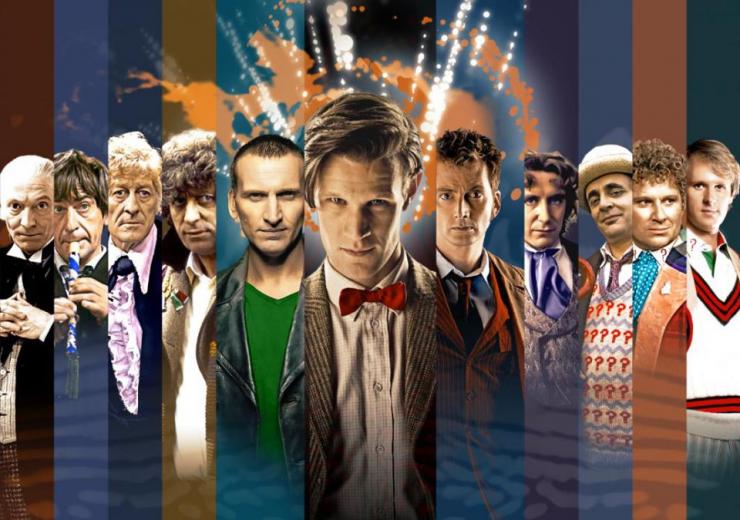 Doctor Who, the 1960’s sci-fi TV show about a time traveling alien and his many companions, is a show that often sparks debate amongst its fans.  Its scope is so wide and varied because over its more than fifty year run it has had dozens of writers, more than a few show-runners, directors galore, and even a baker’s dozen of actors starring as the titular Doctor.   Many traditionalists find the rebooted “New Who” to be disrespectful of the continuity set up in the original show’s run and a silly excuse to watch young, hot actors shout catch phrases.  The more recent generation of fans often calls “Classic Who” a cheap-looking, slow-paced, campy hodge-podge of a show, best left to the 40-year-old virgin demographic.  David Tennant fangirls call everything not David Tennant related complete rubbish and go back to ogling seasons two through four.  Still, all Doctor Who fans, or Whovians as they prefer to be called, will tell you emphatically that you have to watch this show.

As it happens, one of the points of argument that is fought the hardest between fans is how to best introduce their friends into the folds of the Whovian fandom.  Many say you must start at the very beginning with “An Unearthly Child” from 1963.  Others would prefer the uninitiated begin at the rebooted show with “Rose” from 2005.  David Tennant fangirls insist you just watch “The Christmas Invasion” and stare at David Tennant’s sleeping body for fifteen minutes.  Most will insist that the only proper way to initiate a new Doctor Who fan is the way they were introduced, whatever that may be.  I believe that there are many ways to begin watching Doctor Who, and the most important thing is to pick which one works best for you.  So, let us put on our scarves, our funny hats, and our brainy specs as we explore the pros and cons of where you start your journey through time and space. Allonsy!

Beginning with “An Unearthly Child” certainly has its benefits.  It’s a very strong episode with good writing, if a bit slow paced.  It introduces all of the characters and plot elements as if you’ve never heard of them, because at the time nobody had. This was the episode that started it all, so for those wishing to start their journey at the start, this is the best introduction you’ll get.  However, the show has clearly aged and modern viewers may seek a more conventional three-act-structure in an hour rather than four half-hour bites.  William Hartnell is a fantastic doctor, stern but fair, though his less than chipper demeanor may alienate new viewers (no pun intended).  All in all a good beginning for those who want the full experience and don’t mind a bit of a slow start.

The New Who Approach

I have a hard time personally recommending starting with the 2005 reboot.  “Rose” is a poorly paced and confusingly written introduction to the beloved franchise.  The episode chooses to focus on the human companion, Rose, rather than the Time Lord we all know and love.  You don’t even find out he’s a time traveler until the very last line of the episode.  Christopher Eccleston suffers from some of the same issues as Hartnell with a personality that can be obtuse and hard to sympathize with.  The special effects and plot have not aged well even though the episode is less than a decade old.  In one scene a living CGI trashcan that looks like it came from a game of Crash Bandicoot eats one of the main characters.  I hope that gives you some idea of the tone of season one, New Who.  If you want to watch all of New Who and have a decent sense of its very rocky start, check this out but otherwise you may want to save season one until after you see the best the show can do.

Pick a Who, Anywho!

If you’ve just decided to start watching Doctor Who, it may be because so many of your friends are already part of the Whovian clan.  Use this as a resource and ask your friends what their favorite stand-alone episode is.  Episodes such as “Blink” and “42” have been praised for being self-contained but wildly entertaining and can help give you an understanding of what a typical episode is like before diving in at one of the previous two starting points.  Personally, I would recommend my favorite episode “A Christmas Carol” which, with its whimsical tone and imaginative take on the Dickens classic, not to mention a brilliant performance by Michael Gambon, will quickly get even new viewers into the Christmas spirit.  But don’t take my word on it; take your friend’s word on it.  Your Whovian friends will be sure to pick a biased and extremely personal episode, but an enjoyable one just the same.

For those who want to sample the full extent of Doctor Who’s history in a short time, Netflix provides a fantastic solution.  They are currently streaming eighteen stories from Classic Who.  These span all the way from the first Doctor with “The Aztecs” to the seventh with “The Curse of Fenric.”  These sample size episodes of Doctor Who will give you a broad sense of how the show changed over time, and a taste of some fan favorites like “The Pyramids of Mars.”  The issue here is that these episodes aren’t key to the continuity of the show so you miss out on seeing each actor regenerate into the next and what changes in the Whoniverse.  There also is not a single episode from Colin Baker’s run and the TV movie that bridges the gap between old and new Who is lost.

After season one of New Who, each successive season would build on the previous one.  Rose carries over to season two, making those who don’t know her immediately lost.  Season three deals with the fallout from the season two finale.  Season four’s finale is a culmination of all of the previous seasons at once.  Season five however, which gave rise to a new Doctor and a new show runner, Steven Moffat, brings in new viewers fresh.  Season five is the first season since the first that requires no prior knowledge of the audience.  The new companion, Amy, is just as ignorant as you are and the new Doctor explains any necessary back-story for the episode at hand.  The effects are more up to par with modern sensibilities and the plots are more self-aware if not any less campy than their classic counterparts.  The cons of this approach are that Moffat tends to have a very distinct style that differs from the rest of New Who.  He has a pension for being a tad schmaltzy and making his characters too quirky.

There is no “right” way to watch Doctor Who.  That’s why there are so many arguments of Whovian forums.  I expect I’ll receive some flack for being too hard on season one.  You have to decide how important modern TV sensibilities are to you and whether you trust your friends to pick the right episode for you.  I hope this guide will help you make the right decision, so that you can be a Whovian, and you too can argue about who is the Best Doctor. (It’s Patrick Troughton)